Only Conservatives can safeguard the economy, PM tells hometown crowd 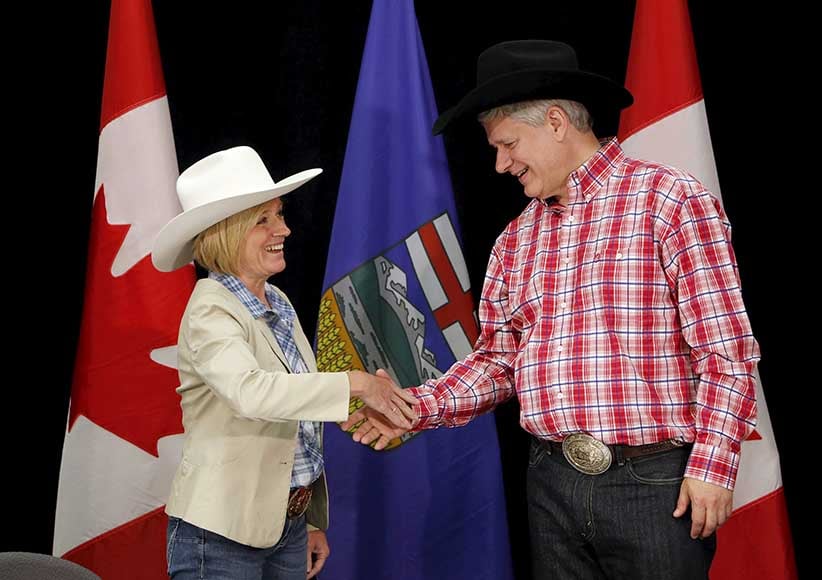 VANCOUVER — Conservative Leader Stephen Harper returned to the party stronghold of Calgary on Tuesday night for his biggest rally of the campaign so far.

Harper stuck to familiar themes saying only the Conservatives can safeguard the economy, on a day when he may have opened a new battlefront with Alberta’s NDP premier.

After a campaign announcement Tuesday morning in North Vancouver, Harper said Alberta has fallen deeper into recession since Premier Rachel Notley was elected in the spring.

“And the recession has been made worse because the NDP government came in and followed up by raising taxes on everybody.”

Notley, who won a majority government by a landslide on May 5, has hiked taxes on large corporations to 12 per cent from 10 per cent and increased personal income taxes for those making more than $125,000 annually.

Harper had a previous skirmish with Notley at the beginning of the campaign.

In early August, the Conservative leader criticized the Alberta government for raising taxes and fees and delaying a full budget until the fall.

“It’s a disaster,” he said at the time. “One rejected by the Alberta population.”

“The current economic climate is caused by the global drop in the price of oil and the failure by both the provincial and federal Conservatives to diversify the economy and save when times were good,” Ceci said in an email.

Notley has said Harper needs to accept that Albertans have endorsed her party and that since her government was elected, it has replaced a “regressive” flat income tax with better taxation.

David Taras, a political scientist at Calgary’s Mount Royal University, said the tactic of picking a fight with Notley could be a double-edged sword for the Conservative leader.

“Using the same logic, Notley could ask whether the recession in Canada as a whole was brought on by the Conservatives being in power and their failure to invest in jobs,” Taras said.

“Politically it makes sense for Harper to link the Alberta NDP with the federal NDP so that the bad news from Alberta can be used to taint the Mulcair campaign.”

Harper has been touting his government’s economic record, which was topped off this week by an unexpected $1.9-billion surplus in the 2014-2015 fiscal year in the buildup to a national leaders debate Thursday on the economy.

The surplus was achieved in part by departments under-spending their budgets by $8.7 billion — what is referred to as lapsed funding and which critics deplore as spending cuts by stealth. The Conservatives had budgeted for $7.2 billion in lapsed funding but wound up with $1.5 billion more than anticipated.

While in North Vancouver, Harper announced plans to provide tax relief for single and widowed seniors.

The Conservatives committed to a $2,000 single seniors tax credit, a measure the party said would help nearly 1.6 million seniors who have pension income.

When combined with the existing $2,000 pension income tax credit, it would double the tax relief available to single seniors beginning in January 2017, Harper said.

The policy would be phased in over four years _ initially costing $23 million and up to $397 million when fully implemented. It would give a single senior up to $600 a year in tax relief, the party said.