All I wanted was for the government to say, 'Yes, it's true'

Lucie Laperle tells her story of being spied on, abused and institutionalized for being gay in the Canadian army—and what Trudeau's apology meant to her 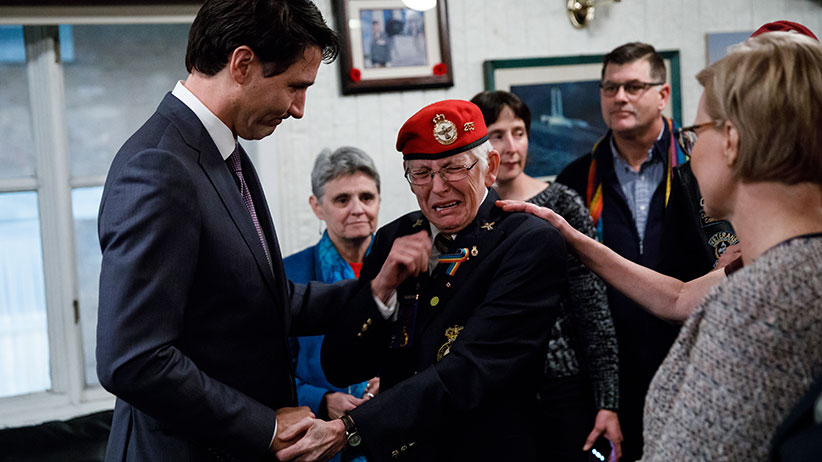 Lucie Laperle was one of the veterans invited to Ottawa for Prime Minister Justin Trudeau’s apology to LGBTQ Canadians for the state discrimination they experienced. Laperle underwent surveillance, interrogation and was institutionalized because of her sexual orientation in the Canadian Forces in the 1970s. She has been diagnosed with PTSD, determined to have been caused by what happened to her in the army. Maclean’s met with her in Shannon, north of Quebec City. This is her story, as told to reporter Verity Stevenson.

At 12 years old, I told my mother and father, I said, “Don’t worry about me, I’m going to be in the army.” I knew. That’s what I wanted to do. And there were very little women enrolled at that time, but I knew I’d fit in. I fit in well with the Girl Guides.

So in 1973, at 18, instead of taking the bus to go to high school in Charlemagne, Que., I took the city bus to go to the recruitment centre on Bishop Street in Montreal. Without anyone knowing about it, I did that several times because getting into the army is a long process.

I finally signed the papers July 26 or 27 and had to be at the Saint-Jean-sur-Richelieu, Que., base for Aug. 12, 1973. I ran to my room, grabbed the envelope, ran back down and put it in front of my parents. My dad didn’t react well because he’d seen his friends and cousins come back handicapped from World War Two. Whereas my mom—still today her reaction surprises me—she read it all very calmly. (She wasn’t warm, my mom, she was a cold woman.)  She said, “Do I have to sign somewhere? Because if I could have gone in my day, I would have.” My mother is the exact same age as the Queen, she was utterly devoted to her, and the Queen had done her army service.

Aug. 12, 1973 came and I reported to the Saint-Jean base, with my little blue jacket and skirt, my little suitcase. I wasn’t gay, I was nothing. I was a real virgin; I’d never smoked pot, I’d never had a drink. And there I was in the army. I remember the accolades were too long for me. Leave me alone so I can start already.

What we loved is that we could do things we couldn’t do as civilians. Like wearing combat gear, transporting a firearm; the drills, the feeling of being in a platoon. When we write each other, still, we sign off, “73-32 forever.” That was the name of our platoon, 73-32. In my first two months in the army, I did everything I’d never done. I smoked my first joint, I got drunk and vomited in the grass. I had my first experiences with men, which were more of a study in anatomy. And I had my first experiences with women. I never questioned my sexuality after that. I was just happy it was clear to me.

By 1974, [some women from the platoon] would go to the gay clubs in Montreal. I’d take my 1972 red and black Ford Maverick and we’d go to Chez Madame Arthur and Babyface. That’s when the Special Investigations Unit (SIU) started gathering information on us and officers started interrogating some of us. We lived in fear, until we were sent to CFB Borden in Ontario to learn English. We’d started going out to the clubs in Toronto, which was just a 40-minute drive away. Imagine, Toronto, a big anonymous city, we weren’t worried about anything anymore.

I was sent to study to become an army electrician, but that didn’t work out and they sent me to an in-between platoon. It’s where they sent you when you’d failed a test or you were injured. We should have known why that one was run by an officer with a rank too high for the job. He reeked of alcohol. On Mondays, he’d pick a girl to do administrative chores for him. He’d take you to a little room with a shower behind his office. I don’t know how many of us he raped. All I remember hearing, now, is, “I’ll show you what a man is.” I had just accepted the unacceptable, that that’s how it was in the army. Eventually, someone must have spoken up because, in 1977, the SIU asked me about it. I told the officer it was all true. I don’t know what the outcome was. I never spoke about it again until last year.

In the meantime, I’d found out they were going to allow women to apply for military police positions. I did as soon as I could. When the personnel selection officer told me you need to be 5’6”, I said, “I’m 5’4”, take your decorations off and meet me in the parking lot. I’ll show you if I can be military police.” He laughed and said with that kind of response, he couldn’t not recommend me for the job.

After six months of on-the-job military police training in Borden, I was sent for training with the intelligence unit. I was one of three women out of 27. It was the hardest work I’d ever done.

Two weeks before I graduated, they kidnapped me. Kidnapped, that’s what it was—and I demanded that it be one of the words used in Trudeau’s apology. They put me in the back of a car. I said, “Excuse me, what’s going on?” and they yelled, “Shut up!” and drove, and drove on dirt roads in the woods until we arrived at a heavily guarded barrack.

They led me into a small room with a bright light shining in my face. When I say war prisoner, that’s how it felt. For hours, two tall Anglais SIU officers shouted at me, pointed at me. “We know you’re gay, admit it, you’re a lesbian.” They even asked me stuff like, “Who’s the male in your couple when you’re having sex?” They wanted me to give them names of my friends, but I never cracked.

I didn’t hear anything for two weeks. On the day of my graduation, our superiors were finally nice to us. “You’re tough, Laperle,” they’d say. My parents had driven from Montreal. Then the Warrant Officer came to get me. I remember telling my dad, “It must be some paper I forgot to sign. I’ll be right back.” But there they were, the two SIU officers who’d interrogated me two weeks before, in the entrance of the building. The Warrant Officer reasoned with them. “Whoa, whoa, whoa, it’s her graduation day and she’s not going anywhere.”

I was posted as a military police officer in London, Ont., at the Royal Canadian Regiment there. But there was word of more interrogations. I couldn’t sleep, I started having stomach problems I still have until this day.

I loved my job, but I couldn’t stand the pressure anymore. I started the process of getting discharged. I was given a date at the end of September 1978 for my liberation. I began applying within London’s civilian police, where I had contacts. But the end came early, Jan. 12, 1978. The captain said, “Cpl. Laperle, this interview can be very short and very easy, or it can be very long and very hard.” I crossed my arms and said, “Bring it.”

He read me the last month of my life, everything I’d done, every single day, everywhere I’d been. They’d followed me to the bars in Toronto, where I’d go one weekend every month as a reward to myself for my hard work. I began to cry and next thing I knew I was in a car on my way to a mental institution. By the time I realized where I was, I was given a shot and dressed in white pyjamas. I was there for two months until the army finally approved my dismissal. I went back to the base to pick up my stuff and my car. My military police partner escorted me to the gate and scratched the parking sticker off my windshield. And that was it. For 35 years, I was mad at myself for having cried that day.

What was left? I went home to Charlemagne. When my dad found out what happened, he said, “Out!” For days, I slept in my car, parked across from Babyface in Montreal. I found a room to rent in Longueuil and started working odd jobs. I caught shoplifters at a department store. I worked security at the airport in Dorval. I stacked boxes at an office supplies store. I had so much rage inside. I was untenable, I picked fights and exploded at small inconveniences. I didn’t see my father for another 15 years.

In 2014—after having re-applied to the army in the late 1980s and early 1990s and having been discharged again—I snapped. I couldn’t live with it all anymore. My partner had left because I’d become unbearable. (We’ve been together for 25 years now; we’ve been through hell together.) Since, I’ve been diagnosed with post-traumatic stress disorder, but at the time, I had no support, I hadn’t spoken about anything. So, I woke up one morning that November, I went to the bridge here in Shannon and I said, “I can’t do it anymore.” I was at retirement age without any money because I hadn’t had a career. I was never able to apply to become a police officer because the SIU officers told us, “Don’t even try … because your crime will be revealed.” 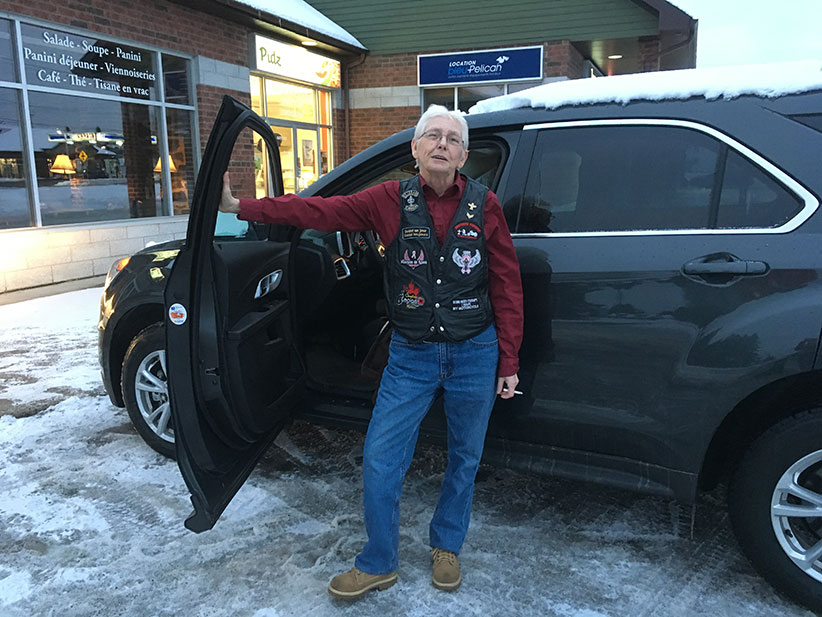 I must have been there an hour and I couldn’t do it. I hopped in my car and went straight to Veterans Affairs. I said I needed help now. They saw me and, within a week, I was set up with a psychologist and psychiatrist. I have been compensated. But all I wanted was for the government to tell me, “Yes, it’s true, what happened to you.” I wanted to be acknowledged, I wanted my veteran ID card and I wanted my Canadian Decoration medal for 12 years of service (I’m short of that by less than 100 days). It’s all I’m missing.

The satisfaction of sitting there in Ottawa… I didn’t think I’d hear it before I die. We felt at home in Parliament. I joked that it had never been so gay. Some of us got to meet the Prime Minister afterwards. I spoke with him for a good 20 minutes, told him what happened to me. He took me in his arms (he’s really tall) and said, “I am so sorry.” I could see he really meant it. I said, “I’ve been waiting for this for 40 years,” that’s when I started bawling.

I’m happy. The apology was well-done. After crying and telling him my story, I said to Justin: “Tell your wife I say hi. I think she’s pretty cute.” We both burst out laughing.