All-party committee will study how to sanction Trudeau

From the mundane to the bizarre, the Liberal-dominated committee will have a variety of options from which to choose 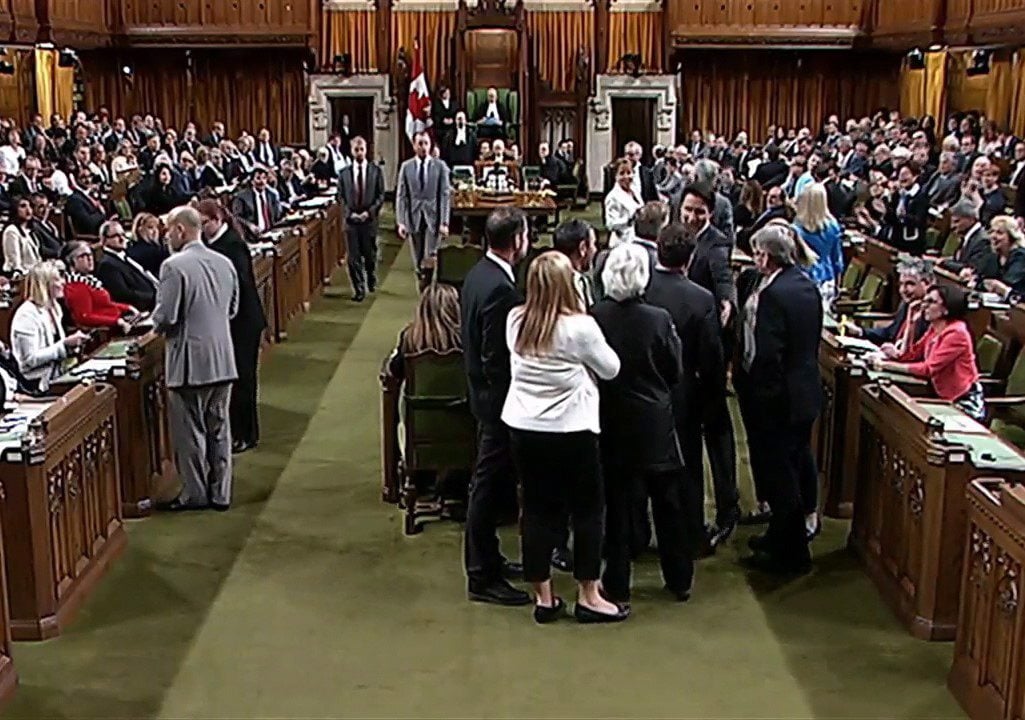 OTTAWA — Prime Minister Justin Trudeau has apologized for his role in last week’s parliamentary pandemonium, but he’s not out of the woods yet.

The all-party committee of procedure and House affairs —a group of political allies and foes alike — will gather to examine the issue after MPs return to Ottawa following this week’s holiday break.

The Liberal-dominated committee will have a variety of options to choose from when it comes to dealing with the question of privilege that followed Wednesday’s physical encounter prior to a vote related to the government’s doctor-assisted death legislation.

“There is a long list and throughout history, when members have behaved poorly, various options have been used,” said Conservative House leader Andrew Scheer.

The possibilities range from the mundane to the bizarre.

The committee could simply recommend, for example, that Speaker Geoff Regan clarify expectations of behaviour.

Or it could recommend that Trudeau be called to the bar — a brass rod at the main entrance to the House of Commons — to be admonished by the Speaker.

It could go even further and recommend that Trudeau be suspended for a period of time, or even expelled.

And if they really want to show him who is boss, they could recommend the sergeant-at-arms take Trudeau into custody.

Such as thing has not happened since 1913.

The committee does not have the power to punish Trudeau directly, only refer a course of action to the House of Commons, which can then accept, reject or ignore its report.

The committee could ask Trudeau to testify about his version of events, but has no power to compel him to do so.

Trudeau has said he is prepared to accept the decision of the committee and respect the will of the Commons.

Related reading: Justin Trudeau: ‘I expect better of myself’

But since the Liberals have a majority on the committee, one expert says it is unlikely Trudeau will face any official sanction at all for grabbing Conservative whip Gord Brown by the arm, elbowing NDP MP Ruth Ellen Brosseau in the process.

“It’s hard to say what the committee might do, although one has to keep in mind that the Liberals have a majority on the committee,” said retired House of Commons law clerk Rob Walsh.

He thinks the most likely result will be a recommendation that everyone accept his apology and move on.

“In all likelihood, they will not want this matter to get any more time than is absolutely necessary,” he said.

Liberal MP Arnold Chan said he did not want to prejudge the outcome.

“I obviously will be happy to listen to what my fellow colleagues have to say on all sides and then we will take it from there,” Chan said.

NDP MP David Christopherson, a vice-chair of the committee, said that since Trudeau said he would participate, he thinks it would be politically difficult for his Liberal colleagues to try to shut things down too quickly.

“I thinks this is one of those times when you are called upon, as difficult as it is, to be parliamentarians, to rise above partisanship,” Christopherson said.

“We’ve had all the drama and arm flailing and over-the-top comments from all around on this thing,” said Christopherson.

He said it is now time for Trudeau and the committee to deal with the issue as parliamentary peers.

“These are grave matters,” Christopherson said.

“These are serious in our world and I know if it was me, once all the politics had taken place in the House and the media and everywhere else, when my reputation was on the line in front of (committee), I would hope all that was set aside and my colleagues would deal with me and my issue as parliamentarians.”