All the Morneau news that's fit to ban in China

Nov. 14: Journalists barred from attending finance minister's speech in China, and the Great One's ungrateful snub to his home country 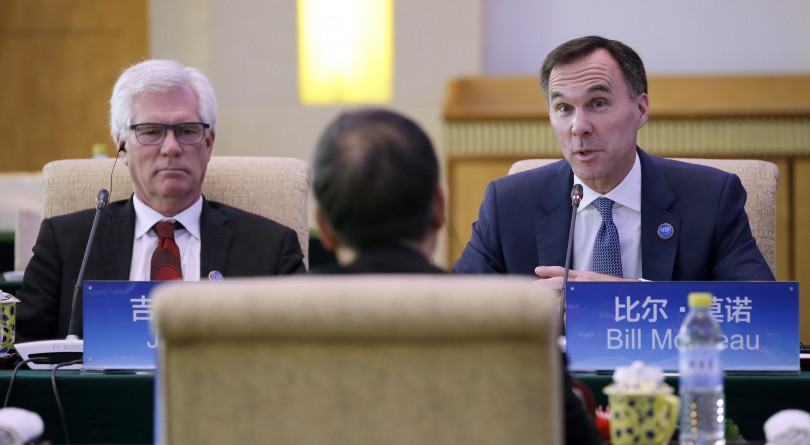 According to a summary from China’s state-run news agency Xinhua, Finance Minister Bill Morneau had this to say about Canada’s trade talks with that country while speaking at a dinner in Beijing: “Canada attaches great significance to ties with China, and the two economies are highly complementary and have great potential for cooperation.”

We’ll have to take Xinhua’s word on that, because journalists were blocked from attending Morneau’s speech, apparently at the request of Chinese officials also speaking at the dinner who did not want media in the room. The Canada China Business Council later called the ban a “misunderstanding” and said that the Chinese officials hadn’t “directly” ordered that media not be allowed in. Whatever the case, the incident came just a day after Prime Minister Justin Trudeau praised the free press as an institution that should be “free-thinking, independent, rigorous, robust, respected.” (Xinhua, CBC News)

Still waiting: A day after acknowledging Canada’s top spy has heard the audio tape of Jamal Khashoggi being killed in Saudi Arabia’s Turkish consulate, the Trudeau government isn’t giving any signal that its stance toward the Saudi’s will toughen. “We are reviewing our arms sales to Saudi Arabia in view of this killing and, obviously, during this period of review no new arms export permits will be signed,” Foreign Affairs Minister Chrystia Freeland said—repeating a line she’s used for several weeks. (Canadian Press)

Thanks, but no thanks: Calgarians got their chance to weigh in on the city’s potential bid for the 2026 Winter Games, and decided it’s not for them. A clear, if not overwhelming 56.4 per cent of voters opposed pursuing the bid. Jason Markusoff explores what the ‘No’ vote means:

Does this make Calgary a No city? There were certainly healthy amounts of defeatism within the anti-Olympics vote—a dread of tax dollars going toward anything beyond stuffing potholes and plowing snow, a disdain for business elites and sunny Mayor Naheed Nenshi assuring the masses what great a deal this would be for the city. A conservative get-off-my-lawn mood is prevailing in Calgary, one born of lingering unemployment woes and disillusion with the NDP governing Alberta and the Liberals leading Canada. Sometimes, the hosting debate felt like the Yes side versus the BAHHHHH side.

But with the cynicism was a healthy dose of circumspection. Two weeks before the plebiscite, Calgarians almost universally celebrated a $245-million new central library, funded primarily through property taxes—the perfect rebuttal to the Games boosters now grumbling “this is why we can’t have nice things.” Beautiful, functional and lasting nice things, Calgary residents can say yes to. But there’s reason to not see equivalent merit in expensing $2.9 billion of public funds for a month-long event in the middle of next decade. (Maclean’s)

It’s been nearly 10 years since Wayne Gretzky was awarded this country’s highest civilian honour, the Order of Canada. He’s never bothered to pick it up:

“It’s just embarrassing,” says Christopher McCreery, an expert on the Canadian honours system. “I’ve probably met 1,000 recipients of the Order of Canada. It’s a highlight of their lives—their country saying thank you.” To make the decision not to collect the insignia is “insulting to the others who get them. All are supposed to be in the same category, yet they think they are on a plane above everybody else,” says McCreery, who has written 15 books on honours, including his latest, The Order of Canada: Genesis of an Honours System, which has a foreword written by Queen Elizabeth II. (Maclean’s)

We’ll take “Things We All Wish We Had” for $800, Alex: It seemed plausible. In an interview with Vulture, Jeopardy host Alex Trebek claimed Trudeau has a buzzer hidden under his shirt that calls an assistant to rescue him from meetings. After launching a thousand Twitter jokes—and the inevitable parody account—word came that no, Trudeau doesn’t have a secret buzzer. (Vulture, Twitter)