All together now: Childcare is not a boutique women's issue

Shannon Proudfoot: Politicians have repeatedly referred to childcare as a mother's problem, undercutting the essential fact that we all have skin in this game 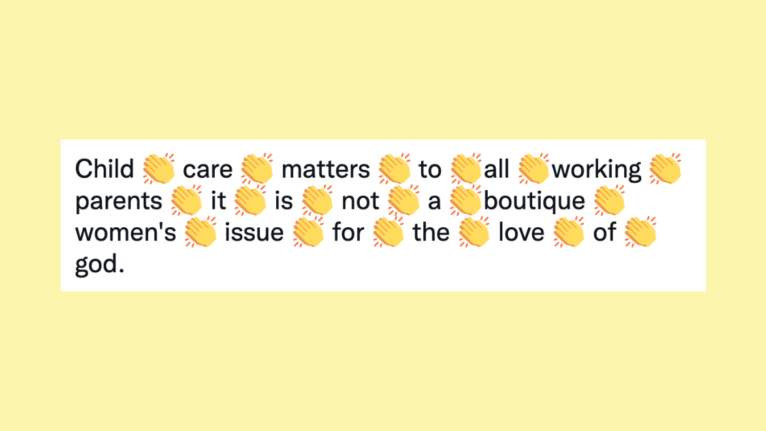 Well that—in the internet parlance of our times—escalated quickly.

On Monday, annoyed by some of the talking points I heard at the announcement of a landmark childcare agreement between Alberta and the federal government, I tweeted this:

A thousand retweets and 9,000 likes later, I guess I’m not the only one frustrated about how childcare is so often framed.

That press conference in Edmonton was staged for the purpose of announcing a $3.8-billion agreement the federal government says will reduce daycare fees in Alberta by an average of half by the end of next year, on the way to creating 42,500 new regulated spaces and providing $10-a-day child care by 2026. Getting that deal inked means that Ontario and New Brunswick are now the only hold-out provinces, as Ottawa tries to make its social-infrastructure moonshot of a national early-learning and childcare plan a reality.

READ: The pandemic is breaking parents

Against a predictably noisy thematic backdrop of small children frolicking at a YMCA (subtext: “Do you want this going on around you while you try to work?”), Finance Minister Chrystia Freeland said, “Childcare is critically important to our economy. It is as much a critical piece of infrastructure as a road or a grain elevator or a railway,” before adding, “Childcare is important for all Canadian women and children and families.”

Prime Minister Justin Trudeau said the last year and a half have made it clear how important it is to have support for kids and families so that parents can work. “Not just for families, not just for those young kids to get the best start in life that they possibly can, not just for moms who are all too often facing impossible choices about whether to be there for their kids or to contribute to their family and to their community,” he said, but businesses of all sizes know that child care is essential for the economy.

Karina Gould, the minister of families, children and social development, trotted out a similar message, saying this plan would be “good for parents, especially mothers.”

Now look, I am being a bit cheap in singling out these federal politicians since they present targets of opportunity this week, because this line of rhetoric that child care is inherently a mother’s problem is so common that it’s pretty much ubiquitous.

But it is bizarre and immensely counter-productive that even in conversations intended to be progressive, childcare is often presented in an offhanded way as a boutique women’s issue. You know, a little something for the ladies, in case they want to sell Tupperware to earn pin money while Junior is at his playgroup. This messaging only reinforces the idea that children are the natural domain and default responsibility of their mothers—which is presumably not what the architects of this national childcare plan are after.

It also transforms childcare from the critical public infrastructure that the Trudeau government has repeatedly described it as and reframes it as a special social policy treat we toss at women. That badly undercuts the message that this is essential undergirding that will have immense payoffs for society as a whole, both economically and socially.

The disruption of the pandemic has rolled back women’s employment gains by decades, in a disconcertingly durable phenomenon economist Armine Yalnizyan has dubbed the “she-cession.” But there is a subtle but important difference between acknowledging that women are more likely than men to quit their jobs or reduce their hours in order to cover gaps in childcare, and making it sound like child care is an amenity just for women, because so are children themselves. One of those messages nods at set of economic, social and personal pressures that need to be equalized; the other makes it sound like this is all an irrevocable and justified state of affairs.

This strikes me as a variation on highly accomplished women who have kids being asked ad nauseam how they balance work and family life, while highly accomplished fathers are asked that on the 10th of Never. All of this treats working fathers as the norm and working mothers as special cases or curiosities. And it treats mothers concerned about, engaged with and sacrificing for the wellbeing of their kids and families as the default, and working fathers doing the same as mythological creatures. Neither is true; both are destructive.

The avalanche of responses to my tweet honestly caught me off-guard, and many of them made different versions of the same excellent point: that when it comes to early learning and child care, we all have skin in this game. People who don’t have kids and never intend to said childcare matters to them so their colleagues who are parents can be focused and available at work, knowing their kids are well looked after. Employers, managers and bosses of all stripes said it matters to them for the same reason, or because someday they will employ the adults those daycare kids grow into, so to have them enrolled in stable, quality programs is an investment in the future.

Of course in practice, many of these childcare burdens are still disproportionately taken up by women. But that’s not an unalterable state of affairs that just dropped on us from the sky. Because guess what happens when an entire society still somehow, in this the year of our lord 2021, thinks kids belong by default to their mothers? Those mothers are paid less, fall into the mommy-track career trap, are taken less seriously and assumed to have one foot out the door and one eye on the kitchen through their working lives.

Which in turn makes it more likely that even a couple that genuinely wants to share parental leave or is trying to come up with a solution for childcare, whether on a long-term basis or for the “Holy crap, one of the kids is sick, how are we going to juggle this today?” emergency that has become so grindingly common during the pandemic, will pick her and not him to take the hit and miss work. It’s not because it has to be that way or was meant to be or even because the individual families involved want it to be that way; it’s because that is the system we’ve built.

These provincial and territorial agreements that are supposed to add up to a national childcare plan could be nothing less than transformative and generational in their impact on the social fabric of this country and the kids and families who will benefit. There are a lot of “ifs” attached to that hypothetical superlative—if the resulting daycare spaces are plentiful and high-quality, if the whole thing survives elections and changes in government, if this meaningfully shifts the choices families can make about childcare and the rest of their lives as a result, if it is economically viable—but the impact could be enormous.

But if part of that project is about building greater equality within families and in society at large—and it should be—then we should talk more ambitiously and honestly about who this is supposed to benefit: all of us.