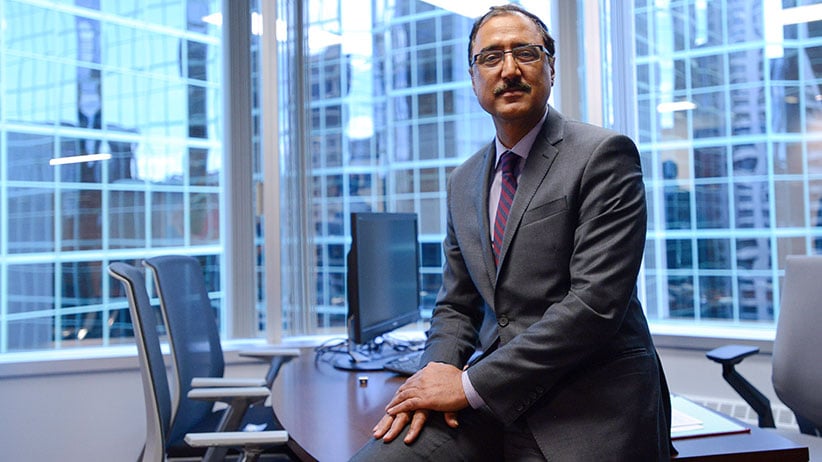 On Thursday, the House of Commons is debating the Trudeau government’s controversial proposal for an Infrastructure Bank to attract private investment for large new infrastructure projects. The NDP wants the provisions for the bank split out of the main budget bill so Parliament can study the bank separately. On Wednesday, Amarjeet Sohi, the minister of infrastructure and communities, discussed the bill with Maclean’s senior writer Paul Wells. Below are excerpts from the interview.

Q: There’ve been a lot of questions in the House of Commons over the last several days about this Infrastructure Bank, which I think a lot of Canadians don’t understand very well. Could you give me the elevator pitch for the Infrastructure Bank? What are we trying to do here?

Q: This depends on attracting private investment—banks, pension funds, sovereign wealth funds. The interest for them has to be that they’re going to get an attractive rate of return. And some people, the NDP in particular, are saying: Why do you need to bring in these private investors who are going to be looking for a return of eight or nine per cent? Why can’t the government just borrow more, at one per cent or less, and finance the projects that way?

Q: Will there be enough of an overlap between the public interest—the things that the government thinks are a good idea—and the private interest, the things that the investors think they can get a return on? Especially because a lot of these wealth funds, the capital they have is in the hundreds of billions of dollars and they don’t write small cheques. Are their projects in the large numbers of billions of dollars that are being contemplated?

RELATED: Why Canada’s new infrastructure bank should be built in Calgary

Q: Could this Infrastructure Bank be the vehicle for privatizing, selling off the airports in Toronto and Vancouver?

Q: While I’m on the subject, though, is this something the government might consider doing apart from the Infrastructure Bank? Privatizing those two big airports?

Q: The other opposition party, the Conservatives, are awfully curious about how it came to be that before that investors’ meeting in Toronto, at the Shangri-La Hotel last November, your office worked with BlackRock on developing your presentation. That’s an unusually close level of collaboration between a government office and a potential private investor.

A: BlackRock has worked with other governments to facilitate engagement with private-sector pension funds. They played that role and they assisted us in that as well. The presentation that you’re referring to is public. It’s on the website. People can see it. There’s nothing secretive about it. The purpose of the presentation was to actually make a case. Make a case to the private sector, why you would need to invest in Canada. Our own pension funds will invest in foreign countries, but they will not invest in Canadian infrastructure, right? That was the purpose of the presentation: to lay out the conditions that exist in Canada that will attract private capital. We’re a very stable country, our financial situation is very strong, and we have the stable market for infrastructure. So why would we not make that pitch and sell Canada to international foreign investors?

READ MORE: What is BlackRock, and why does it matter now in Ottawa?

Q: Part of the reason for that pitch, for that slide deck, for that whole meeting, is another risk here: that investors will take a good look at Canada and say, “It’s too complex, it’s too hypothetical. No thanks. I’m just going to go to Bahrain and build a port for $50 billion.” Is that a real concern? Doing things in Canada is hard. Doing things in authoritarian countries is a lot easier.

A: That’s why we wanted to engage a wide range of stakeholders for the creation of the bank. We had extensive conversations with pension funds, institutional investors, business councils, we talked to unions, we talked to the building trades, chambers of commerce throughout the country. We engaged the World Bank on this, [and the] International Monetary Fund. To understand what we need to do in order to remove some of those barriers that you talk about. Because at the end of the day, if our own pension funds feel more comfortable investing in foreign countries, not in our own country, then there’s something missing.

Q: On the other hand, when the government’s interest and the investors’ interests are very large, in the large number of billions of dollars, and are indistinguishable, sometimes that leads to trouble—corruption, money going where it shouldn’t. I’ve covered a lot of stories in this country where the government got too tight with the construction industry and with big money, and people wound up going to jail. Are there going to be safeguards to make sure that doesn’t happen?

A: I think this is a very good point you’re making. And I think we need to understand how infrastructure is built in other countries, and what role the federal government plays. The infrastructure that will be supported by the infrastructure bank is not federally owned. It will be procured by the provinces or municipalities, not by the federal government. So there’s different layers of accountability built into the system and different processes that are scrutinized by, whether it’s local councils or provincial governments. And further to that, those governments lacked capacity to actually do proper due diligence when they engaged the public sector. So the role of the bank will be to safeguard the public interest by making sure that the deals are structured in a way that the public interest is predominant and always considered.