G7 summit: An expert advance briefing before Trump meets Trudeau and other leaders in Quebec

Trump's tariffs are the wild card, but Trudeau has set the table in Charlevoix for some feel-good moments, too. 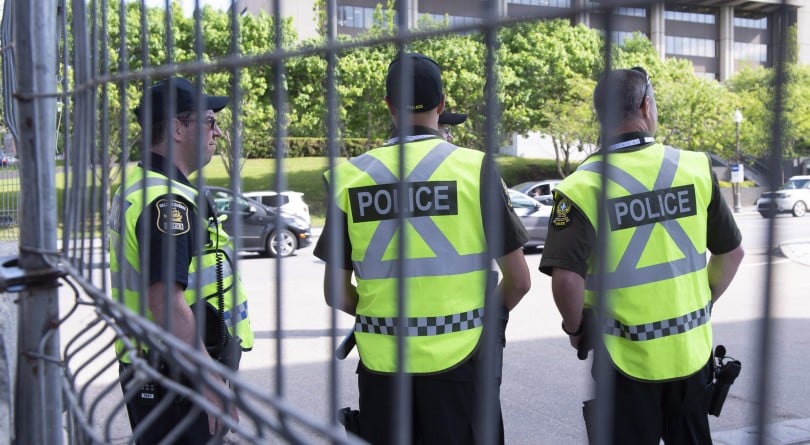 Police officers stand outside a security perimeter surrounding the media centre in preparation for the G7 Summit in Quebec City on Wednesday, June 6, 2018. THE CANADIAN PRESS/Paul Chiasson

Commentary on Group of Seven summits tends to swerve between breathless awe at the concentration of power to eye-rolling cynicism over the superficiality of it all. Somewhere in between lies the reality of what goes on when the leaders of the U.S., Germany, U.K., Japan, France, Italy and Canada, plus the European Union’s leaders, gather once a year to talk policy and politics.

John Kirton, director of the G7 Research Group at University of Toronto, arguably tracks the process more obsessively than just about anyone. So, as Prime Minister Justin Trudeau prepares to host the 44th G7 get-together on June 8-9 in Charlevoix, Que., we asked Kirton for a preview of what’s in store. (His group produced this guide to the Charlevoix summit.) Here are some highlights of how Trudeau likely hopes the meetings will unfold—and some potential pitfalls.

Starting with tough talk on Trump’s tariffs. Although leaders begin arriving at the resort northeast of Quebec City on Thursday evening, the summit officially starts Friday morning. At a working lunch on economic growth, Trudeau and European leaders are expected to vent some ire over the tariffs U.S. President Donald Trump’s recently slapped on imports of their steel and aluminum. “At a minimum, I’m predicting disagreement, maybe even harsh words in private,” Kirton said. But he doubts this early clash will derail the summit, pointing to sources of unity on economic themes, like the leaders’ shared need to reassure anxious voters about the jobs of the future, and their common worries about China.

Changing the tone by delivering on gender equality. As this year’s summit host, Trudeau set up a high-powered G7 Gender Equality Advisory Council, co-chaired by Melinda Gates, of the Bill & Melinda Gates Foundation, and Isabelle Hudon, Canada’s ambassador to France. Council members will meet G7 leaders on Saturday morning. Kirton says scheduling that meeting signals that a “big deliverable,” likely in the form of a multi-billion funding pledge for girls’ education in poor countries, is “in the bag.” Bonus for Trudeau: next year’s G7 summit host, French President Emmanuel Macron, will likely carry on this thrust.

More: Melinda Gates on gender equality, the G7, and Trudeau and Macron as ‘next group’ of world leaders

Talking oceans (but not too much climate change). Trump waited until after last spring’s G7 summit in Sicily to pull the U.S. out of the Paris climate accord. Talking global warming too prominently at this year’s summit would be awkward. Instead, the leaders will target ocean environmental challenges, like reducing the scourge of plastic waste and making coastal communities more resilient. Of course, that resilience is needed because of extreme weather and rising sea levels caused by… climate change. Still, Kirton says the U.S. is okay with the theme—especially as it’s the start of hurricane season, with its annual threat to coastal Florida, Texas, and eastern seaboard states.

Navigating a way to the traditional communiqué.  To be frank, the joint communiqué that usually closes a G7 summit is typically pretty dull. Failing to issue one at all, though, would be anything but. At Trump’s first summit last year in Italy, Kirton noted, managing to produce a communiqué required hard, delicate work. This year, officials in Canada and other G7 countries are being careful not to promise anything. Could that early friction over Trump’s tariffs make it impossible to draft language the U.S. finds acceptable? Kirton suspects Trump will come around. “Once he thinks about it, I don’t think it will be, ‘I really hate Justin, so I’m going to blow up his summit in a really spectacular way’,” he said.