An insider's view of the final week of Andrew Scheer's campaign 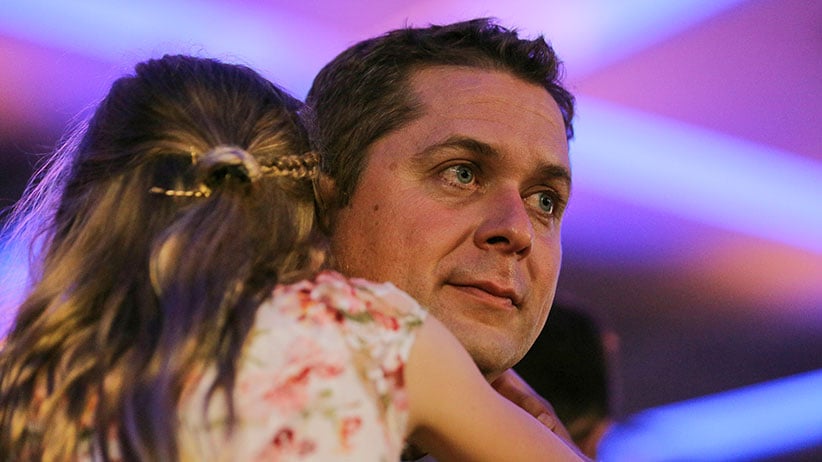 Andrew Scheer holds his daughter moments before learning the results of the Conservative Party of Canada leadership at their convention in Toronto, Ontario, Canada May 27, 2017. (Chris Helgren/Reuters)

To no one’s surprise, the Conservative Party’s leadership race went down to the wire, and Andrew Scheer’s win came on the final ballot by the narrowest of margins. The two frontrunners—Scheer and Maxime Bernier—were seated side-by-side on the convention floor, and observers could watch the two of them on a single TV shot throughout the day as the field narrowed and tensions increased. There was no horse-trading or deal-making because the votes were already in, and by Saturday it was simply a numbers game and a computer crunch. But it was a different mood on Friday, when tactics and strategy were still being played out, and the full week before.

The final week of the campaign had been devoted to the get-out-the-vote effort. Most of the “persuading” had been accomplished after a year or more of campaigning, so getting the identified vote into headquarters before the deadline became all-consuming. For the Scheer campaign, sites were set up across the country to allow last-minute voters to cast a ballot and have them sent to Toronto. In my hometown of Chilliwack, B.C., a lady with three young children—including a two-week-old baby—finally received her ballot at the eleventh hour, only to be told by FedEx that the only way she could get it to Toronto in time was to deliver it to their depot in Langley for overnight delivery. She loaded up the children (and the ballot), drove for an hour to get to their office, and delivered her vote minutes before the cutoff. Efforts like that ensured the Scheer campaign got out more of their identified vote—with fewer spoiled ballots—than the other leadership candidates.

Each leadership candidate had campaigned hard during the race, usually with a particular style or strategy,  sometimes with a very focused or narrow-cast appeal. It was an effective way to raise money, stay in the contest, and identify support. Andrew, for example, was one of several candidates who appealed directly to supply-managed farmers, basically repeating the long-held party position from coast to coast. It proved effective, and was likely the reason for his strong showing in rural parts of Ontario and Quebec.  But he was also careful not to colour outside of the party positions on other issues. While some social conservatives, for example, urged him to throw out the party’s position on the definition of marriage, he pushed back and refused to budge. Some of that vote drifted predictably to single-issue candidates on the early ballots, but by the end of the evening, Andrew’s promise to listen to and respect decisions of the Party’s policy convention appeared to prove decisive. You can raise money on a narrow agenda, but it’s almost impossible to gather enough support to win.

But several thousand last-minute votes were still at stake on the final weekend, and wooing them was also critical. While there were no efforts to make any last-minute deals amongst the leadership candidates—other than Kevin O’Leary’s gob-smacking withdrawal from the contest, there really hadn’t been any deal-making in the campaign—the speeches on Friday mattered to the undecided. Bernier’s decision to use his time for a video presentation proved risky, while Scheer’s focused message on unity and conservative principles seemed to connect to those seeking both. For party members, remaining united trumped everything else; it had been one of Andrew’s core messages throughout the campaign, and the 9,000 people who voted on the last day of the campaign clearly heard his call.

NATALIE PON: A young Tory on Scheer, and ‘finishing the sentence’

In any political party or organization, the members and adherents tend to follow the personality and style of their leader, so in the Scheer campaign there was no effort to change anything for the convention itself. With Andrew, what you see is what you get, so the genuine and thoughtful messaging of his campaign permeated his team. There were no last-minute declarations of imminent victory, no clarion calls to “get behind my candidate or else,” nothing said or promised on the floor of the convention that hadn’t been said and promised in public, dozens of times. Andrew’s insistence that he was the unity candidate, and that a promise in 2017 was a commitment for 2019, meant that freelancing amongst staffers simply didn’t happen. Discipline, always essential to communications and strategic implementation, was really self-discipline by convention day.

During the actual voting, a couple of things hit home. First, the event was actually exciting! By allowing a few minutes between each ballot result, the tension built and built with each announcement. It made for good TV, and the convention watchers didn’t have a dull moment all afternoon. After 18 months of interminable campaigning, it was nice that the end had some pizzazz. Second, watching former minister Peter MacKay—he was one of the event’s TV commentators—made me remember Peter’s insistence during the merger talks between the Canadian Alliance and PC Party that this method of choosing the leader was the way forward. It’s really his baby, and as the excitement grew in the hall it must also have been building within him, too. Whodathunk this equal-points-per-riding voting system would lead to such high drama?

As the vote neared its conclusion, some of the personal and family dynamics became obvious. Maxime’s face was showing the tension by the last ballot, and the common look for both finalists was heavenward—watching the big screen and trying to predict the results. Andrew would sit for as long as he could stand it, then pace the floor in an aimless circle. The family was feeling the tension too, and his children took turns sitting on dad’s knee, sensing that something important was happening, and wanting to be close to him.

When the announcement came, it seemed like the culmination of a 13-round, come-from-behind heavyweight contest. Right up until the final moment, Bernier led on every scorecard, and while the challenger Andrew whittled away at the lead, the question became: would he have enough rounds to catch the frontunner? When the decision was announced, it had all the feeling of ABC Sports’ famous sporting expression: “the thrill of victory, the agony of defeat.” Team Scheer was cheering in tear-filled joy, while Bernier’s supporters understandably had tears of another kind. Fortunately for the party, the two men genuinely like and respect each other, but there can only be one winner, and party members (regardless of who they had supported along the way) seemed almost universally—and instantaneously—supportive of the new leader.

Unlike a regular job interview, a political party’s leadership race often seems otherworldly. The interview lasts for months, and a candidate seeking the position is asked to fulfill an impossibly complex job description. You have to be able to unify and focus disparate groups, to raise huge sums of money, to understand all policy options, to communicate effectively, be humorous, and demonstrate gravitas, all while the cameras are rolling and every single word is parsed for meaning—and while ideally being young enough to demonstrate generational change, yet experienced enough to inspire confidence. As Andrew headed for the stage to address the crowd and the nation, what it meant was likely still a little unclear, even for him. He had been true to himself, he had earned the victory, but the real work of fulfilling the job description was just beginning.

Hon. Chuck Strahl was a member of Parliament from 1993 to 2011 for the Reform Party, the Canadian Alliance, and the Conservative Party of Canada. He was the national chair of Andrew Scheer’s Conservative leadership campaign.