Shannon Proudfoot: With all the pacing of a Facetime call with your grandparents, the Liberals survived a puzzling confidence vote of their own making 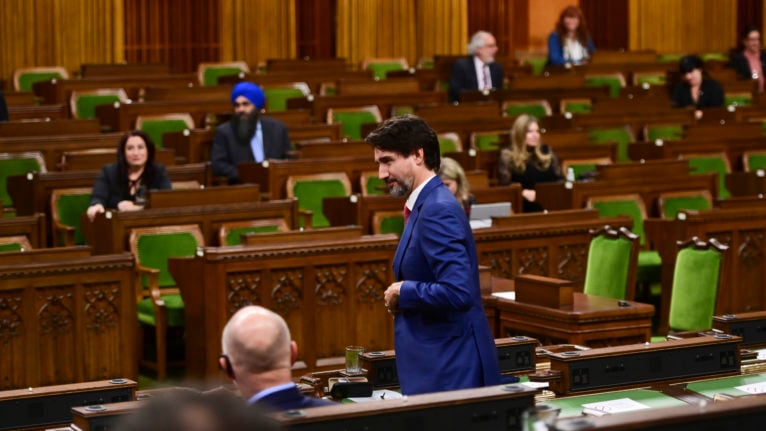 Frankly, having a federal election by accident would have been the most on-brand way to finish this airplane vomit bag of a year, but 2020 continues to surprise.

And it’s probably for the best that the outcome of a confidence vote in the House of Commons on Wednesday afternoon was pretty much known in advance, because a slow, technologically janky virtual roll call—the second of the afternoon, God bless us everyone!—is an inauspicious way to topple a government and send the country to the polls. Even if that toppled minority government would have been entirely responsible for such a chain of events.

The motion that MPs voted on would not normally have carried anything close to this weight, except that Prime Minister Justin Trudeau decided it must, for reasons the Ottawa bubble is still puzzling over.

The Conservatives wanted to establish a special committee to examine the WE Charity scandal and other alleged improprieties of the government related to pandemic spending, with the power to call ministers—including Trudeau—and compel the release of documents. Other committees had been examining the WE fiasco, but they had been hampered by Trudeau’s prorogation of Parliament and Liberal filibustering.

Trudeau declared this meant the opposition had implicitly lost confidence in the government, and as such, off to the hustings they should all go. “It will be up to parliamentarians and the opposition to decide whether they want to make this minority Parliament work, or whether they’ve lost confidence in this government’s ability to manage this pandemic,” he said on Tuesday.

This escalation seemed wildly out of proportion. Did Team Trudeau simply like the looks of opinion polls lately? Were they just really not-excited about a protracted parade of chatter and headlines about an unflattering fact-finding mission, even if the committee didn’t ultimately shake loose any serious skeletons? Was the government on some deeper level annoyed and offended by parliament being a bit rude to them?

Conservative Leader Erin O’Toole amended his motion to stipulate that it should not be considered a matter of confidence and changed the name of the committee from “anti-corruption.” But that was not sufficient to soothe the bruised feelings of Government House Leader Pablo Rodriguez, who remarked, “If you write a book about Frankenstein and you call it Cinderella, it’s still a book about Frankenstein.”

The Bloc Quebecois committed to voting with the Tories, so it was largely up to the NDP to play whatever is the opposite of kingmaker.

On Wednesday afternoon, a couple of hours before this game of chicken was scheduled, NDP Leader Jagmeet Singh held a press conference. He started out strong and seemed to offer the headline to his decision right off the hop, declaring, “New Democrats will not give Prime Minister Trudeau the election he’s looking for.” But then Singh absolutely refused to indicate what his caucus would do, despite repeated and increasingly exasperated inquiries from reporters.

“You’ll find out the answer to that very soon,” Singh teased.

The Conservatives and Bloc Quebecois together added up to 153 votes. The Liberals—minus the Speaker, who would only vote in the case of a tie, but with the addition of ousted Liberal MP Marwan Tabbara, now sitting as an independent while awaiting trial for assault—amounted to 154 votes. Still in the wind were 24 NDP members, three Greens and one independent, in the person of former Justice Minister Jody Wilson-Raybould. Perhaps you recall that there was some unpleasantness when she was ejected from the Liberal caucus?

So the question of whether the NDP would support the government or abstain was not a small one. If the NDP bowed out, the numbers were so close that Wilson-Raybould could hold the fate of a diminished version of the government in which she was once a star, right there in the tip of her un-muting index finger. Or, with every single member needed to pull the numbers for each side, voting problems—of which there have been plenty since parliamentarians, along with everyone else in the white-collar world, learned to work remotely—could trigger a general election by way of tech gremlins.

The Greens sucked some of the dramatic wind out of Singh’s sails when they announced they would vote against the Conservative motion.

Question Period went round and round the same non-questions and non-answers, with various Conservatives demanding to know if Chief Public Health Office Theresa Tam had given Trudeau the thumbs-up on the obviously terrible idea of a pandemic election. Trudeau, for his part, staged a one-man festival of passive-aggression, suggesting that every other party in the House was champing at the electoral bit for various self-interested reasons, while his party was merely trying to govern. “Our focus is on continuing to deliver for Canadians,” he said. “It is up to the opposition whether they want to make parliament work.”

When the voting finally happened, they first plodded through the entire roster, with most MPs chiming in electronically, to vote on an amendment to the motion. The Liberals and NDP joined together to vote against the amendment and the Bloc and Tories voted in favour, foreshadowing the confidence vote and adding an extra dash of “anti” to the anticlimactic proceedings.

Then came the confidence vote itself, unfolding with all the smooth narrative and rapid pacing of a Facetime call with your grandparents. Liberal Emmanuella Lambropoulos had trouble un-muting herself, then had trouble re-muting herself afterwards, so that her colleagues could briefly hear and see her doubled over her desk, hands clutched to her face, snickering in embarrassment. Ahmed Hussen, the minister of families, children and social development, reappeared briefly on the screen again after he had voted, removing his headset and rolling up the cord with a distinct “Okay, I’m outta here” energy.

In the end, the Tories and Bloc added up to 146 votes in favour of the committee and, ridiculously, a snap election, and 180 Liberal and NDP MPs, plus one seriously unimpressed independent, voted against.

Wilson-Raybould voted with the government, but took to Twitter after to protest the whole exercise. “The choice this Gov’t placed before us—a potential election during a spiking pandemic or seeking to avoid transparency/accountability for ethical wrongdoings demonstrates an utter lack of leadership,” she wrote. “Imagine risking the health of Cdns to avoid taking responsibility. Shameful.”

Of course, having declared a pedestrian motion to establish a committee to be a matter of confidence once, it’s not difficult to imagine that the government might categorize other minimally thorny matters the same way in the near future. That possibility may have less to do with a new Parliamentary precedent being set than with a behavioural one: when something works, you tend to do it again.