Andrew Scheer explains his plan for that pesky so-con agenda

Politics Insider for Aug. 30: Scheer goes on the record, the election ad war commences and Canadians want climate action they don't have to pay for 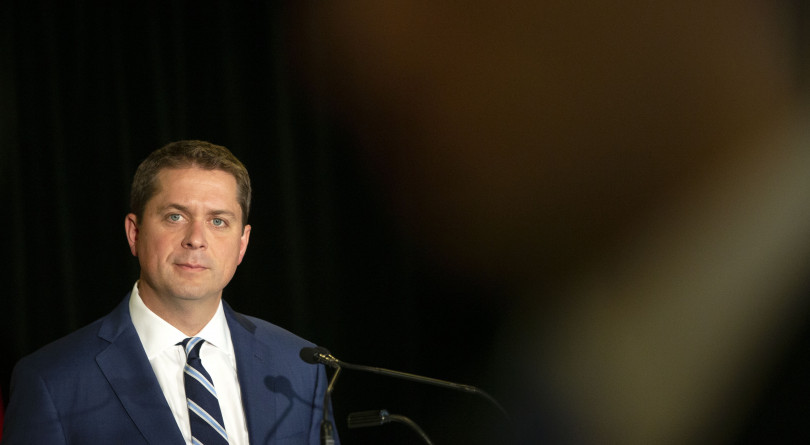 Federal Conservative leader Andrew Scheer takes a question from a journalist during a news conference in Toronto, on Aug. 29, 2019. (Chris Young/CP)

After eight days of conspicuous silence while oppo research-fuelled controversy swirled over his beliefs and intentions around big social issues, Conservative Leader Andrew Scheer spoke to reporters on Thursday. A Conservative government would not reopen the abortion debate, he said, but as leader, he would allow backbench MPs to “express themselves” on issues of conscience and through private member’s bills on the issue.

As for his views on same-sex marriage—under the microscope after the Liberals dug up a 2005 video of Scheer disavowing the notion in rather dehumanizing terms—Scheer faced repeated questions but stopped short of saying his views had changed. “My personal views are that LGBT Canadians have the same inherent self-worth and dignity as every other Canadian and I will always uphold the law and always ensure that they have equal access to the institution of marriage as it exists under the law,” he said. [Canadian Press]

The opening salvos in the election advertising war have been fired. Along with focusing squarely on voters’ wallets, the Conservatives’ “It’s time for you to get ahead” slogan implies that someone else has been getting a leg up while ordinary people have gotten the shaft—say, someone with the initials S-N-C? And the Liberal “Choose Forward” tagline nods to the fact that voters want to hear what you’ll do for them next, not what you’ve already done, while flicking at the implied threat of a fall backwards into the Stephen Harper era. [Maclean’s]

A new school year has already started for some students and lies in wait for the rest, and in Ontario, after months of furious rhetoric, protests and consultation do-overs, elementary classes will learn a sexual health curriculum that is…remarkably like the old one?

Lauren Bialystok, an associate professor in educational ethics at the University of Toronto, originally writing for The Conversation, pinpoints what she argues the whole sex-ed brouhaha was really about:

This debacle is not only about longstanding culture wars, but, more tellingly, about the place of expertise and professionalism in our democracy. Ford rose to power using populist rhetoric that echoes U.S. President Donald Trump’s anti-establishment tropes. Claiming to be “for the people” and, specifically, on the issue of educational policy “for the parents,” Ford has framed democratic policy-making as an adversarial struggle between “the people” and “the elite.” [Maclean’s]

Meanwhile, new polling from the Angus Reid Institute adds to the evidence that the ethics commissioner’s finding that Prime Minister Justin Trudeau broke conflict of interest rules—which landed like a bomb in the August sleepiness of the Ottawa bubble—was met not with a gasp but a shrug from voters. Nationally, it puts the Conservatives at 36 per cent support and the Liberals at 32 per cent—a high-water mark in Angus Reid surveys this year. However, more than one-third (36 per cent) of those who supported the party in 2015 say they’ll park their vote elsewhere in October. [Angus Reid Institute]

Two Montreal companies, Group AXOR Inc. and Axor Experts-Conseils Inc., have admitted to making $115,000 worth of illegal donations to the federal Liberal and Conservative parties between 2004 and 2009. For the sins they have admitted to the commissioner of Elections Canada, the firms will have to pay $248,712 and $199,163, respectively—the equivalent of three times their offside donations, plus some of the cost of investigating them. [CBC]

The latest report from the Public Policy Forum’s Digital Democracy Project finds that the environment is a top concern for Canadian voters—but they remain unwilling to put their wallets behind that. The report’s authors point out that saying something matters while blithely avoiding any personal sacrifice to improve it is just human nature. But they also posit that it could be the highly visible, quantifiable—and election-torqueable—nature of a carbon tax makes it especially likely here. [Toronto Star]

And finally, newly released Access to Information documents show the Liberal government denied funding to about two dozen organizations for student summer jobs this year, after tweaking the rules that caused enormous controversy in 2018. Last year, organizations that applied for Canada Summer Jobs grants had to attest that their core mandate did not infringe on human rights, including access to abortion, regardless of the job being filled. This  year, that was adjusted to ask if the organizations actively worked to infringe on those rights, and the approval process appeared more targeted. [Canadian Press]