Can the new Tory leader replicate Stephen Harper’s feat and grow the party without alienating its base? 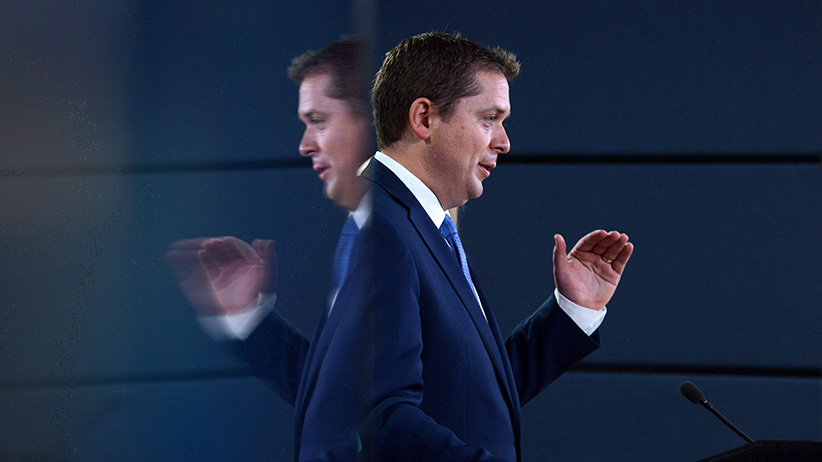 Canadians don’t know quite what to make of Andrew Scheer just yet. The recently installed leader of the official Opposition and the Conservative party has spent more than a decade on Parliament Hill. But a December poll by the Angus Reid Institute indicated a near-identical approval and disapproval rating, and 29 per cent of respondents did not tender an opinion. “He is undefined to a lot of Canadians,” says Shachi Kurl, the institute’s executive director, noting that’s not unusual for a new leader who hasn’t been through an election.

Scheer’s leadership campaign positioned him as “Stephen Harper with a smile.” But a more positive expression alone will not help the Conservatives replicate their successes under the former prime minister. Like many right-leaning opposition parties across the country, the Tories must retain their base and appeal to potential voters who might be put off by the social conservatism and certain economic priorities of some of the party’s core supporters.

It is accepted wisdom that Harper managed to keep the Conservatives in power for almost a decade by keeping the focus on the pocketbook, not the prayer book. That discipline came partly from the experience of the 2004 election, says former party staffer Jason Lietaer, who ran the party’s war room in 2011. Facing a “beatable prime minister” in Paul Martin, Harper ran “a good campaign, [but] was hamstrung by some of the more socially conservative caucus members speaking out at inopportune times,” Lietaer says. In one such incident, MP Cheryl Gallant likened abortion to the beheading of hostages in the Iraq War. The Conservatives lost that election, but won two years later after Harper promised not to reopen the abortion debate.

The 2008 financial crisis ensured that the economy, not social issues, would dominate the Harper government’s priorities and policy-making. “The public would very quickly [have lost] interest in allowing us to govern the country if we had so clearly lost focus on what really mattered to the vast majority of Canadians,” says former cabinet minister James Moore.

Social issues were not entirely absent from the House of Commons during the Harper era. During the 2006 election, he promised to hold a free vote on reopening the debate on same-sex marriage, which had recently been legalized; that motion was defeated, and he declared the matter settled. And Conservative MPs Rod Bruinooge and Stephen Woodworth did champion abortion-related private member’s bills during the party’s time in government, but neither passed, and the prime minister himself voted against both. “If you did this kind of thing, you were on the outs with the rest of the caucus and the cabinet,” says Lietaer.

Scheer voted for Bruinooge’s bill and the same-sex marriage motion, but has promised, like Harper, not to reopen either debate as leader. Social conservatives may not accept that position indefinitely—Brad Trost, who finished fourth in the Tory leadership race, told the Hill Times that Scheer would be “wise” to pay attention to the concerns of those party members. The new Conservative leader “doesn’t shy away from his beliefs,” says Lietaer. But nor does he “intend to force them on anybody.”

That position appears judicious. In a poll conducted by Angus Reid in the immediate aftermath of the leadership race, more than two-thirds of core Conservatives—those who have voted for the party previously, and say they will do so again—agreed in prioritizing choice in matters of abortion and doctor-assisted death.

But while most party supporters are not spoiling to reopen the culture wars, those conflicts remain top of mind. The base and likely voters also disagree on some key economic issues—lower taxes are a winner all around, but growth versus environmental protection remains contentious.

To keep those core supporters in the tent while bringing enough swing voters to form government, Scheer will have to perform a high-wire act. The exclusion of Trost and Kellie Leitch from Scheer’s “shadow cabinet” was read as a move to keep controversies over social issues off the front benches and pages. Leitch’s proposal to subject immigrants to a “Canadian values” test was one of the focal points of the race, but she finished a distant sixth and recently announced she will not seek re-election. Still, Scheer will need to navigate questions of immigration with care. The narrative of the 2015 election attributed the Conservative loss in part to a turn toward coded proposals and messaging, which included the Leitch-fronted “barbaric cultural practices” tip line and Harper’s leaders’ debate reference to “old-stock Canadians.” The Angus Reid polling suggests reducing immigration remains popular among the base as well as potential voters.

Other cultural issues could also trouble Scheer. Consider the case of Sen. Lynn Beyak, who was only removed from the Conservative caucus in January, months after comments defending residential schools sparked calls for her resignation. “Racism will not be tolerated” in the party or its parliamentary cohort, Scheer said in a statement. Beyak had lost her committee appointments after her original comments in April last year, while in September—after Scheer became leader—she called on Indigenous people to “trade your status card for a Canadian citizenship.”

Reacting to his mother’s removal from the Conservative caucus, Nick Beyak, a city councillor in Dryden, Ont., claimed that “the majority of Canadians agree with” the senator’s comments. The June Angus Reid report suggests there is a constituency for those views. Indigenous issues produced the largest split among those identified as core Conservatives, with 68 per cent saying the country should “work to remove any special status and programs,” while likely and maybe voters were more inclined to call for the expansion of policies to improve their situation.

RELATED: Andrew Scheer of the suburbs vs Justin Trudeau and his throngs

Lietaer says there’s broad consensus among politicians of different affiliations about the need to do things like ensure clean water on reserves, improve education outcomes and protect young Indigenous women. “On this particular issue, I don’t think [Scheer] or any Conservative leader that I’ve been around has been guided by polling,” he says.

Still, the delay from Beyak’s first incident to her caucus ouster was notable. After the latest incident, Scheer told Global BC that “over the course of several months, it became clear” that she wasn’t on board with his vision of “dealing with Indigenous Canadians in a respectful way.”

Scheer has claimed that the Liberals are shifting leftward, leaving new ground for his party. But shuffling too far to the progressive side to attract such voters could risk a schism such as the one that gave rise to the Reform Party in 1987. There are pitfalls on the other side as well. In Alberta, former Harper cabinet minister Jason Kenney has succeeded in combining the two entities on the right. The resulting United Conservative Party promises to repeal the province’s carbon tax and restrain spending. But some operatives and one current MLA from the former Progressive Conservatives have defected to the thus-far marginal Alberta Party rather than back Kenney, who has claimed the ruling NDP is attempting “social engineering” in schools and in turn been accused of harbouring a “divisive agenda” by Premier Rachel Notley.

Moore notes that the number of “rabidly partisan” voters among the electorate is low. Any entity that aspires to govern Canada needs to tackle the concerns of the public with solutions that have broad public acceptance while still reflecting the party’s values—to a point. Parties that “get wrapped up in singular-issue obsessions and ideological purity … like the NDP and the Green Party” have an “unbroken track record of failure in national politics” when it comes to winning elections, he says.

READ MORE: An insider’s view of the final week of Andrew Scheer’s campaign

There are issues on which the base can be placated without alienating swing voters. Moore cites maternal and newborn health, which the Harper government funded alongside the Gates Foundation, as a policy issue that would appear socially conservative but crossed ideological boundaries. It was likely not lost on pro-life voters that the initiative did not include abortion.

Scheer may already have found such a subject. The loudest cheer during his leadership victory speech came at the mention of his proposal on campus free speech. Scheer suggested that universities’ protection of the right to expression should be factored into the allocation of federal grants. “There is a constituency for this, and I think people are getting more and more angry about it,” says Lietaer, pointing to the reaction to the recent incident at Wilfrid Laurier University, in which a teaching assistant was reprimanded for showing her tutorial a video of Jordan Peterson, a professor and alt-right hero. Scheer laid down a marker of his position early and clearly, says Lietaer, though he does not expect it to be a major issue in the campaign to come.

Last week, Scheer tabled a private members’ bill that would provide a tax break for first-time parents, and finance critic Pierre Poilievre put forward one to reduce benefits clawbacks from people with disabilities. The Conservatives have yet to propose much by way of policy, but these early signs suggest a continued focus on voters’ wallets.

And there’s still plenty of time before the next election for Scheer to define himself for Canadians. “He’s using this time effectively to try to flush out exactly what Canadians are anxious about, and what they’re hopeful for,” says Moore. To unseat a first-term majority government that remains popular with voters, Scheer will need to speak to those worries and aspirations. That means focusing on the economy—the culture wars can wait.