Another swine mess we've gotten into with China 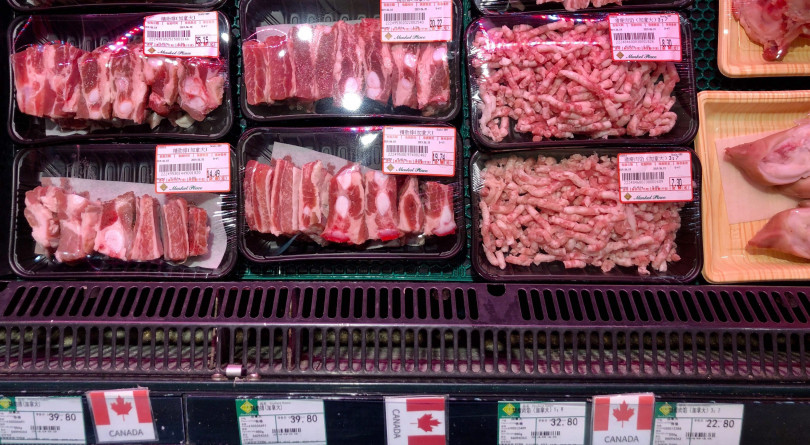 Packs of Canadian pork are displayed for sale at a supermarket in Beijing, Tuesday, June 18, 2019. (Andy Wong/AP)

Friends of Ford’s friends keep turning up in the darnedest places. Relatives and acquaintances of Ontario Premier’s Doug Ford‘s recently-departed chief of staff, Dean French, are sprinkled throughout the provincial government, extending a nepotism scandal that’s stained the Ford government. A friend of French’s son got an Ontario government gig in New York City, while a cousin of French’s wife scored a posting in London, U.K., with both jobs paying $150,000. (Both appointments have now been rescinded.) Meanwhile French’s niece Katherine Pal resigned Tuesday from the Public Accounts Council. The Premier, who only days earlier at the annual Ford Fest rally griped about “downtown insiders,” has ordered a “review of all pending appointments” to find out how many are Doug Ford insiders. (Toronto Star)

Aside from the obvious media scandal, none of this is sitting well with those within the Ontario PC Party, who are apparently miffed that appointments were going to the wrong class of insiders. “Of course, who you know in politics is what matters. That’s how we all got here at the end of the day,” a PC Party source told Global News. “But we still had to pay our dues and jump through the hoops. When you see others getting a job just because they happen to play a sport, it hurts morale and is bad for the team.” (Global News)

Hog wild: China’s domestic swine industry may be rife with diseased pigs, forcing it to ramp up imports to record levels, but that hasn’t stopped Beijing from threatening to suspend all Canadian meat exports. The Chinese embassy said inspectors found residue from a feed additive that’s restricted in China, while Canadian officials confirmed to CBC that the Canadian Food Inspection Agency had told Chinese officials it uncovered counterfeit veterinary health certificates on some meat exports to China. Citing “obvious safety loopholes” in Canada’s food inspection system the embassy said all meat export certificates from Canada must be suspended. (CBC News)

The meat ban follows other moves by China to punish Canada for detaining Chinese telecom exec Meng Wanzhou on a U.S. arrest warrant—China has banned Canadian canola, some pork exports, arrested two Canadians and sentenced two others to death for drug crimes.

Pick a side: A letter dispatched by Meng’s lawyers to Canada’s justice minister earlier this week amounted to a “three-page hodgepodge of distortion, truth-twisting and manipulative appeals to Canadian vanity,” writes Terry Glavin, but that wasn’t the worst of it. The most troubling part is the way former prime minister Jean Chretien, who is cited in the letter for supporting Meng’s position, continues to provide cover for China’s political attacks on Canada:

There is a distinct smell of desperation about Monday’s caper. While the lawyers declined to release the submission they say they’ve put to Lametti, the legal pleadings in their elaborate “press release” have been public knowledge since Meng’s first court appearance last December. The thing that’s really new in the lawyers’ pitch is the reference to Chrétien’s endorsement of their political claims, which they would otherwise have absolutely no competence to assert. It’s a sort of conspiracy theory.

The hypothesis, which conveniently serves the purposes of shoring up the reputations of Canada’s China-trade enthusiasts—and you can’t blame them for trying, since they’ve never been right about China, once, over the past 25 years—is that Meng’s arrest is all a setup job in aid of U.S. President Donald Trump’s trade-negotiations agenda. It’s an American “trick,” as Chrétien has reportedly put it. For publicly insisting on the reasonableness of the theory, Chrétien-era cabinet fixture John McCallum, who was Canada’s ambassador to China when Meng was arrested, was quite properly fired. Although twice warned, he was happy to carry on implying that Beijing had a point, that indeed Canada was playing the part of a patsy, after all, to the scheming Trumpists in Washington. (Maclean’s)

Speak of the diplomat: McCallum is back with more of the same advice on the Meng file. If President Trump would just overrule the criminal case against Meng and set her free, all of this unpleasantness between China and Canada would be over, he told the CBC from Beijing, where he was working in his new role as a strategic advisor at a Toronto law firm: “I certainly hope that (Trump) can help. I think from the point of view of restoring relations and releasing our hostages, the best thing that Trump could do would be to say that he is no longer seeking to extradite Meng Wanzhou.” (CBC News)

Others think it’s long past time for McCallum to zip it. As David Mulroney, Canada’s former ambassador to China put it: “My own sense (is) if I had gone through what he has gone through … I would refrain from making public comments. The unfortunate reality is that while senior people make comments like this, it reinforces for the Chinese that the Canadians are going to crack.”

Not my party: Andrew Scheer received a lot of blowback from critics after he released his target-free climate plan earlier this month, but this one hits closer to home. Former prime minister Kim Campbell called the Conservative plan a “sop” and said she has “no time” for climate change deniers in the party. Nor does she have time for the party in general: “I’ve never joined the Conservative Party of Canada. I think Joe Clark expressed it that he didn’t leave the party, the party left him. It is not the Progressive Conservative Party.” (CBC News)

Internal affairs: Just a week after backbench Liberal MP Geng Tan surprised supporters by announcing he would not run for re-election, he faces accusations that he hired his girlfriend as an assistant, then fired her while refusing to pay child support for their daughter. Ying (Stella) Yu, 54, says Tan provided a sperm donation for in-vitro fertilization but then “ignominiously terminated” her in 2016 at the request of Tan’s wife. Tan denies there was any “misuse” of their acquaintance and he’s vowed a “strong legal response … I will strongly fight for my dignity and honour which is improperly being maligned, alleging wrong facts and concealing the real ones. I have strong support and love of my family.” (National Post)

For fork’s sake: Oh, and remember that most Canadian of scandals, plastic forkgate, when Trudeau ordered pizza for a climate plan meeting complete with plastic cutlery? Could the story get even more Canadian? Yes, yes it could. The Prime Minister’s Office responded to the backlash on Tuesday and promised that the plastic cutlery will be reused. (CTV Twitter)

A look at what the polls are saying ahead of the October election:

From poll aggregator 338Canada, Philippe J. Fournier looks at how Scheer‘s path to victory could run through Quebec:

First, there was the Angus Reid Institute poll which suggested that the Conservatives had risen to an unexpected first-place statistical tie with the Liberals in Quebec (28 per cent for the CPC and 26 per cent for the Liberals), something no other pollster had yet to measure.

This had ‘outlier’ written all over it. But then the following week, Léger—which doesn’t have a history of overestimating the CPC—also measured the Conservatives in first place in Quebec with as much as 30 per cent support among decided and leaning voters. (Maclean’s)