Anthony Rota: The early-pandemic frenzy was 'one long day with naps every once in a while' 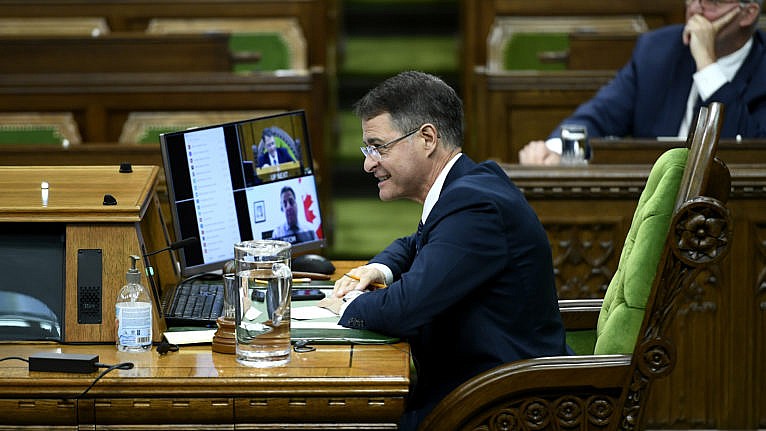 Anthony Rota was elected Speaker of the House of Commons in the before times. The Winnipeg Blue Bombers had just won the Grey Cup for the first time since 1990. Andrew Scheer, fresh off an election loss, would soon signal his intention to step down as Conservative leader. Rota, the MP for Nipissing-Timiskaming, Ont., who thwarted fellow Liberal MP Geoff Regan’s bid for a second term as Speaker, had no idea that a novel coronavirus was emerging far away from Canada—and that a global pandemic would throw challenges at him that no previous Speaker had ever faced.

Pablo Rodriguez, the Government House Leader, was flanked by opposition colleagues when he announced a suspension of the House sitting on March 13. That set off months of horse-trading on legislation that required emergency sittings, a special committee that included every single MP and a hybrid format that allowed anyone to participate virtually from every corner of the country. It was Rota’s job to make it all work. He spoke to Maclean’s just after the one-year anniversary of his election, on the eve of a planned surgical procedure (which was ultimately a success).

This interview has been edited for clarity and length.

Q: Where am I catching you right now?

Q: That’s your hometown. How did your family end up there?

A: My grandfather first came here in 1903 to work on the railway. My father was born in 1915 in North Bay. They actually had a bakery here that my uncle started in 1924. It was a family bakery. He sold it in 1971. It was the largest bakery in northern Ontario until it got bought out a number of times, and it was after a large Mexican company bought it that they stopped making bread in North Bay.

The business has changed quite a bit. Day-old bread, when I was a child, was something you sold at a discount. Now, I don’t know how old it is by the time it gets to your kitchen table. But it’s got a different composition.

My dad went over to Italy for a trip and met my mother. He went back again and ended up getting married in Italy. She came over in 1960. They met in Cosenza, which is a city in southern Italy.

One year later, I was born. We lived next door to the bakery, so it was kind of a playground for me. We’d build forts with the bags of flour.

Q: You’ve had a long-time interest in technology, which came in handy during virtual sittings in Parliament. How did you get drawn to that?

A: It started when I was younger. Even throughout high school, I used to play around with different projects—making strobe lights or sirens, all with transistors and resistors and whatever other parts were needed. Back then, we’d take a board, hammer copper nails into it and solder the circuit together so it would come out exactly the way we wanted.

I’ve had computers since the early 80s, playing around with minor programming and seeing how the technology can work for us. I’ve always enjoyed working with them. Spreadsheets are one of my passions. With my brother-in-law, we put together the Apple IIC, which came in a kit at the time. You bought the motherboard and all the chips and soldered them all in, and it worked. I’ve always been on—maybe not the leading edge, but maximize technology to make work easier and a little less repetitive.

Q: You must be the only Speaker in Commons history to assemble your own computer.

Q: What do you love about spreadsheets, of all things?

A: I just like to see the visual. I put all the data in, get the calculations right and be able to change them and see my results. If I’m working on a trend, I can put that on a graph. And if you’ve got different tabs on the bottom where you have different sheets, you can tie them all together and do different calculations that will still feed into the principal one.

I’ve got a project manager background. I always look at life as a Gantt chart [which tracks project schedules on a spreadsheet]. Whenever I look at a project, it’s like, okay, what goes where and how do we make it more efficient? That just seems to be my nature.

Q: How did you feel in the early days of the pandemic, when the House wasn’t able to sit regularly and the solution wasn’t obvious?

A: It was just a challenge and we had to deal with it. That’s where I worked with the House administration to make sure that whatever support was necessary for the members would be there. Some of the principles that I embodied, and something I honestly believe has to be respected, are the privileges of the members of Parliament. They get to participate on a daily basis in what’s going on in the House. We had to figure out how they could do that within the rules that existed and what rules would have to come into place.

We needed simultaneous translation. That was one of the biggest challenges, finding a program that could accommodate that. That’s where Zoom came in when we were trying to decide on a platform. They had the easiest one to switch between two languages.

The information technology team has been investing in infrastructure and technology over the years. Now we had a chance to actually take advantage of it to its fullest, and I think we all saw it as an interesting challenge.

Q: That must have been a stressful time for the people who were tasked with creating a virtual Parliament that worked for everyone.

A: They were working day and night. They were amazing. One of the administrators working closely with IT said for the first few months, they didn’t see that time as months, but one long day with naps every once in a while. That describes it quite accurately.

Q: How often did you seek advice from other speakers around the world?

A: That’s something we did fairly regularly. Our administrations connected with each other, and I connected with a number of different speakers, from England to Washington, to Italy, France, New Zealand, just to see what they were doing. We exchanged ideas. The nice thing about it is it’s a lot less painful to learn from somebody else’s mistake. We shared our mistakes. We shared our successes.

The National Assembly in Wales required translation, because they have Welsh and English. We learned how they were doing it. We talked to the Brazilian parliament on how they were doing things because they have geographic challenges, as well, not only on size but on getting around. I also spoke to many of the Speakers across the country. Even to this day, every once in a while I’ll get a text from one of them asking, “How did you handle this?”

Q: Was the pace of decision-making overwhelming in those early days?

A: You were on the treadmill, and if you didn’t keep up, you were thrown off. You just didn’t think, you kept going. There was no time for making excuses. It was just a matter of making decisions, seeing how things worked and then getting them implemented depending on what the House decided.

Q: The Speaker traditionally names an official scotch. Have you had time to think about that?

A: It’s one of the questions I’m most often asked about. Normally, the members come in and we make an evening of it. They drop in and taste the different scotches, and vote on which one they want. When COVID started, I thought, well, we’ll wait. We put it off and put it off. Finally, people said they usually give them away as gifts at Christmas, so I made a major sacrifice. I had to taste them myself.

I did choose a scotch, and it was just available on Monday, Dec. 7. It’s Aberlour, and it’s called A’bunadh.

Q: Did you feel a lot of pressure to get it right?

A: You really do get self-conscious about it. Based on the feedback, the choice was good.

Q: Where did you taste the scotches?

Q: What’s something most people don’t know about your job?

A: One thing that is probably less familiar to most people is the diplomatic end of things. Normally, what happens if there’s a visiting dignitary, they’ll meet with the prime minister—but they’ll also meet with the Speaker. You also travel around the world representing Canada as the Speaker.

There wasn’t much of that this year. I basically visited many parts of the world virtually through Zoom or Skype, from Japan to England to South America. I speak four languages, and it really helps when you can speak without an interpreter. The Speaker of the European Union assembly is from Florence, so we met and hit it off right away. One of my only trips was down to Mexico, and it’s so much easier when you can just speak the language.