Are the Conservatives about to elect their own Stéphane Dion?

Stéphane Dion led the Liberals into almost a decade of darkness. The Tories may want to take heed, ahead of what may be Maxime Bernier's coronation 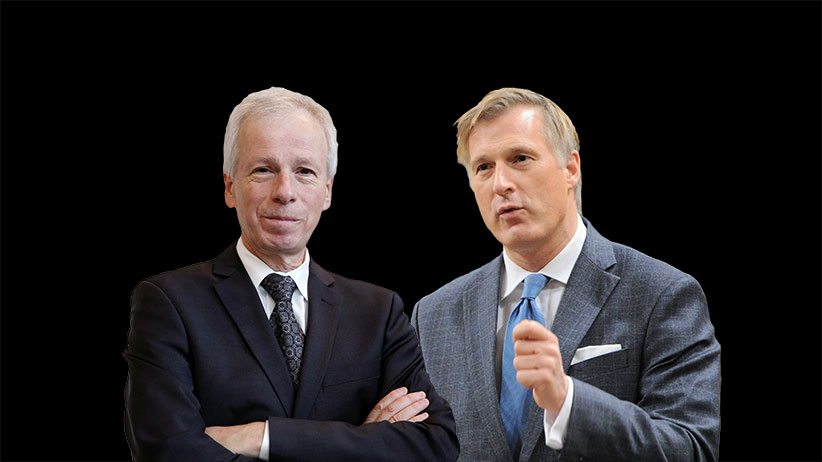 The Conservative Party is about to pull a Dion.

In selecting Maxime Bernier as their next leader this weekend at the party’s leadership convention—an outcome that the pitiful withdrawal of carpetbagger Kevin O’Leary has made all but inevitable—the Conservatives risk repeating history. It just won’t be their own.

In 2006, the federal Liberals gathered in Montreal to select a new leader. Like today’s Conservatives, the party was down but not out. They too enjoyed a 100 person-strong caucus and hoped that a new leader might soon guide them back to power.

Then a sort of mass hypnosis gripped party members and they chose Stéphane Dion. For Liberals, it began a nine-year journey through dark and forbidding woods. And this weekend, Conservatives seem set to launch themselves down the same breadcrumb trail.

In fairness, it is unkind to compare Dion and Bernier—unkind to Dion, that is. Bernier lacks anything nearing the record of public service that Dion brought to his leadership run. In 2006, he was the iron-willed former minister for national unity who had helped quell separatism after the 1995 referendum. Bernier thinks, but can’t remember for sure, that he voted to break up Canada. Later, as environment minister, Dion made a bold impression both at home and abroad. Bernier, on the other hand, was dropped as Stephen Harper’s foreign affairs minister after leaving secret government documents tucked between the sheets of a Montreal-area love shack.

OUR PROFILE: How Bernier went from comic relief to Tory frontrunner

First, their success says more about the peculiar, intramural psychology that can seize political parties downsized by electoral defeat than it does about their own candidacies. Dion slipped through the dime-sized space between frontrunners Bob Rae and Michael Ignatieff to surprise even his followers by winning. Bernier, always the first choice of the Ayn Rand crowd, has emerged as the least unacceptable second or third choice for remaining Conservative party members.

In both cases, the particulars of the leadership selection process disproportionately reward candidates for being who they are not. As a method of picking a leader, it’s a good way to reach compromise. It is perhaps less effective at producing winners.

Most interesting is the way in which party members, caught up in the bubble universe of a leadership race, can convince themselves that their choice is outstanding. Dion’s shortcomings were not invisible. And only the quantum-physics complexity of a 14-candidate preferential ballot could make it plausible to overlook Bernier’s obvious deficiencies.

MORE: As it’s laid out now, Bernier’s health-care plan could be electoral poison

Chief among these are his ideas and, even more concerning from an electoral standpoint, his ideological attachment to them. Bernier’s opinions are marked by an inelastic obstinacy that, while very different in substance, reflect Dion’s own indifference toward pragmatic politics. Bernier is a self-professed Libertarian who seeks to lead a country that has always demanded middle-of-the road practicality. Talk of free market anti-statism will be celebrated among Friedrich Hayek disciples. The rest of the country will wonder what the hell he’s on about.

The most obvious comparison between Bernier and Dion, however, is the somewhat delicate subject of their language skills. Observers are wary of raising this impolitic subject. But that doesn’t make it unimportant. Like Dion, Bernier’s English is heavily accented and sometimes halting. With the ready memory of Jean Chrétien, questions about Dion’s language proficiency were dismissed at the time. In retrospect, it would be dishonest to conclude that it was a non-factor.

Conservatives, after all, cheered in 2008 as unflattering outtakes appeared of Dion struggling through an interview with CTV’s Steve Murphy. Wouldn’t it be delicious irony for Dion if a Bernier-led Conservative Party discovered a decade later that what goes around comes around.

The final question is how good Bernier will be at uniting his party, a chore that somewhat eluded Dion. Unable to attract headliners like Peter MacKay, Jason Kenney or John Baird, the contest to replace Stephen Harper has been a hidden-in-plain-sight calamity for self-respecting Conservatives.

In particular, O’Leary’s farcical, part-time campaign was a revelation. Fuelled by Trump-like bombast and a pronounced lack of commitment, O’Leary campaigned lazily from U.S.-based television studios and still emerged as the likely first-ballot leader. What to make of a party so eager to turn itself over to the Fuller Brush man?

Kellie Leitch’s success might be even more disturbing. Riding a nativist collection of Marine Le Pen policies, she has scraped out a discouragingly competitive campaign. One wonders what might have been if she was even slightly less ridiculous as a candidate—or what influence her followers might now claim over party policy.

Throw in a muscular group of pro-life social Conservatives, Maclean’s columnist Scott Gilmore’s breakaway movement and the lamentable retirement of Rona Ambrose, and Bernier will have his hands full long before he gets to Justin Trudeau.

None of that means the Conservatives can’t win in 2019. But, like the Liberals of 2006, they’re going out of their way to make it as hard as possible.

Scott Reid is principal at Feschuk.Reid and served as director of communications to former prime minister Paul Martin.