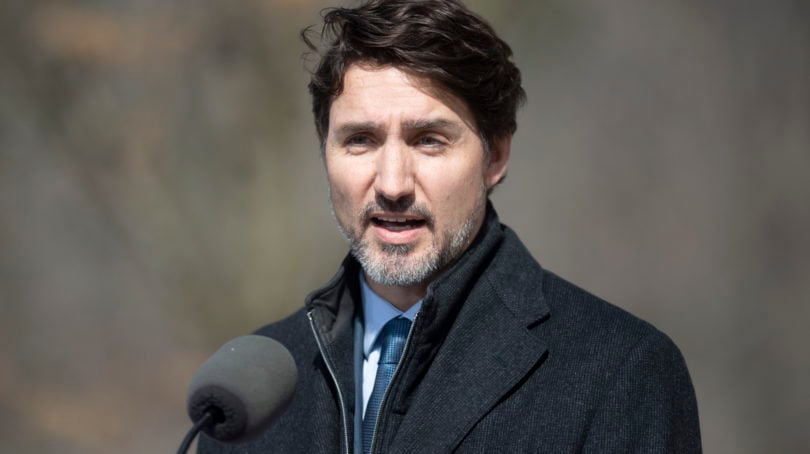 This time last year, Canadians were waking up to pay homage to the Irish spirit of whimsy embodied by St. Patrick’s Day. This year, Canada is officially closed to Irish visitors—and anyone else in the world, outside the U.S., who doesn’t already live in Canada. Prime Minister Justin Trudeau announced the stunning new border measures outside Rideau Cottage in Ottawa, where his fortnight of self-isolation continues.

The PM made a few exceptions for diplomats, flight crew and immediate family members of Canadian citizens. And he said only four airports across the land—in Vancouver, Calgary, Toronto and Montreal—will accept most international arrivals. The only non-domestic flights that can land elsewhere are inbound from the U.S., the Caribbean or the tiny French overseas territory of St. Pierre et Miquelon, just off Newfoundland’s coast.

Liberal MP Mark Gerretsen is now dealing with the coronavirus on a personal level: his mother, who’d recently taken up temporary residence at CFB Trenton along with fellow Canadian cruise ship evacuees, tested positive for the disease. “Other than a cough,” he tweeted, “she has no other symptoms.”

Canada’s chief medical officer of health, Theresa Tam, had simple advice for Canadians who are getting used to the idea of social distancing: “Act like you are quietly carrying the virus and do everything you can to stop spreading it to others.” She described the window to “flatten the curve” of the COVID-19 epidemic in the same terms as last week: “narrow.” Watch Canada’s progress on flattening the curve with this chart we’re updating daily.

Shutting down day-to-day life, with all its habit and routine, is a difficult ask of anyone. But when public-health officials impose their will on citizens—not by forcing, but by forcefully asking—they enter a messy business. Yesterday, when Ontario Premier Doug Ford announced a suite of measures to ratchet up social distancing to save vulnerable peoples’ lives and protect vulnerable workers’ incomes, he stopped short of calling for the closure of bars and restaurants in the province. But only hours later, Ontario’s medical health officer, David Williams, did ask those businesses to close as soon as possible.

Early yesterday, Toronto mayor John Tory—who also remains isolated—batted away rumours, run rampant over the weekend, that he would order shops to shut their doors. Later in the day, the city’s top doctor, Eileen de Villa, followed in Williams’ footsteps—not an edict, not yet, but certainly an urgent plea to local bars and restaurants that they close on what would otherwise be the biggest party day of the year.

(UPDATE: At 8:30 a.m. on March 17, Ontario Premier Doug Ford declared a state of emergency in Ontario, effective immediately. The measure requires the closure of all indoor recreation programs, libraries, child care centres, bars and restaurants (except those that can facilitate take out and delivery), and cinemas or venues with live music or theatre. Ford also banned all gatherings of more than 50 people.)

Andrew MacDougall, the former Harper comms chief who’s unimpressed with much of Team Trudeau’s messaging on the COVID-19 response, had stern words for anyone who takes a mic during this crisis:

A reminder to all government communicators: the Canadian people aren’t expecting perfection. But they are expecting bloody quick action on imperfections. And that action extends to clear, consistent and constant communication about everything that’s going on, even if it’s unbearably grim, for either the country or the party that’s in charge of government.

Staying on track: The Conservative party’s leadership election organization committee released a statement that acknowledged the unavoidable impact of the coronavirus crisis on the leadership race. But no timelines will change. One of the candidates, Tory MP Marilyn Gladu, told the Hill Times the committee’s statement was “tone deaf.”

Maybe Norway has it all figured out. Prime Minister Erna Solberg spent a half-hour answering questions on the coronavirus submitted by children.