As factories retool to fight the coronavirus, doctors feel 'betrayed' by PPE shortages

Politics Insider for April 8: Trudeau says thousands of companies have answered a call to innovate and the feds have placed huge orders for equipment, but the front lines say they're running short on supplies 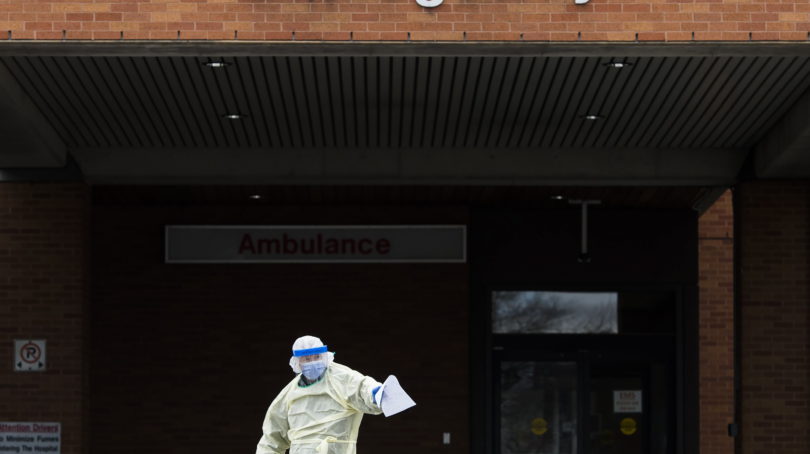 Prime Minister Justin Trudeau yesterday saluted Canadian industry from his lecturn outside Rideau Cottage. Trudeau said nearly 5,000 companies had signed up to help fight COVID-19. They’re re-tooling to build products they’d never have imagined even a couple of months ago. Autoliv, for example, is “looking to make medical gowns out of material that are normally used to produce air bags.”

The PM also shouted out Dr. Art McDonald—a Canadian Nobel laureate who once “studied neutrinos created in nuclear reactions in the sun”—for working with fellow scientists to devise easy-to-build ventilators.

Trudeau said the government shared a new wage-subsidy bill with opposition parties. That sort of outreach is verboten in normal times, but this is the second bill to be quietly negotiated behind closed doors since the regular schedule of the Commons adjourned in mid-March. After Trudeau spoke, Bloc Québécois leader Yves-Francois Blanchet appeared to reveal that the House could debate the new bill tomorrow. (iPolitics reported that debate could stretch over Easter weekend.)

Blanchet had demands, including support for businesses that are struggling with fixed costs. The NDP’s Jagmeet Singh is urging the feds to send $2,000 cheques to every Canadian. The Greens have called for similar direct relief. The Globe and Mail reported on a leaked draft of the bill that expands eligibility for businesses that have seen revenue fall away.

(During his presser, the PM also said the word “moistly” out loud. He quickly recognized the weirdness of the phrasing, and the moment of levity soared in all the places you’d expect.)

Stay home: At the daily federal presser on the coronavirus, Health Minister Patty Hajdu reminded the country that warm weather is on the way, as are a spate of religious holidays that traditionally bring people together. But the minister’s instructions didn’t mince words: “Don’t invite others to your house even if they are members of your own family.”

Anita Anand, the federal procurement minister, gave a snapshot of just how much personal protective equipment is on the way to Canada. She said Canada will have 2.3 million masks in its possession by the end of the week. And the feds have “roughly 75 million N95 masks on order.” Anand also said the government has ordered over 113,000 litres of hand sanitizer—and has received 20,000 litres in the past 24 hours alone.

After Ottawa hired Amazon to distribute critical medical equipment across Canada, the Canadian Union of Postal Workers fired off a release saying they’ll be “fighting for all workers in this arrangement’s supply chain”—which includes, of course, the nation’s unionized mail carriers. The union took a dig at the global e-commerce giant, saying its un-unionized employees have a right to “a collective voice to improve your work conditions.”

A stern warning: Doctors’ and nurses’ groups told the Commons health committee yesterday that health-care professionals across Canada are alarmed by shortages of desperately needed personal protective equipment. The president of the Canadian Medical Association, Sandy Buchman, spoke for doctors. “They are scared. They are anxious,” he said. “They feel betrayed. They don’t know what supplies are available.”

The Globe reports that Natural Resources Minister Seamus O’Regan will try to use a meeting of G20 energy ministers to hash out a solution to that other global crisis—the oil price crash spurred by a feud between Saudi Arabia and Russia. Both countries have refused to curb production as global demand plummets, which is why you’re filling up at prices you haven’t seen for decades. Fatih Birol, the executive director of the International Energy Agency, tweeted that the G20 “could play a leading role in boosting market stability.”

Meanwhile, Alberta will join a Thursday call held by the Organization of the Petroleum Exporting Countries—and steep production cuts in the province are on the table as most major players search for a deal that could stabilize prices.

When the Canada Emergency Response Benefit portal launched on Monday, 788,000 Canadians successfully applied for the benefit (an impressive rate of about 1,000 a minute). Canada.ca racked up more than 12 million visits yesterday, a number so large it appeared to break a graph charting the site’s daily traffic. The feds continues to stagger CERB applications throughout the week according to applicants’ birth months. If you were born in July, August or September, today is your turn to apply for the CERB. (Anyone can apply on Fridays, Saturdays and Sundays.)