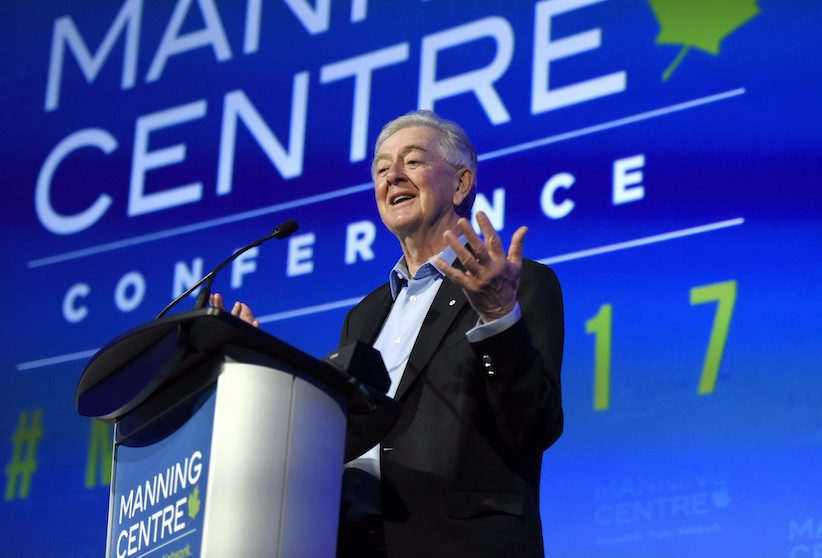 Preston Manning speaks at the opening of the Manning Centre conference, on Friday, Feb. 24, 2017 in Ottawa. THE CANADIAN PRESS/Justin Tang

Kady O’Malley is joining Maclean’s to cover the Manning Conference, hosted by Canada’s leading think tank for the right. She’ll be filing frequently over the course of the two-day conference—keep track at her Manning Manifests page, here. Watch the broadcast live all weekend, including the Conservative leadership debate, here.

Well, we haven’t quite hit the halfway point for Day One, but there’s been enough action to churn out a recap of the event so far, starting with the traditional opening rah-rah speech by the one and only Preston Manning himself.

After giving his standard glass-half-full thoughts on the rise of populism—a phenomenon on which he seems determined to keep an open mind—he assured the half-dozen or so reporters in attendance that he doesn’t think there’s any danger at all in having issues like immigration come up during a leadership race. It’s up to the individual candidates to decide how to handle it, he said during a post-speech scrum.

(He was not, however, willing to share his assessment of how the various candidates were doing so.)

And when asked about the furor surrounding Bill M-103, and the fact that four of those candidates appeared on stage at the so-called “Freedom Rally” hosted by a right-wing activist website in Toronto, he hemmed and hawed in clear mild to middling discomfort before suggesting that it’s not a question of what candidates say at a rally but what the rally-goers go on to do.

MORE: Evan Solomon on how Bill M-103 shows all parties racing to the political bottom

He was also adamant in rejecting any suggestion that the programme of the Manning conference itself may play into that with its focus on Islamic extremism, despite the fact that it is devoting a full three hours—double the length of a standard session—to a panel on the subject.

Meanwhile, Conservative leader Rona Ambrose also took the stage to give the sort of safe, comfortable feel-good speech that one can only deliver to a universally friendly audience predisposed to applaud approvingly.

She also made every effort to be entirely impartial in discussing the race itself, although her suggestion just now that the best leader isn’t always the one who “talks the loudest” could be interpreted as a possible critique of one particularly bombastic hopeful.

And hey, she got a standing ovation, which is probably more than payment enough for making her second—and, barring some sort of seriously unexpected turn of events, final—appearance in her current role before ascending to the status of esteemed party stateswoman.

After she wrapped up by promising that her caucus would continue to “champion” various causes close to the Conservative movement’s collective heart, the attendees were released to fill out the crowd on the panel circuit.

More on that, though, in a later post. Stay tuned!