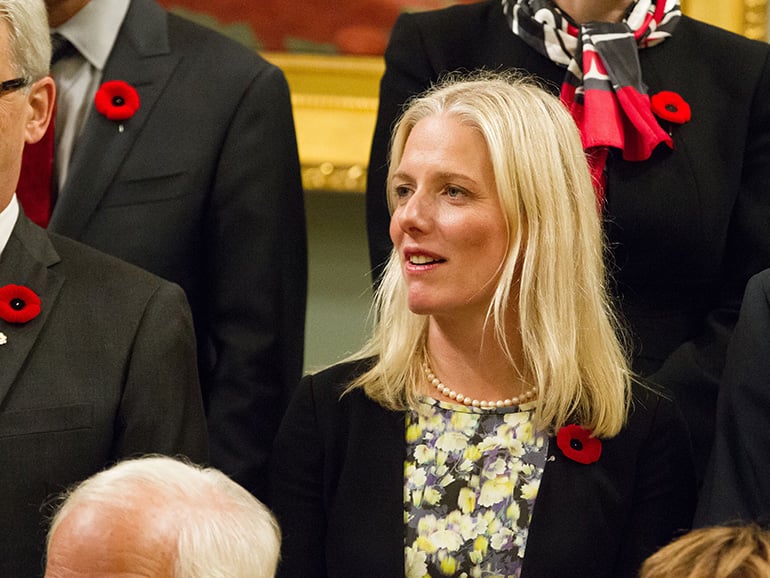 Another day in Paris, another move by the Liberal government to distance itself from the Conservatives’ climate-change skepticism. On Sunday, Environment Minister Catherine McKenna aligned Canada more closely with the world’s poorest countries when she voiced support for the world trying to hold global warming to 1.5 degrees Celsius rather than the two-degree limit widely discussed in rich countries ahead of the summit.

But exactly what “voicing support” is unclear. McKenna told the other environment ministers that Canada supports including a “reference in the Paris Agreement to the recognition of the ‎need to [strive] to limit global warming to 1.5 [degrees Celsius over preindustrial levels].” That stops short of asserting the limit should be 1.5 degrees, but it’s a nod toward a tougher target than the two-degree goal supported by the U.S. It’s also the target the developing countries are pushing, particularly the small island states, who are at risk of the most disastrous impacts of climate change.

Still, that leaves quite a bit of wiggle room: Canada is not asking that the 1.5-degree target be binding or even firm. It simply calls for language in the Paris agreement to urge countries to do their best. However, the pledges presented by each country add up to anywhere from 2.7 to 3.7 degrees of warming.

Nearly 200 countries are in Paris for two weeks of talks to try to lower greenhouse gas emissions and prevent catastrophic climate change. But the divide between rich and poor countries—as well as those emerging economies that fall in between—is proving hard to bridge. And the most basic gap is the debate over precisely which target should go into the text.

That’s despite evidence that the two-degree limit won’t do enough to prevent the worst effects of a hotter climate. Last week, scientists from the Intergovernmental Panel on Climate Change said two degrees of warming could still lead to long-term consequences to some particularly sensitive parts of the world, including Arctic ice sheets.

“The two-degree target is a political choice and was never prescribed by scientists,” Valérie Masson-Delmotte, co-chair of one of the IPCC working groups, said Thursday. “The last [IPCC] report clearly shows that the … warming will generate, depending on its magnitude, the risk of severe or sometimes even irreversible impacts and sometimes also [those] beyond adaptation capabilities.”

At the same time, the IPCC says there’s been little study of what happens at 1.5 degrees of warming, the limit Canada has now endorsed. Still, the Liberal government’s shift to the tougher target follows its pattern of trying to distance itself from the Conservative government, which was defeated Oct. 19. Broadly, that’s meant focusing on science and repeating that pledge loudly, and more specifically by promising money for Canadian environmental initiatives and for developing countries that need to adapt to climate change.

Prime Minister Justin Trudeau tried to set the tone before the climate conference even started when he pledged $2.65 billion for developing countries to adapt to climate change, of which $150 million has been committed to renewable energy in Africa and $50 million to climate-risk insurance for poor nations. Both he and McKenna emphasized their ambitions for the talks, but the Canadian contingent arrived with the same targets as under the Conservatives.

So far, it’s working. McKenna has been well-received at the Paris conference, also known as COP21, and at the pre-COP21 meetings. On Sunday, she was named a negotiation facilitator by the French foreign minister. That means McKenna will lead informal discussions to try to make progress on the negotiating text. Her team was quick to point out that Canada hasn’t been invited to play that role in 10 years.

Back in Ottawa, Trudeau rose in the House on Monday to defend his government’s agenda, set out in last week’s Throne Speech. Canadians, he said, don’t expect the government to solve all the world’s problems. “All they ask is that Canada do its part.” Whether the Liberals have achieved that should be clearer by the end of the Paris talks.