At Halifax, the armies of freedom wonder what next

Paul Wells: At the annual security gathering, China and Russia were mentioned by just about everybody. Donald Trump, believe it or not, wasn't. 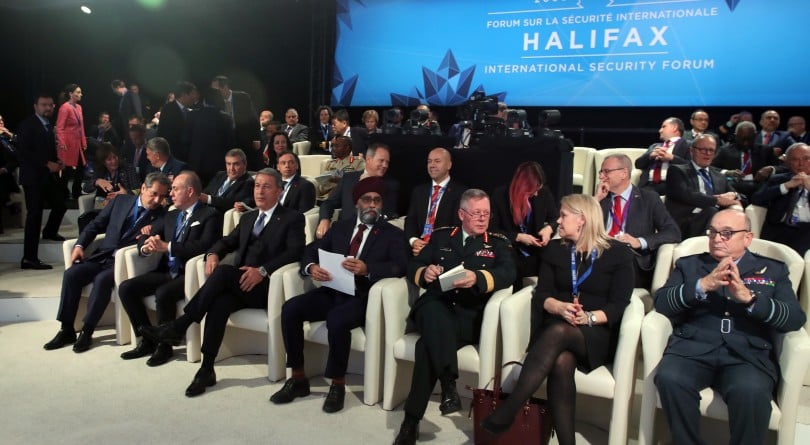 The annual security-and-defense chinwag gathers roughly 300 legislators, cabinet ministers, soldiers, diplomats and think-tankers from around the world each November at the Westin Nova Scotian hotel to ponder what ails the world, beginning on Friday afternoon and ending on Sunday at lunch. But this year dozens of participants on several flights couldn’t get to Halifax on Friday.

Days earlier, a cargo plane from Chicago landed badly on one of the airport’s two runways which sprawl at right angles across the sandy Nova Scotia soil like the arms of a T square. By Friday the airplane’s wreck was still blocking the runway. A backhoe was dispatched to dismember the grounded hulk. Incoming flights had to try to land on the only clear strip. Crosswinds made this tricky. My flight battled close to the ground before giving up and continuing on to Gander, Nfld., carrying a cargo of VIPs including Rose Gottemoeller, the Deputy Secretary General of NATO. Kareen Rispal, the French ambassador to Canada, was on the flight that diverted to Deer Lake. A third plane found itself in Stephenville.

The cargo plane that had descended from the heavens to splatter all this entropy across the landscape had been meant to collect a load of live lobster. Dinner at the Pier 21 museum on the first night of the Halifax Security Forum was lobster. Who could have predicted the crustacean foe would launch such a devastating pre-emptive strike?

Surprises are surprising. It’s in their nature. Once I finally made it to the Halifax Forum—my first visit in four years—the surprises began to reveal themselves, in a succession of panel discussions and one-on-one onstage interviews. The nature of conflict is shifting, and so is the rank order of antagonists. Finally, most troubling, participants often noted the momentum has shifted. For years after the end of the Cold War it was possible to believe democracy was on the march across the globe. Now there are as many reasons to believe democracy is seriously challenged, even losing ground year after year.

The tone was set on Saturday by Gen. Joseph Dunford, the Chairman of the U.S. Joint Chiefs of Staff. Dunford discussed the latest U.S. National Defence Strategy, released in January, which demotes ISIS and al-Qaeda down several notches on the list of the biggest threats to the United States, in favour of China, Russia and a renewal of great-power competition in general.

“Today we can meet our alliance commitments against any potential adversary—particularly if you look at it in a coalition alliance perspective,” Dunford said. “I believe that to be the case in 2018. But I also know that our relative competitive advantage—again in projecting power and operating freely across all domains—has eroded over the past 10 or 15 years as we… focused for a while on dealing with violent extremism.”

The U.S. has been paying the price of that focus on terrorists, Dunford said. “If we don’t change the trajectory that we have been on… if we don’t look carefully at those areas where we are now challenged by Russia, China and frankly others—in space, in cyberspace, in the maritime domain, in the land domain—if we don’t change that trajectory, then whoever is in my job in 2023 and 2024… will probably not have the same degree of confidence in talking about our ability to meet alliance commitments.”

China and Russia were mentioned by almost everybody at Halifax. Probably on average the participants were more worried about China than Russia. “Russia is in destroy mode,” essentially acting as a spoiler, harassing elections across the West with cyber-attacks and trying to drag Ukraine into chaos, said Pavlo Klimkin, Ukraine’s minister of foreign affairs. “China is trying to create structures and rules.”

China is being careful almost everywhere to “keep disagreements just below the level of conflict,” Adm. Philip Davidson, the commander of the U.S. Indo-Pacific Command, said. That includes such methods as “debt-trap diplomacy,” where China lends massive sums to a target country, thus “gaining influence over the borrowers’ sovereignty,” Davidson said.

The challenge, of course, lies in knowing when or even whether to respond to an adversary that isn’t actually doing any fighting, by any standard definition of the word. “If you want to throw a punch, what do you punch?” Gen. Jonathan Vance, the Canadian Chief of the Defence Staff, said. “With what?”

If China and Russia are antagonists—and human migration, climate catastrophe and violent extremism remain massive confounding factors that can hardly be ignored—there was one major world issue that did not get discussed in detail in Halifax: Donald Trump.

As the weekend went on, more and more participants remarked on how little direct discussion there was of the Trump presidency. This was the result of no edict or any agreement based on discussion, and there were notable exceptions. Dunford fielded a question from the audience about the substantial U.S. military deployments to the border with Mexico, a component of Trump’s fixation on the U.S.-bound migrant “caravan” slowly walking its way toward the U.S. “Nothing that we are doing is illegal,” Dunford said. “We are not coming in contact with migrants. Our job is not to deny access of migrants to the United States.”

But at a conference built in large part around an annual visit from a substantial delegation of United States Senators, however much you’d expect Trump’s name to come up, I’m here to tell you it came up less often than that. Partly it’s fatigue. This is the third Halifax Forum since Trump was elected, and the early agitation has had a chance to work its way through everybody’s system. “Do you remember that panel in 2016?” one Halifax regular asked a colleague. “Was that the ‘How F—ed Are We?’ panel?” the colleague replied.

Part of it is pragmatic recognition that, while the Trump White House is a random-event generator, the president has only an intermittent and fitful influence over what the United States does on the world stage. Put your thumb over the guy in the White House to block him out, and you see a rough continuity in NATO’s response to Russia’s invasion of eastern Ukraine.

The bipartisan Congressional delegation was so determinedly collegial and non-confrontational, singly and as a group, that at times they seemed to be emissaries from a parallel-universe United States whose last three presidents had been Bob Dole, Jeb Bush and the New York Times columnist Tom Friedman. To some extent, any conference that is so consensually cagey about a central fact of modern life as Trump is an incomplete conference, but everything in the modern world is socially constructed and it was refreshing to talk about the rest of the world with limited reference to its main agent of unpredictability.

The bipartisan U.S. delegation made me a bit wistful, too. The Halifax Forum was founded and generously funded when Stephen Harper was Canada’s prime minister. The Trudeau Liberals weren’t at all sure what to make of the thing when they came to power. Finally they decided to make good use of it, but Harjit Sajjan was the only Canadian cabinet minister at this year’s edition.

It would make more sense for the Liberals to flood the zone at Halifax—and even, if they felt confident, to make it clear Conservatives and New Democrats would be welcome too. The issues discussed at Halifax don’t go away when governments change, and if hosting the thing is a sign of growing Canadian confidence, a higher degree of Canadian involvement would help entrench Halifax as a key moment in every year’s political calendar.