At one federal department, office pals are risky business

Natural Resources Canada's new code-of-conduct rules assign staff a colour-coded 'risk' level. And if you have work pals, or are a professor, watch out. 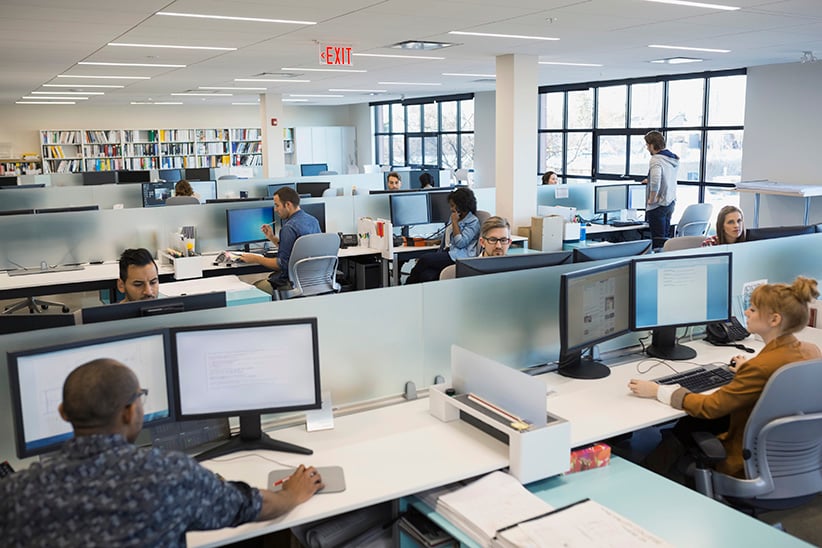 Last month, employees of Natural Resources Canada (NRCan) were asked to fill out and sign a confidential conflict-of-interest document, part of a new code-of-conduct protocol that includes a mandatory training session and meeting with a manager. In itself, this is not unusual. Employers routinely require staff to disclose potential conflicts—financial or personal—that could compromise their ability to do their jobs.

What makes the 17-page “Employee Confidentiality Report” obtained by Maclean’s unique is that it classifies the civil servants’ behaviours—both on and off the job—by “categories of risk”: Red signals “high risk” of conflict of interest, yellow “moderate risk” and green “low or no risk.” The colour-coded model mirrors the terrorism threat-advisory scale created by U.S. Homeland Security after 9/11—except that the threat levels here apply to civil servants, many of them scientists, working for a federal department that oversees Canada’s earth sciences, minerals and metals, forests and energy, and identifies its vision as: “Improving the quality of life of Canadians by creating a sustainable resource advantage.”

The “assessment tool,” sent to 2,000 NRCan employees, with the remaining 1,700 to receive it in the next few months, asks 12 questions about their “position and duties” and 10 about “outside activities,” including volunteer and advocacy work. Any potential conflicts, employees are told, will be resolved by one of five “mitigation measures,” which range from documenting the conflict of interest to asking the employee to resign.

Employees with high public profiles and access to classified materials and strategic decision-making are deemed “high risk.” So are those who have “friends and/or family who are employees in my sector.” (“Friends,” the memo helpfully explains, “refers to persons with whom you socialize outside of work or work-related events.”) In other words, things that in many workplaces would be considered an asset—networking skills, a presence in the industry—appear to be red flags if you’re an NRCan scientist or staffer. Also unusual is an emphasis on employees’ off-duty activities and their social relationships. Having “friends and/or family” within your department is a “moderate risk.” An NRCan spokesperson explained to Maclean’s that by focusing on “friendships in one’s sector, we are highlighting enhanced awareness and understanding of potential situations that could call into question an employee’s impartiality, for example, staffing or for work assignments.”

Oddly, the most common conflict-of-interest concern in most organizations—investments or financial interests dovetailing with operations—comes almost dead last, the ninth of 10 questions.

The Professional Institute of the Public Service of Canada (PIPSC), the union that represents professionals in the Canadian public service, including research scientists at NRCan, has seen conflict-of-interest forms implemented everywhere, but never in such detail, says Laurie Wichers-Schreur, manager of classification and research at PIPSC. “You generally sign off on a general conflict-of-interest statement; if it appeared you were involved in anything that could be construed as conflict of interest, they submitted you to a second form similar to this one,” she says. “In years gone by, it was more focused on sideline businesses; now it’s more focused on political activity.” The initiative is part of a new “performance management system” tracking civil-service performance introduced this spring by the Treasury Board, Wichers-Schreur says, one that will see all departments updating their conflict-of-interest agreements.

The survey has been greeted with disbelief, concern, and some anger within an already demoralized workforce, says a civil servant within NRCan. “It starts off pretty reasonably, but then gets into personal items, such as having friends at the office.”

Employment-law specialists express surprise at that personal focus: “It’s more reaching, in terms of questions about friends and family and advocacy than corporate codes of conduct,” says Toronto lawyer Kumail Karimjee, who speculates that inquiries about family and friends could violate human rights codes. Political neutrality is a tenet within civil service—particularly in the top tier, says Karimjee, who used to work for the Ontario government and encountered a similar requirement there. “I had these sorts of political restrictions. I found it a bit over the top, but this strikes me as worse. It’s ‘Give us all this information and we’ll decide.’ ” The focus appears to be on the employee, not on what constitutes conflict and how to navigate it, he says, unlike corporate conflict codes, which spell out conflict-of-interest situations. “This isn’t that,” he says. “It’s saying, ‘You’re on this spectrum.’ ”

For instance, being “an adjunct professor,” or teaching “at a postgraduate level” is “high risk,” whereas teaching at a “postsecondary (but not postgraduate) level” constitutes a “moderate risk.” While the government says this has to do with balancing other commitments, it may come across as a bias against academics. The NRCan spokesperson explains that, “in cases involving adjunct professorships, it’s important for the employee and the manager to agree on details, including time spent in class and preparing course material.”

Wichers-Schreur points out that having a high public profile, including professorships, is directly linked to scientists’ and researchers’ salary and professional reputations: “Things like being an adjunct professor, or having worldwide recognition, or speaking at conferences, plays into how much money they earn and move through the pay grid,” she says. “The higher their level of recognition and productivity, the more value they are—or were, in the old days.” She’s not sure what’s behind the new classifications: “It’s not clear whether the government is trying to control costs through this measure by maintaining a lower level of compensation for research sciences, or whether this is another way of controlling their access to the broader scientific population or the public,” she says.

Mike Sargent, president of the Natural Resources Union, which represents 1,100 NRCan workers, also expresses frustration with the NRCan survey. “We have no problem with a process for self-evaluation regarding potential conflicts of interest,” he says. “We have a problem with how the questionnaire was attached to ethics with the possibility of disciplinary action.” Questions about friendships can be a pitfall, he says: “If you have a friendship with someone who deals with NRCan in some capacity you might not be aware of, how do you report that?” The union has asked NRCan for a list of companies and partners it deals with, so employees will be able to see where conflict could occur, says Sargent: “They’re unable to produce that list.”

Such personal inquiries contribute to a climate of uncertainty within a public service shaken by widespread budget and staffing cuts, as well as restrictions on travel to conferences and speaking to media over the last four years, says Sargent, who also points to a new security-screening regime that includes fingerprinting and credit checks.

Within NRCan, there’s concern over questions about staffers’ outside affiliations, or, as the survey put it, “advocacy or lobbying in areas related to the mandate of” the department. “If I contribute to Greenpeace, an organization branded as eco-terrorists by some members of the Harper government, would that be taken as advocacy against the mandate of the department?” one staffer asks. (An NRC spokeman says no: “Donations to registered charities would not be considered advocacy.”) Still, the staffer fears the “high risk” labelling will lead to self-censorship: “Asking a civil servant to declare any advocacy activities could have a chilling effect on what they do in their private lives, in case it affects their livelihood.” Wichers-Schreur points to other possible consequences: “If a researcher foresees that taking on a role of adjunct professor with a particular university that might not be to the liking of people evaluating this risk, they might not do it, which, in turn, limits their career opportunities.”

Within NCRCan, many see the Employee Confidentiality Report as a waste of time and taxpayers’ money. The mandatory information session is 2½ hours long; filling out the form takes another half-hour, which adds up to more than 11,100 department man hours. In addition, there’s the time managers spend evaluating each form and reporting suspected problems, as well as on interviews with the employees. The erosion of morale could cost even more, says one staffer.

Some wonder if the whole exercise is redundant. “It’s amazing they are evaluating trustworthiness using an email survey, when all of these people have signed an oath to the Queen,” says a former NRCan staffer. “And most research scientists have an enhanced level of security clearance.” He questions the pre-election timing. NRCan is a front line of climate-change policy, he notes: “I’m wondering if this survey is coming up now, because people within the department have the potential to say things that could embarrass the government.” Ironically, now, they don’t have to say anything; the questions raised by the survey speak for themselves.