Avi Lewis: Obama helped pave the way for Trump, and the same dynamic is at play here 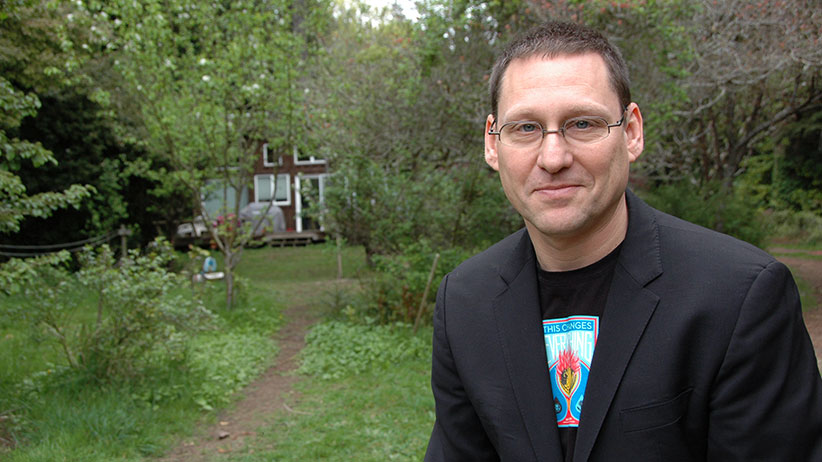 It was way back in the spring of 2016 that the federal NDP voted at a convention in Edmonton to dump Tom Mulcair as leader. But that wasn’t the only dramatic moment at the convention. Party delegates also voted there to formally study the Leap Manifesto, which calls for nothing less than a radical overhaul of capitalism, largely to wean the economy off fossil fuels.

Leap’s demand for no new pipelines was bitterly opposed by the Alberta NDP, and the radical tone of the manifesto overall was regarded with deep suspicion by some experienced NDP strategists. As the NDP leadership race enters its stretch run, with the final “showcase’ for contenders in Hamilton, Ont. on Sunday, we spoke with Avi Lewis, the Toronto-based activist and journalist who is Leap’s most prominent proponent.

Q: Are you satisfied with the degree to which the Leap Manifesto has been debated since the NDP voted to study it?

A: I think there are many different NDPs. I think it is a very live subject at the grassroots, and I think the party establishment has made it pretty clear that they’d rather talk about anything else. That schism between the base of the party and the people who are used to running things behind the scenes is actually the fault line that runs through the party’s present and future.

In other words, there’s a lot of talk about democratizing the party, of listening to the base, but the implosion of Mulcair’s tack to the right in the last election, that disaster and a lot of what happened in Edmonton, spoke to a very clear message. I mean, just dispassionately from the outside, that the supporters of the NDP want it to be a left-wing party. And that hasn’t gone anywhere.

READ: Hamilton has shed its rust. Can the New Democrats?

Q: What’s the evidence for the grassroots interest you mention?

A: It’s reflected in the fact that NDP riding associations are holding these Leap discussions on their own. There are NDP for Leap groups popping up. There’s a fantastically interesting group called Courage which is an attempt to push the NDP to the left in the way that Momentum helped push Jeremy Corbyn’s leadership within the Labor Party. There are all of these currents coming from below. And meanwhile the people who are the pragmatists, the centrists who are used to running the party, are trying to figure out a way to navigate these currents.

Q: Let me see if I can frame a question that gives some sympathy to those pragmatists. They must feel like they’re up against a Liberal party that commands a fair amount of affection on the left. Justin Trudeau’s government is trying to impose a price on carbon, they’re fighting to change taxation of small businesses so rich people can use those rules to their advantage. Isn’t all that bound to be appealing to the centre-left and even the left-left?

A: You may have described a handful of people somewhere, but that’s not the reality that I see. I would frame it very differently. I think Trudeau rode a wave of progressive energy to power, and has systematically betrayed and walked back almost every significant promise that he made to harness that progressive energy for his historic victory.

The opportunity for a party that does believe in genuine recognition of Indigenous land rights and of a process of justice before reconciliation can take place, a party that really believes in electoral reform and making it fair so that the government reflects the will of the people, that really wants infrastructure to be built that takes us rapidly towards a renewable economy in the face of climate catastrophe, that stands up to Trump instead of sucking up to Trump—there’s a huge appetite for that and the Liberals are incredibly vulnerable. And that’s precisely the electoral opportunity for the NDP, if the party can summon itself to seize it.

Q: Let’s say that you’re right about that big opportunity. Has the NDP already missed the boat by not having that kind of debate during this leadership race, or is it possible that the new leader could somehow grab that momentum after winning?

A: I think what you’re seeing is a party that really is having submerged debate precisely along those lines. I think what’s striking about all four leadership candidates—with the exception of Niki Ashton, who is playing more overtly to the left—is that they’re all trying to thread the needle between the expectations of the Ottawa bubble and the fear of being portrayed as outside the politically acceptable by the guardians of the mainstream—and I regret to include you in that class John—

A: —and navigate the tension between the asphyxiating boundaries of what’s considered politically acceptable in this country, and the genuine desire and the energy around a much more ambitious left-wing platform. So I think that’s not happening in the leadership debate, and I think it would be healthy if it did.

But I know that it’s happening within the party. I keep getting invited to NDP riding association meetings where they want to have these debates. They’re not getting support from the party central, but they are determined to have them anyway. So I think the Leap has become a manifesto that NDP candidates dare not speak its name.

READ: In looking for a winner, the NDP mostly avoids divisive debate

Q: So does that mean the vote to study Leap at the Edmonton convention didn’t amount to much?

A: What happened on the floor in Edmonton—and I was there and watched that vote unfold—really was I think significant, and had a profound effect that I didn’t expect on the dimensions of this leadership race. Like if you think back to Edmonton it was like pipelines were going to be the big divider. Mulcair, like Trudeau, like all politicians, felt the need to pick a pipeline to cheer for, and just say that they were against the others. Of course, except for those politicians who loved every pipeline they saw.

In fact all of the candidates have come around to being pretty clearly anti-pipeline. I think Charlie Angus is the closest to supporting one, but he clearly doesn’t feel that within the party that’s a popular enough position to actually come out and say what he may believe. At least, he sent a lot of mixed signals. But Jagmeet Singh came right around. He was equivocating and he clarified his position. So on pipelines, which are an unreasonably inflated part of our political debate, but actually do point to fundamental issues of our economic future, you’ve seen the effect of the Leap.

Q: In that respect only?

A: In other ways, too. Niki Ashton’s environmental justice platform. The centering of Indigenous rights is something that the NDP has been strong on for a long time. Guy Caron’s flagship policy is a universal basic income. I don’t think there’s anything universal or basic about his proposal, it’s another tax credit, but the language there is also in the Leap Manifesto.

Q: Let me ask you something about the international context. I think a lot of progressives in the U.S. would say to a Canadian, “We have this terrible problem with Donald Trump, but your guy Justin Trudeau seems cool.” In an era when Trump and Brexit stand as a warning of what can happen, isn’t Trudeau a lesson for progressives about the need to find alternatives that can win with voters?

A: Sure, there’s no question, I think, that Justin Trudeau could win the nomination of the U.S. Democratic Party right now. Sure. But those folks aren’t nearly as informed as we are in Canada about the genuine dimensions and failures of his policy approach.

The United States had eight years of Barack Obama. He made it incredibly clear that he was a right-wing Democrat. He cited Ronald Reagan lovingly in every stump speech for the last six months of the presidential 2008 campaign. And he made it clear that he was going to be a business-friendly Democratic president, and that he was not going to rock the neoliberal boat. And he didn’t.

And people fell into the cleavages in American society. Working people sleeping in their cars and working three or four jobs. The forgotten people that Donald Trump harnessed so successfully in that ugly right wing populism that emerged. That was the direct legacy of the failed neoliberal experiment of the Obama years.

You have frankly a business-friendly inequality-producing economic model that has an incredibly appealing progressive face on it. And that’s what we got in Canada right now. We’re going to see all of these same dynamics to play out in Canada if we think that progressivism is a veneer that can be pasted on right-wing economics.

Q: To circle back to the NDP, I take it you think the party is susceptible to what you see as a kind of shallow progressivism?

A: What we need to do is explode that narrow, narrow box of what’s politically possible and introduce the political possibility for solutions which are just vastly more ambitious.