Away from the trail, TPP talks at crucial juncture 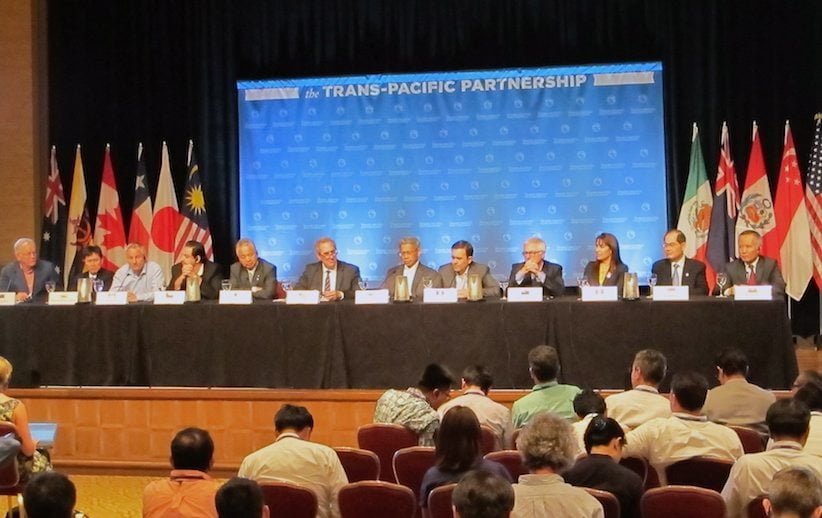 The prime minister says Trans-Pacific Partnership negotiations, which failed to reach an agreement late last week, are still ongoing, and Canada remains at the table, notwithstanding the dissolution of Parliament.

Global trade is a cornerstone of the Conservative economic approach: Harper says Canada had just five trading partners when the Conservatives came to office in 2006, and now has concluded trade negotiations with some 44 countries.

Officials say last week’s talks in Hawaii came close to reaching a deal, with Canada offering to allow more dairy imports, but the offers were far from what New Zealand and Australia were asking for.

The Trans-Pacific Partnership, “should it be concluded, will in our view form the fundamental trading network of the entire Asia-Pacific region,” Harper said.

“So it is important that Canada remain at the table; we will remain at the table during this election campaign, we will be there to advance and protect our interests in every sector, including supply management, dairy, and we will make sure that should there be a deal, we will get the best possible deal for this country.”

Harper also promised today that a Conservative government would spend $60 million a year on increased and extended tax credits for businesses that hire would-be tradespeople.

The Conservatives would increase the maximum credit, first introduced in 2006, to $2,500 from $2,000, and also extend it to the third and fourth years of eligible apprenticeship training.

The measure would deplete public coffers by $60 million a year, starting in 2016.

Harper’s campaign itinerary takes him to Kingston, Ont., later today, followed by a rally at a golf course in Ajax, east of Toronto — the former riding of his longtime finance minister, Jim Flaherty.