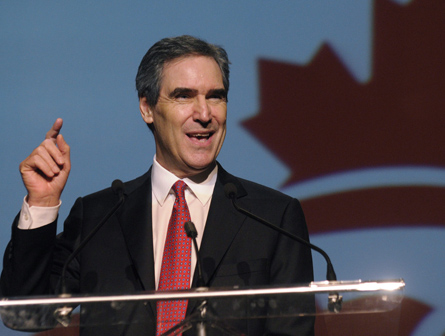 How disappointing to read that Michael Ignatieff entered the hall at his fund raiser in Toronto yesterday to the stammering vocals and familiar chunky guitar riffs of “You Ain’t Seen Nothing Yet.”

It’s not that I have anything against the BTO hit, or that I suspect Liberals might be courting bad luck by using what was, in fact, one of Al Gore’s 2000 campaign songs, or even that the line at the end of the chorus (“B-B-B-Baby, you know, you know, you know, you just ain’t seen nothin’ yet/ You need an education, got to go to school”) might tend to confirm suspicions that Ignatieff is an academic elitist.

No, my objection is that the song is just too mundane a choice for the man entering the room. Surely a guy with Ignatieff’s lineage and aura needs a theme song less quotidian than a boomer radio staple, albeit one with a special place in the hearts of Canadians of a certain vintage (pace, Randy).

I’m not sure what to propose, though. Colleague Wells mentions Tchaikovsky’s “March of the Toy Soldiers” from The Nutcracker. I’m not sure if Paul means to indicate the Russian side of Ignatieff’s heritage or perhaps a toy-soldierly quality he perceives about the Liberal ranks.

The sad news of the death of movie music composer Maurice Jarre this week has me thinking about his evocative melodies, so if we must have a Russian-flavoured theme for Ignatieff, why not something from Jarre’s beloved Academy Award-winning Doctor Zhivago soundtrack?

Not “Lara’s Theme”—too weddingy. Maybe the rousing “Lara and Komarovsky Dancing up a Storm.” Definitely not the track entitled “After Deserters Killed the Colonel.” Too many bad Liberal memories.