Back on the political interference investigation merry-go-round

Politics Insider for May 13: Opposition MPs want Norman inquiry, Trudeau's mom takes the stage and a round-up of the weekend politics shows 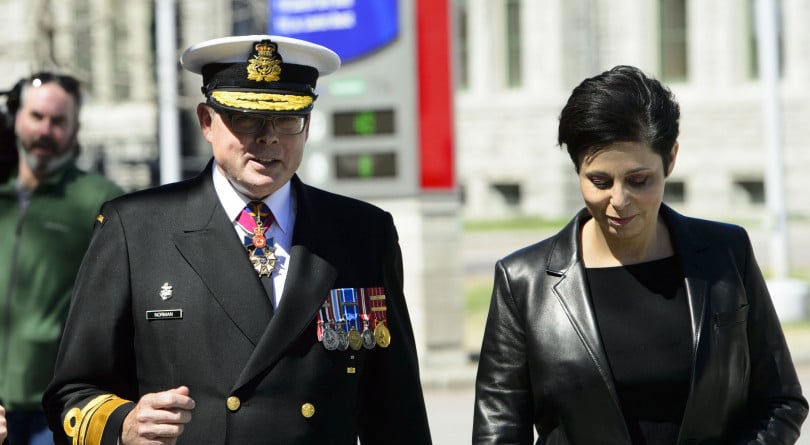 Vice-Admiral Mark Norman walks with his lawyers Marie Henein and Christine Mainville as they leave court in Ottawa on Wednesday, May 8, 2019. (Sean Kilpatrick/CP)

Inquiry déjà vu: Now that federal prosecutors have dropped their case against Vice-Admiral Mark Norman, the Conservatives and NDP are pushing for the national defence committeeto to launch an investigation into the affair. (CBC News)

Four opposition MPs sent a letter to the clerk of the committee yesterday alleging that Prime Minister Justin Trudeau influenced the case when he speculated in 2018 that Norman would wind up in court, and they say the case has had a “deleterious effect on the morale of the Canadian Armed Forces.” Among the witnesses the MPs want to hear from: Norman, Trudeau, Defence Minister Harjit Sajjan and Justice Minister David Lametti.

But while it only takes four MPs on a committee to force a meeting to debate the merits of launching an investigation, no investigation will happen unless a majority of MPs on the committee support it. So will the Liberals who dominate the committee be more inclined to investigate allegations of political interference in the Norman case than the Liberals on the ethics committee were about allegations of political interference in the SNC-Lavalin case?

‘Entirely independent’: Last Friday Trudeau avoided reporters’ questions about whether he would launch an inquiry, saying only that his office in no way interfered in the case: “Canadians understand that judicial processes, police investigations and court proceedings are all entirely independent of the government of the day, certainly of the Prime Minister’s Office. That is the way it should be.” (Globe and Mail)

Drama: The Prime Minister spent Mother’s Day in Chicago at the Second City UP Comedy Club to catch his mother Margaret Trudeau‘s performance of her one-woman show “Certain Women of an Age,” and was clearly moved by it all. (Chicago Tribune)

Maclean’s own Shannon Proudfoot took in the show on opening night last week, which included Margaret leading the audience in a chant of “F–K YOU!”:

When the show started, Trudeau literally leaped out of the wings to land on stage: ta-da, here’s Margaret! Her entrance, like the entire show, felt like an exercise in choosing, directing and using the spotlight that had burned her earlier in life.

“Maybe you heard whispers about me,” she said, cupping her hands around her mouth and leaning conspiratorially toward the audience to hiss, “Margaret is crazy!” Then she continued cheerfully: “You don’t have to whisper. I was crazy!” The audience was hers. (Maclean’s)

Deal or no deal: If the U.S. Congress doesn’t ratify President Donald Trump‘s USMCA trade deal, expect him to send a NAFTA termination letter to both Canada and Mexico, say trade experts who spoke with Maclean’s reporter Aaron Hutchins about how things might unfold if Trump doesn’t get his way. That doesn’t mean termination will actually happen, but it will kick off another period of uncertainty and chaos. (Maclean’s)

Proportional representation, Election 2019 edition: In 2017 Trudeau scrapped plans to implement electoral reform, breaking his 2015 campaign promise that “this election will be the last contested in First-Past-the-Post.” But what if the reforms had happened. More specifically, what if election 2019 were fought in a proportional representation system? 338Canada’s Philippe J. Fournier teleported into that alternative universe and deployed his election modelling tool to project the results. Based on the latest available polls, the Conservatives would grab 125 seats in this “politics-fiction,” the highest among the parties, but not enough to secure them a majority, followed by the Liberals’ 108 seats. Meanwhile the NDP and Green Party would take a combined 90 seats. Let the (hypothetical) jockeying begin. (Maclean’s)

Didn’t catch the politics shows over the weekend? Here’s what you missed.

Marked: The Mark Norman affair got plenty of air time on all three weekend shows. On CBC’s The House, Conservative MP Erin O’Toole alleged the Trudeau government made Norman the fall guy for the leak of information about a major shipbuilding contract: “My conclusion is they felt that one name needed to be put to blame for the Cabinet leak. I think [the Liberals] were embarrassed by it. They handed one name, I think, to the RCMP and that was Mark Norman. Why was that done?” (CBC News)

Regrettable: Defence Minister Harjit Sajjan said on CTV’s Question Period that he regrets what Norman went through but repeated the government line that at no time did politics influence the investigation: “I have a deep respect for everybody who serves… I regret that the fact that Admiral Norman had to go through [it]… I regret the fact that the system had to go through this. … But when something like this happens… you have to respect the independence of the process.” (CTV News)

Ya think? Speaking on Global’s West Block, Public Services and Procurement Minister Carla Qualtrough admitted that Trudeau predicting not once but twice that the Norman case would go to trial maybe perhaps wasn’t a good idea: “I know. I know that’s how it was perceived and I think, in hindsight, not the best framing of words, I can assure you. But at the end of the day, there wasn’t political interference here.” (Global News)

No way Huawei: Conservative Leader Andrew Scheer promised to de-politicize military procurement during his appearance on Question Period, while he repeated some of his foreign policy platform promises, like banning Chinese telecom giant Huawei from working on Canada’s 5G network. (CTV News)

How bad is it? Speaking of China, relations between Canada and that country are at their worst in at least 25 years, if not longer: “I think it’s certainly the worst since Tiananmen Square and there are other signs that this is kind of the hardest moment in bilateral diplomatic relations since we established diplomatic relations in 1970,” says China expert and University of British Columbia professor Paul Evans. (Global News)

Get out the vote: Elizabeth May insisted on West Block that she isn’t trying to steal voters away from the Liberals or NDP. Instead, her goal is to attract those voters “so disgusted by politics that they don’t vote at all.” (Global News)

Pick one: Immigration Minister Ahmed Hussen struck back at critics who claim the government’s decision to slip tighter refugee asylum rules into its omnibus budget bill was about keeping certain people out. Speaking on The House, he said it’s all about efficiency: “We’re getting efficiencies everywhere that we can. And one of the ways to do that is to say to someone ‘Look, if New Zealand, which has a robust domestic asylum system, is willing to give you protection and you’ve already initiated a claim there you don’t really need access to the immigration [system]. The fact of the matter is I’m very confident in our record.” (CBC News)