The minister for diversity and inclusion and youth hopes the Liberals can document their lessons learned for the benefit of future governments, but she's not willing to say much about the failed student service grant 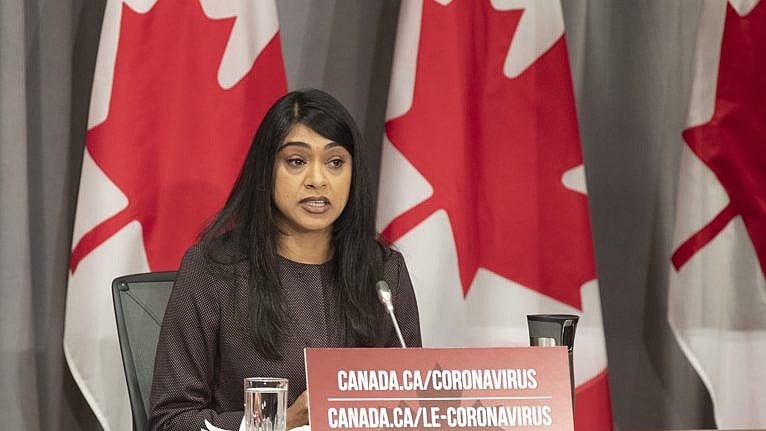 Minister of Diversity and Inclusion and Youth Bardish Chagger during a Government of Canada briefing in Ottawa on June 25, 2020. (Lars Hagberg/CP)

Bardish Chagger is Canada’s first-ever minister for diversity and inclusion and youth. Chagger has sat at the cabinet table for every second of the Trudeau era, including stints as minister for small business and government House leader. A few months into the pandemic, Chagger found herself in the hot seat for her role in the WE Charity scandal that rocked Ottawa for much of the summer—and eventually led to Bill Morneau’s resignation as finance minister. Chagger’s contacts with WE before the program was announced came under intense scrutiny. As 2020 winds down, Chagger spoke to Associate Editor Nick Taylor-Vaisey about what her job entails, why her portfolio was so important in a pandemic and whether or not she would do anything differently if she could do it all again.

Q: What exactly is a minister for diversity and inclusion and youth, and what do you do?

A: In Canada, diversity has always been one of our greatest strengths. Yet, we know that a multicultural society, one that is truly open and inclusive, is always a work in progress. It demands our effort and our attention and our care. Having a full voice at the cabinet table to ensure that we are conscious about the decisions we are making to be inclusive is essential. Yes, we need to celebrate our diversity. But diversity comes in many different ways. Diversity of regions, perspectives, gender. We need to include all of that so people can realize their potential and be their true, authentic selves, which would benefit the entire country.

Q: Your mandate letter includes 23 priorities. That’s a lot of priorities. Which are your top priorities this year?

A: The pandemic, which has impacted the entire world, all Canadians and disproportionately certain segments, has really shone light on the systemic inequalities that exist in our country. As we are building back even better, something that’s important to me is making sure we’re also building back consciously more inclusively. So that we’re ensuring underrepresented and underserved communities’ voices are not only just being heard, but represented.

That’s where it’s essential, in all aspects of my portfolio, for that to be the underlying foundation. So whether it’s my work with the youth secretariat or the LGBTQ2 secretariat, or the anti-racism secretariat, it’s essential that these voices inform, at minimum, through their lived experiences, the policies and programs we advance—so they help the very people that we are here to serve.

Q: Did you have to throw the mandate letter’s framework out the window because the pandemic disrupted how the government functioned?

A: My mandate letter actually became more relevant because of the pandemic. I think the pandemic has exposed the need for this portfolio. We can’t leave people on the sidelines. We have to make sure Canadians are able to contribute, to realize their potential, to be themselves, to help strengthen their communities and our economy.

Q: When you look back at 2020, what were your biggest accomplishments?

A: I’m proud of the anti-racism action program, and the 85 projects that were announced from coast to coast to coast with an investment of $15 million. We were able to make a virtual announcement and connect these projects and organizations with each other across the country, which actually helps to build that network of working together to build back consciously inclusive.

I really appreciate that we set up the equity-seeking task force through the public service, so we were more conscious and cognizant about the decisions we were making when it came to equity-seeking communities. That’s something that happened with the partnership of the anti-racism secretariat, as well as Women and Gender Equality Canada, and they had people from all departments and agencies that are part of this table so that we were actually aware of who we were making decisions for, and who is not being represented.

Q: Where didn’t you make more progress, but wish you had?

A: The Government of Canada did make investments in 15 projects when it comes to the blood ban for men who have sex with men. I look forward to seeing progress on the results of the research to see if that blood ban can be eliminated. It is not only a campaign commitment, but I think evidence will prove we can eliminate the deferral period. I would like to see that move ahead.

Q: Ending the blood ban was a Liberal election promise in 2015. You’ve taken some action on that, reducing the period during which men can’t donate after having sex with men to three months, but the fact is a ban does remain. Why is that? And what will it take to end it?

A: Our government believes in making decisions based on evidence and science. That’s where it’s great that it was able to come down to three months. We have made investments in research, and we look forward to Héma-Quebec and Canadian Blood Services asking for that deferral to be removed. Everyone is aware it’s in our platform commitments, everyone is aware that we are paying close attention to that. We want to see that through.

Q: Who still needs to be convinced?

A: I’m not basing my discussion on ideology. I’m basing it on science and evidence. The research that’s being done—we need to get that research. If because of the pandemic people were not able to do that work or do that research or obtain that evidence, I can’t comment on that situation. Many people have been derailed from the work they were doing.

Q: Your colleague Carla Qualtrough has told me a couple of times that the Liberal government took more risks in the pandemic out of necessity, and she was open about some of the mistakes along the way. If you had a second chance, what do you think you would have done differently?

A: There was no playbook when it came to the global pandemic. Everyone has had to respond to it in their own way. I actually echo some of Minister Qualtrough’s comments. I actually think our government was able to respond really quickly. We had to push really hard to get the response to be as quick as it was. You can always push for better.

I do appreciate that we did course-correct on numerous occasions based on feedback we were getting. MPs being able to be in their ridings, because we were all working remotely, was really important because you could actually get to hear directly from your constituents.

Based on the information we had, we continued responding and working all around the clock. There’s been a lot of learning that’s happened. I would hope we do document this so that if there was a need to have a similar response, whether it’s this government or a future government, that we actually have the best practices shared so we aren’t starting from square one.

Q: The pace of government sped up dramatically in those early months, with such condensed timeframes.

A: Condensed, but measures were always in place. It’s sometimes just a matter of looking at the processes. A longer process doesn’t necessarily make it more effective. That’s where we do need to look at the pace that government travels. I think we’re going to have to have these conversations. Now that Canadians know we can respond quicker, there might be a new expectation out there.

Q: What did you take away from the controversy surrounding the Canada Student Service Grant? Is there anything you would have done differently there?

A: The Canada Student Service Grant was part of a suite of programs we were advancing for youth and students. This program was an additional program to recognize the diversity of needs that young people have. When it came to young people needing to pay their tuition and rent, we made sure the Canada Emergency Student Benefit was there. For students who wanted to gain work experience, we modified the Canada Summer Jobs Program, as well as strengthened other programs for young people who are entrepreneurs and wanted to set up their business.

When it came to the service grant, we were working at a historic pace. We’ve never had to respond to a pandemic. Yes, a lot was learned. Yes, the program did not unfold the way we intended it to. But what is clear is that young people have also been impacted by this pandemic and our government will continue to respond to those needs.

Q: But is there anything you would have done differently?

A: The program did not unfold as we wanted it to. We know the importance of service opportunities across the country, and that’s why our government has advanced the Canada Student Corps. That’s why we have a youth policy for the first time in the history of our country. Did we learn? Yes, we’ve learned a lot throughout the pandemic as to how we ensure that we are agile enough to modify programs as needs arise.