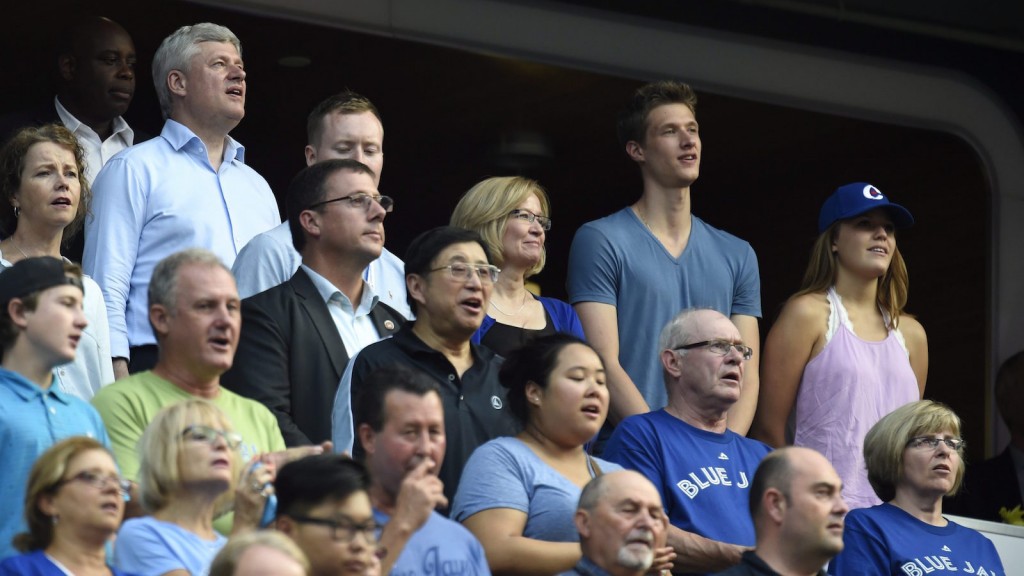 Stephen Harper is not one to vacate his seat early. With the Toronto Blue Jays trailing 4-2 in the bottom of the ninth, a group of fans sitting next to the Harper family in the “TD Comfort Clubhouse” section behind home plate left early to beat the traffic. But not the Prime Minister. He stayed until the very last out.

A well-known fan of hockey, Harper was also alert at the baseball diamond, hunching forward with his chin on his fists during key at-bats. He looked like a student of the game. He jumped to his feet in the bottom of the fifth inning when Jays third baseman Josh Donaldson hit a triple to bring in two runs and put the Jays up a 2-1. (As it happens, when the crowd of 46,643 chanted “M-V-P! M-V-P!” for the Jays slugger, it could easily be mistaken for shouts of “N-D-P! N-D-P!” One fan even brought a “Josh Donaldson for PM” sign to the ballpark—and he’d likely get a few votes if he could run for office.)

Alongside his wife, Laureen, and their children, Ben and Rachel, the latter wearing a Conservative Party “C” logo baseball cap—a blue that could easily be mistaken for the Jays colours—Harper gamely posed for pictures for a long line of supporters. Sadly, however, the ballgame did not have a picture-perfect finish.

When Donaldson struck out to end the game, it left Canada’s team with a 0-2 record in the month of August when federal party leaders were present. (The Jays also lost two weeks ago, when NDP Leader Thomas Mulcair was at the ballpark.) Otherwise, Canada’s lone major league team had a red-hot month with a 21-4 record when a federal party leader was not in attendance.

In a sport where players (and fans) are notably superstitious, social media was quick to lay blame on Harper for the loss. Jays coach John Gibbons, however, explained he was more than happy to meet the Prime Minister during batting practice before the game started. “I see him on TV. I know there’s an election coming up. He seemed like a great guy,” Gibbons said after the game. “I told him I love his politics. We’re both probably outnumbered in town here, but I love his politics.”

The Jays players, on the other hand, can be forgiven if they know little about the Prime Minister. Most of them are from the United States or Central America, and have lived in Canada part-time for a very short period. “Zero,” “Not one thing,” and “Not really anything,” were answers from the Jays pitching staff of David Price, Mark Buehrle and Drew Hutchison (all Americans) when asked how much they knew about Stephen Harper.

And though the Prime Minister mingled with the Canadian Little League Championship team from White Rock, B.C., before the game, and chatted with the only Blue Jay to be inducted into the Baseball Hall of Fame, Roberto Alomar, Harper didn’t speak with the current Jays roster. “I didn’t even see him today,” says Russell Martin, the Blue Jays all-star catcher and lone Canadian on the team. “They told me he was out there and wanted to meet me, but I didn’t get a chance to. I don’t even know if he’s a baseball fan.”