Batter up! Thomas Mulcair steps up to the plate.

This October, our election season is looking a lot like baseball. And with two strikes, once-mighty Mulcair is up to bat. Will there be joy in Mudville? 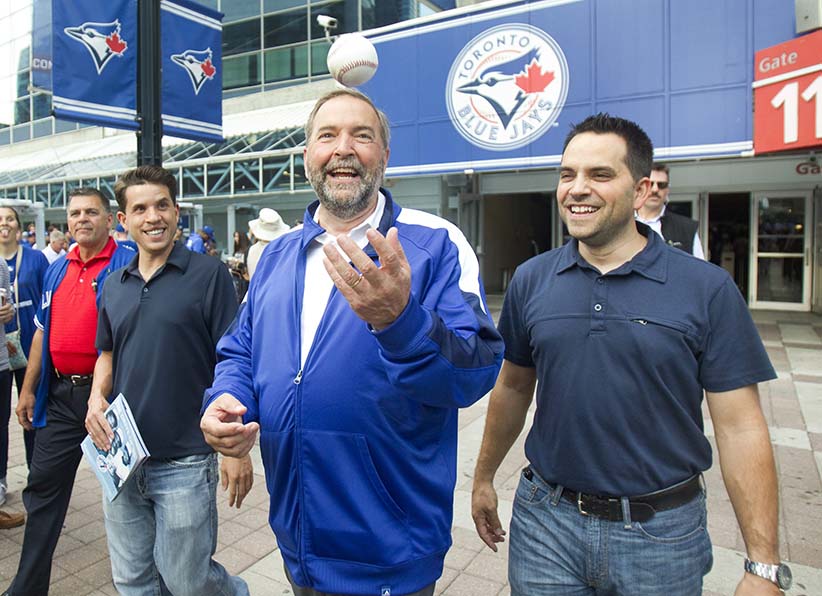 NDP leader Tom Mulcair arrives at Toronto Blue Jays game with his sons Matt and Greg prior to the start of AL baseball game against the New York Yankees in Toronto on Friday August 14, 2015. (Fred Thornhill/CP)

Watching Tom Mulcair swing at Stephen Harper’s freshly inked trade deal, the Trans-Pacific Partnership (TPP), it would be hard not to think of that hoary old baseball poem, “Casey at the Bat.” The great veteran politician Mulcair is in the campaign’s final innings, and there hasn’t been much joy in NDP Mudville. The party trails in the polls. But with the TPP, you sense this is Mulciar’s last chance. What he does now might change the entire campaign.

“We have a distinct position on the TPP from the Liberals and Conservatives, and we’ll be driving it in the last weeks of the campaign,” says Brad Lavigne, the NDP’s senior campaign adviser. At a rally on Oct. 5, you can actually see Mulcair waggle his rhetorical bat. He’s reconfigured his great bearded face from the chummy smile he deploys in the campaign ads—a smile that can look like a laundry line sagging under wet clothes—back to the old rictus of rectitude we’d seen in question period. It suits him better. “I will not be bound by Stephen Harper’s secret deal!” he thunders.

At a moment when our country is gripped by twin fevers—election and baseball—it’s difficult to avoid the comparisons. In America, baseball is enjoyed almost as much for its metaphorical richness as for its transient moments of excitement. In Canada, the Blue Jays have a knack for timing their periodic ascensions with our transformative elections, as they did back in 1993. The key to success in either endeavour, of course, is plotting a path to victory. But to make it work, a team needs an identity, a rallying cry. Will the TPP make Mulcair Mr. October, or Casey at the bat?

Mulcair likes to swing for the fences—kill the Senate, no to the war, balanced budgets—but the offerings so far have baffled him. He expected high heat aimed at his progressive chin from the veteran pitcher Harper, but it didn’t come. Instead, Harper threw a knuckleball, the niqab. It wiffled and danced and dazzled, jiggling in ways Mulcair couldn’t follow. He swung wildly at it in the debates and missed. Quebecers are not with him on the matter, Mulcair knows, but he won’t play politics on an issue he calls “dangerous.” His fans cheered him for integrity, but polls dropped. Strike One.

Mulcair also prepared for a change-up. After all, his mentor, Jack Layton, had practically invented it. With haughty grandeur, Mulcair presented himself as the only one who was ready for the change-up. Experienced. New. But that, too, has proven elusive, as a younger, flashier swinger named Trudeau is whacking those change pitches out of the park. Strike Two.

But the TPP is right in the zone: 20,000 auto jobs on the line; farmers protected by tariffs at risk. Here’s something Mulcair can hit. He pounds with cruel violence his bat upon the plate . . .

Lavigne, like a good sabermetrics manager, outlines how this issue could work to bring the NDP to power: Pick up seats in Atlantic Canada, hold at least 50 seats in Quebec, snatch five seats in southwestern Ontario where the auto issue resonates, steal three seats in Manitoba, break through in Saskatchewan in three ridings, win three more in Alberta and flip six new seats in B.C. The perfect storm.

The other teams scoff. “He looks transparently political and people can see through it,” a senior Liberal said. “Mulcair has an identity crisis.” Liberals point to a clip of Mulcair on Aug. 4, in which he said publicly that he “enthusiastically supports” the TPP. It’s a great clip for an attack ad, but it conveniently cuts off the part where Mulcair says he’s deeply concerned about supply management and doesn’t trust Harper.

If the Liberals are accused of overcompensating for Conservative criticism on security when they supported the anti-terror bill, the NDP is accused of overcompensating for criticism that it runs deficits by promising balanced budgets. Ekos pollster Frank Graves will tell you that the NDP’s balanced-budget plan has backfired in two ways. First, it’s not an issue progressive voters are passionate about. Second, it has lent legitimacy to Harper’s economic plan. Liberals believe the TPP is washed out by the change wave they think they have captured.

For Harper, though, the TPP is a gift and a genuine accomplishment. The Prime Minister moves from caretaker to change-maker. It’s new inventory in what was a tired shop window. By giving $4.3 billion over 15 years to farmers and $1 billion to auto workers, he’s doused the fire Mulcair is trying to light. But he has lit his own culture-war fire around the niqab and the inexplicable barbaric-acts snitch line. This could be the Conservative party’s path to victory.

The key now is Mulcair. If he hits a home run on the TPP, he could kick-start the orange wave. There’s still time. If he hits a single and merely stops the NDP slide, he may fulfill Harper’s dream of a split vote, ushering in another Harper mandate. But if, like Casey, he strikes out, the orange wave could turn red and Trudeau could grab a lead.