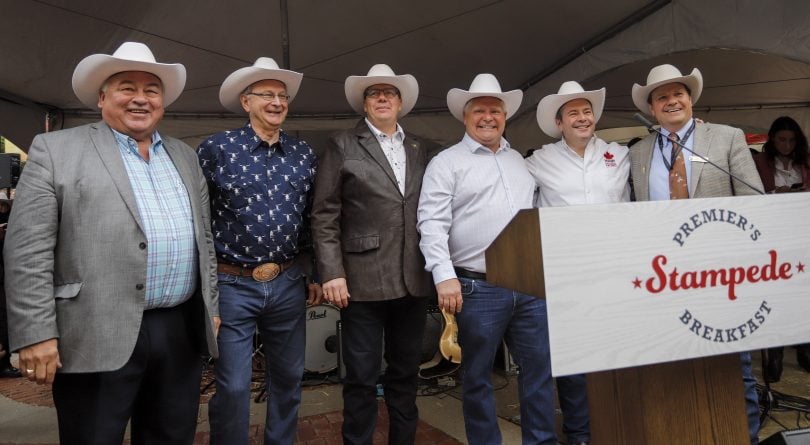 The campaign trail: The federal leaders hit the road over the weekend to deliver their pitches to crowds in Alberta and Ontario. Conservative leader Andrew Scheer, spatula in hand, and Green leader Elizabeth May descended on the Calgary Stampede on Saturday. Said May, “I think that for any federal party leader if you don’t recognize that Calgary Stampede is a must-do stop on your summer schedule you’re just not paying attention.” (CTV News)

Calgary was a must-do stop for Maxime Bernier, the People’s Party of Canada leader who is trying to lure right-leaning voters away from Scheer. “If you’re a real conservative, you have two choices: to vote for a fake conservative, Andrew Scheer, or to vote for a real one,” he said during a speech, while also announcing his local candidates. For his part Scheer shrugged off Bernier’s attack. When asked about Bernier’s candidate announcement, Scheer reportedly said “Who’s that? Sorry?” (CBC News)

Prime Minister Justin Trudeau‘s office said he would make his way to the Stampede at some point, while on Saturday he stayed around Toronto, delivering speeches at a union event and a convention for the Ahmadiyya Muslim community. NDP leader Jagmeet Singh didn’t attend any public events. (Canadian Press)

Blame America: The Alberta government’s campaign against U.S.-backed environmental groups is a symptom of the strain felt by the industry since the fracking boom in the U.S. drove down prices, writes Stephen Maher, and it ignores the reality at the heart of the battle between pro-oil and environmental groups:

You can’t campaign against changing market conditions, though, and every good story needs a villain, so the oil patch’s spinners settled on foreign-funded environmentalists who are in league with Justin Trudeau in a conspiracy against hard-working Albertans.

It doesn’t matter much that the details don’t stand up to close scrutiny when the audience is primed for a good yarn. Many in Alberta, for instance, suspected that Trudeau spent $4.4 billion on the Trans Mountain pipeline so that he could kill it, right up until he announced that construction would begin this summer.

The fact is that both sides in the political struggle over the future of the oil sands are taking their lead, and taking money, from Americans. (Maclean’s)

Blame Canada: The video clip posted last week by French Presidential Palace showing Ivanka Trump trying to insert herself into a conversation among world leaders can trace its roots back to Canada, writes Anne Kingston:

Canada can take a bow for enabling the president’s daughter’s rise under the vague, feel-good mantle of  ‘women’s empowerment,’  a journey that began with her perch next to Trudeau in the White House’s Cabinet room in 2017, presiding over the first meeting of a newly formed “United States-Canada Council for the Advancement of Women Business Leaders-Female Entrepreneurs.” (Maclean’s)

Didn’t catch the weekend political shows? Here’s what you missed:

Come together: Tomorrow until Thursday the premiers will be meeting in Saskatoon for the last time before the federal election, and B.C. Premier John Horgan is urging his fellow provincial leaders not to get bogged down on divisive issues like carbon taxes and the Trans Mountain pipeline expansion when there are other important files, like interprovincial trade, that need to be discussed. “We have a range of perspectives at the table,” he said on CBC’s The House. “It’s critical to our federation that the federal government recognizes responsibilities and roles for the provinces, and also that the provinces recognize the role and function of the federal government.” He also said those expecting fireworks as pro- and anti-pipeline premiers come together will be disappointed: “Premier [Jason] Kenney and I both recognize that there’s more value in trying to find the things that bring us together than to focus on those that are obviously taking us apart.” (CBC News)

Exit interview: Three departing MPs — Fin Donnelly, NDP MP, Conservative MP Guy Lauzon and Liberal MP Frank Baylis — stopped by Global’s West Block to reflect on their reasons for not running again and what they thought of the state of federal politics. Aside from wanting to spend more time with family, Baylis said he was disappointed by what he saw in Parliament:  “I was not happy with some of the things in Ottawa: the way debates take place and the lack of what I call constructive debate, maybe a lack of civility and respect too.” (Global News)

Talk it out: Following on the heels of Scheer’s demand that the Trudeau government take a tougher stance with China, Nova Scotia Liberal Premier Stephen McNeil said he prefers “dialogue, not protectionism“: “There’s no question China believes that Canada is in the middle of a fight between the U.S. and China. They have a hard time understanding why we’re there. … We need to continue to demonstrate to them why the federal government is part of this, why they’ve become part of this.” (Global News)