Because it's 2019: A look back at Trudeau's original cabinet

A look back at Trudeau's original, sunny ways cabinet reveals just how much has changed in a few short years of Liberal rule 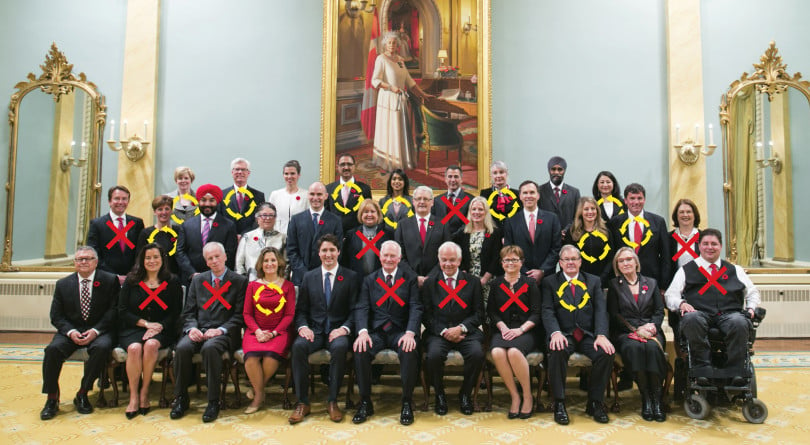 “Because it’s… 2015.” That was how Prime Minister Justin Trudeau answered a reporter’s question about why he valued gender-balance so highly on the day he revealed his first cabinet to the country. The 31-member group was a fresh face for Canadian politics after almost a decade of governance by the Stephen Harper-led Conservatives. Now, with the SNC-Lavalin scandal forcing the government through shuffle after shuffle and some big name expulsions, Maclean’s looks back at that first cabinet, and asks simply, where are they now … and why?

Jody Wilson-Raybould
Then: Minister of Justice and Attorney-General of Canada
Now: Independent MP
What happened: In January, Wilson-Raybould was shuffled to the Veteran’s Affair portfolio, she claims as punishment for her refusal to accede to pressure to help SNC-Lavalin avoid a criminal bribery trial. Trudeau kicked her out of caucus this month, following weeks of controversy and damaging submissions to the House justice committee, including the infamous taped call between Wilson-Raybould and Privy Council Clerk Michael Wernick.

Stéphane Dion
Then: Minister of Foreign Affairs
Now: Canadian ambassador to Germany and special envoy to the European Union
What happened: Dion was shuffled from his job in January of 2017, and was reportedly not particularly pleased about this. He was coy about his future moves before accepting the European postings after a noticeable delay of several weeks.

Chrystia Freeland
Then: Minister of International Trade
Now: Minister of Foreign Affairs
What happened: Freeland succeed Dion in January of 2017, and spent much of the next two years working to renegotiate NAFTA with the United States and Mexico.

David Johnston
Then: Governor-General of Canada
Now: Retired from public life
What happened: Johnston completed his term in October of 2017 and was succeed by the current governor-general, former astronaut Julie Payette.

John McCallum
Then: Minister of Immigration, Citizenship and Refugees Minister
Now: Out of public life
What happened: McCallum left Immigration to become Canada’s ambassador to China in 2017. He held that role until resigning in January of this year after repeatedly botching the government’s response to tensions with China over Canada’s arrest of Chinese telecom executive Meng Wanzhou.

Kent Hehr
Then: Minister of Veterans Affairs and Associate Minister of National Defence
Now: Liberal MP
What happened: Hehr was shuffled from Veteran’s Affairs to the Minister of Sport and Persons with Disabilities in August of 2017. Once there, Hehr was forced to apologize after insulting victims of thalidomide contamination. Shortly thereafter, he resigned after allegations of sexual misconduct. He remains a Liberal MP.

(middle row, from left)
Scott Brison
Then: President of the Treasury Board
Now: Out of public life
What happened: Brison resigned from cabinet and government in January of this year, citing a desire to spend more time with family. He quickly took a senior position at the Bank of Montreal.

MaryAnn Mihaychuk
Then: Minister of Employment, Workforce Development and Labour
Now: Liberal MP and Chairwoman of the Standing Committee on Indigenous and Northern Affairs.
What happened: Mihaychuk was shuffled out of cabinet in 2017, a move she described as disappointing.

Catherine McKenna
Then: Minister of the Environment and Climate Change
Now: Unchanged

Mélanie Joly
Then: Minister of Canadian Heritage
Now: Minister of Tourism, Official Languages and La Francophonie
What happened: Joly struggled early in her mandate over the issue of whether to tax Netflix in Canada, and if so, how. After struggling through a series of interviews in her native Quebec, she was demoted in July of 2018.

Dominic LeBlanc
Then: Leader of the Government in the House of Commons
Now: Minister of Intergovernmental Affairs, Northern Affairs and Internal Trade
What happened: LeBlanc has been shuffled twice. After starting as House leader, he became Minister of Fisheries, Oceans and the Canadian Coast Guard in 2016, before being transferred to his current post in 2018.

Jane Philpott
Then: Minister of Health
Now: Independent MP
What happened: Philpott was shuffled twice since 2015, first to Minister of Indigenous Services in August of 2017, and then to President of the Treasury Board in January of 2019. She resigned from that position weeks later in protest of the government’s handling of the SNC-Lavalin affair and, in particular, its treatment of Jody Wilson-Raybould. She was kicked out of the Liberal caucus, along with Wilson-Raybould, by Trudeau, who cited “trust” issues.

(back row, from left)
Carla Qualtrough
Then: Minister of Sport and Persons with Disabilities
Now: Minister of Public Services and Procurement and Accessibility and acting president of the Treasury Board
What happened: Qualtrough was shuffled to Public Services and Procurement in August of 2017, and briefly served as acting president of the Treasury Board in March of this year.

Hunter Tootoo
Then: Minister of Fisheries and Oceans, and Canadian Coast Guard
Now: Independent MP
What happened: Tootoo resigned from cabinet and the Liberal caucus in May of 2016, saying he needed to seek treatment for alcohol treatment. He completed the treatment but did not return to either cabinet or caucus, and eventually confessed to an inappropriate sexual relationship with a female staffer, who reportedly vandalized his office after discovering that Tootoo was also in a sexual relationship with her mother.

Patty Hajdu
Then: Minister for the Status of Women
Now: Minister of Employment, Workforce, and Labour
What happened: Shuffled in January of 2017.

Maryam Monsef
Then: Minister of Democratic Institutions
Now: Minister of International Development
What happened: Tasked with the public consultation process for the government’s ultimately abandoned electoral reform pledge, Monsef was criticized for her performance in that role. She was shuffled to Minister for the Status of Women in 2017 and to her current post earlier this month.

CORRECTION, April 11, 2019: In an earlier version of this story, the photo illustration incorrectly identified Bardish Chagger as being out of cabinet.