Who is Jack Mintz? The name on every politician's lips.

The University of Calgary economist eludes political pigeon-holing. All three parties have received his support, as well as his criticism 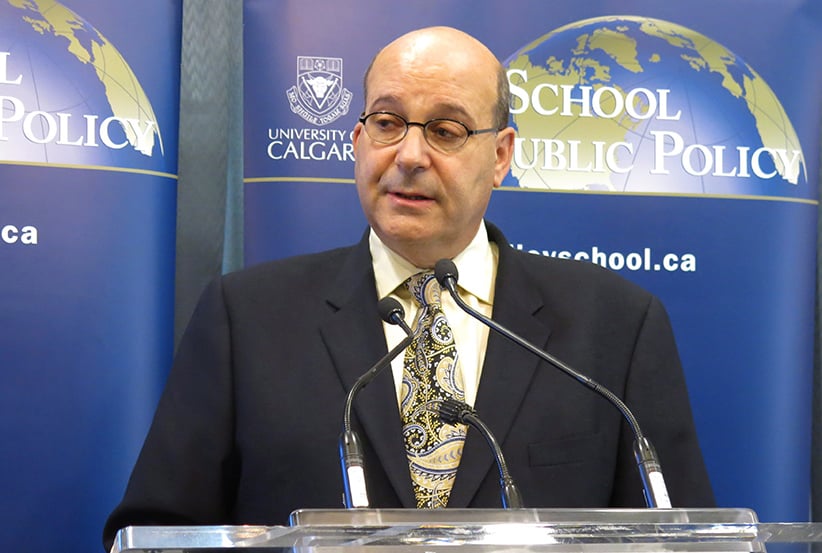 Jack Mintz, of the School of Public Policy at the University of Calgary, speaks to reporters in this photo taken Tuesday, September 24, 2013. Mintz has released a reporter saying Alberta should implement an HST. Bill Graveland/CP

On Tuesday, Jack Mintz was apparently bolstering the Liberal party’s argument about the tax rate for small businesses. On Wednesday, Mintz was being referenced to undermine the NDP’s plans for corporate taxes. Four months ago, the Conservatives were citing Mintz to condemn the Liberal approach to income taxes. That was several months after the Liberals had invoked Mintz to dismiss the Conservative government’s EI hiring credit.

“I’m public. I raise my point of view. And people can do with it whatever they wish,” says Mintz. “If I persuade people of a certain point of view than I feel I’ve had some positive impact.”

Politicians can’t be trusted to settle their policy disagreements and journalists generally have neither the time nor the expertise to parse the finer points of economic policy. Enter Jack Mintz.

In the past nine years, his name has been invoked 103 times in the House of Commons, and another 44 times during committee hearings. A search of the Globe and Mail‘s database returns 453 hits over the last four years.

Mintz is an economist at the University of Calgary. Earlier this year, he was named a member of the Order of Canada “for his contributions as an adviser on fiscal and tax policy at the national and international levels, widely sought after by governments, businesses and non-profit organizations.” He has been a member of the federal government’s economic advisory council since 2008, was named to a federal advisory panel on health care innovation in 2013, chaired the federal government’s technical committee on business taxation in 1996 and 1997, worked at the Finance Department on corporate tax reform in the mid-1980s, was president of the C.D. Howe Institute from 1999 to 2006, and served as director of the University of Calgary’s School of Public Policy from 2008 until earlier this year. He is also currently a regular contributor to the Financial Post.

“He’s the premier public policy economist in Canada,” says Kevin Milligan (full disclosure: Mintz was Milligan’s thesis supervisor). “He is deeply respected in the tax world, in Canada and around the world. I don’t always agree with him, but I always take what he says seriously.”

Mintz’s analysis does allow that “the favourable tax treatment of small businesses provides substantial opportunities for high-income Canadians to avoid paying personal income tax, and to split income among family members,” a view that somewhat lines up with Trudeau’s suggestion that “a large percentage of small businesses are actually just ways for wealthier Canadians to save on their taxes.” (A review by the Canadian Press found other evidence to support Trudeau’s contention.) But Mintz’s proposal that all businesses, regardless of size, be taxed federally at a rate of 13 per cent—effectively a further cut to the corporate tax rate and an increase in the small business tax rate—does not line up with any party’s platform. The Conservatives have cut the corporate rate, but now propose to also cut the rate for small business; the New Democrats would increase the corporate rate and reduce the small business rate; the Liberals have only made vague suggestions of some allowances for small business.

This is the fun of any politician’s decision to invoke Mintz to support their view: chances are he has said or written something else that undermines one of their other positions. He supports some of the Liberal focus on infrastructure investment, but disagrees with the party’s approach to income taxes. He supports the NDP’s commitment to balancing the budget, but disagrees with the proposal to increase corporate taxes. He looks favourably on the Conservative commitment to lower taxes, but criticizes the party’s preference for tax credits. He opposes supply management for the dairy and poultry sector, a policy all three parties support. He has criticized all three parties’ proposals to supplement the Canada Pension Plan.

Last fall there was briefly a dispute between Liberal critic Scott Brison and Employment Minister Jason Kenney as to whether or not Mintz supported the government’s hiring credit. (Mintz’s analysis from the time is here.) Conservatives have used his analysis to criticize carbon-pricing proposals, sidestepping the fact that Mintz has proposed a carbon tax.

“I have always believed that economists should not be afraid to explain economic facts and provide a view on policy. Someone has to discuss economic efficiency and equity. No one else can,” Mintz says. “If the views are mentioned by politicians, that is the politician’s decision.”

The voter is basically better off for Mintz’s public presence, and for the emergence of a number of economists who now regularly contribute analysis and commentary to the policy debate (including Maclean’s contributors Stephen Gordon, Mike Moffatt, Kevin Milligan, Andrew Leach, Jennifer Robson and Paul Boothe). Though as with anything a politician says or cites, one is advised to check and verify. It is also possibly useful to note that economists will sometimes disagree (or be wrong).

Ideally, the involvement of economists would compel politicians to more readily acknowledge basically useful concepts like math, evidence and expertise. But there would still be the matter of public opinion. In a recent survey, 63 per cent favoured reducing small business taxes, 63 per cent supported increasing corporate taxes substantially and 73 per cent favoured increasing incomes taxes on who earn $200,000 or more—all policies Mintz would caution against pursuing.