Between the leaders debates

Paul Wells: Trudeau has been trying to sharpen distinctions between the major parties. O'Toole is trying to blur them. And the consortium debates aren't helping anyone. 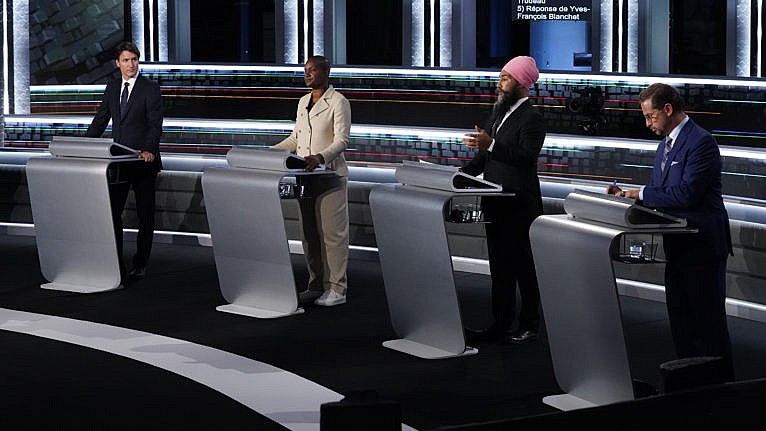 Consensus is only possible when divergent interests line up for mutual benefit. If you watched Wednesday’s French-language national leaders’ debate, you heard from 16 people: five party leaders, five award-winning journalists, half a dozen citizens from other walks of life. That’s a large consensus. I mean, Dune won’t have a bigger cast. Where did everyone’s interest lie?

For starters, the participating news organizations want maximum on-screen time for their journalists. Every organization that participated in the consortium sent a prominent colleague. None preferred to sit the night out, for the sake of simplicity and clarity. That’s how you get five people in moderator/interrogator roles. And if La Presse‘s Paul Journet wasn’t all that interested in pressing leaders on their non-answers to questions from Hélène Buzzetti of the newspaper syndicate Les Coops de l’Info… well, that brings us to the parties’ interest.

The parties want minimum on-screen time for their leaders. Or at least, they want the smallest amount of risk for every second of screen time. How much time did Erin O’Toole want to spend explaining that the only source of cost reduction in his platform is the abolition of Liberal day-care plans, and that in every other way his party has become as spendy as Trudeau’s? Zero. Ideally he would like to spend zero minutes explaining that. In the event he was made to spend perhaps a minute and a half on the touchy topic, compared to a combined total of 70 minutes listening to journalists and ordinary citizens whose names appear on no ballot. That’s a pretty good trade.

READ: English-language debate: What each leader must do

Similarly, Trudeau had to spend only a few minutes trying to explain why he’s campaigning instead of governing. Yves-François Blanchet had to listen for only about 40 seconds in evident distaste while Trudeau explained that Quebecers have a legitimate role in Canada’s federal government. Nobody had to over-extend themselves. It was like Question Period! Who doesn’t love Question Period? Question Period is a mechanism for distributing news clips while avoiding conversation.

This is how good people working hard can produce results that don’t quite meet expectations, again and again. Paul Journet’s the best new columnist at La Presse. Every politician in Ottawa has been nervous about the prospect of a question from Hélène Buzzetti for 22 years. The leaders worked hard too. Just for instance, O’Toole has been doing daily French debate prep for months. And yet… this is what we get.

This knot of convergent interests is so perfect that only higher interest can cut it. This week some colleagues have asked: Why does Quebec get two debates, this week’s and last week’s TVA Face à Face, plus the previous Sunday’s parade of leader interviews on Radio Canada? Why do party leaders leery of giving up control keep showing up for what are often very revealing turns before TV cameras in Quebec? It’s obvious. They’re coaxed out of their comfort zones by a higher interest. Quebec has 78 ridings that are absolutely up for grabs. Since the ’80s, no fewer than four federal parties have taken turns sweeping the province. No other part of Canada can so effectively make or doom electoral dreams.

But Ontario’s close—more seats, a little less fluidity in electoral history, but when Chrétien, Harper and Trudeau were winning they were winning in Ontario. If TVOntario or the resurgent Toronto Star or Ontario Tech University or the Stratford Festival held a debate on Ontario issues and promised to deliver a large Ontario audience, how many leaders would stay away? Same for British Columbia, a distinct society that’s been locked in a three-way electoral race for decades. Or for populations that aren’t defined by geography but by interest: Indigenous Canadians, or the energy sector.

READ: Justin Ling on the French-language debate: There’s a hole in your platform

The consortium debates’ oligarchy isn’t the product of a mandate from heaven, only from Ottawa. And it doesn’t improve the product. One day, people will figure that out.

Meanwhile there’s tonight’s debate. During the perhaps 40 per cent of its running time that will be devoted to leaders talking about their programs, each of the principals has a chance to break this campaign out of an extended deadlock.

Trudeau has been trying to sharpen distinctions between the major parties. It’s why he’s gone through more wedges in a month than a caddy. Vaccine passport, health-care privatization, abortion choice, daycare spaces, assault weapons, the role of loutish protesters in society: Trudeau needs this to be an emotionally hotter campaign in which voters feel a stake. If it’s a distracted or offhand choice, he loses. One day perhaps we’ll learn how it felt for him to realize that.

O’Toole has been trying to blur distinctions. It’s why he hid his platform costing for a month, why he absolutely never appears with anybody who might conceivably become a member of his cabinet—can’t have anyone asking questions about those folks—and why he keeps posting photos of his dog. He’d really rather define an O’Toole government later, once he’s running it. His problem is that he’s come close but he’s nowhere close to sealing the deal. He won’t score by playing more defence.

I have’t addressed the role of the third group in Wednesday’s crowded debate: the ordinary citizens. Bernadette Landry from New Brunswick who was worried about long-term care, and Perry Simon from Kanesatake who wondered about official Indigenous languages, and Charles Leduc who’s 11 and wants to know how the parties will cut carbon emissions. An answer to Charles’s question would have been useful, but instead the leaders took turns fawning over him and bonding with him, and the moderators took turns encouraging him to keep having opinions and questions.

Those ordinary citizens are all of us. We have questions and worries. We’re told this whole five-week exercise is our chance to have a say, but somehow it doesn’t feel like a conversation. It’s frustrating. What was those citizens’ interest in participating? Hope for something better. Even when it’s almost systematically cheated, it persists.