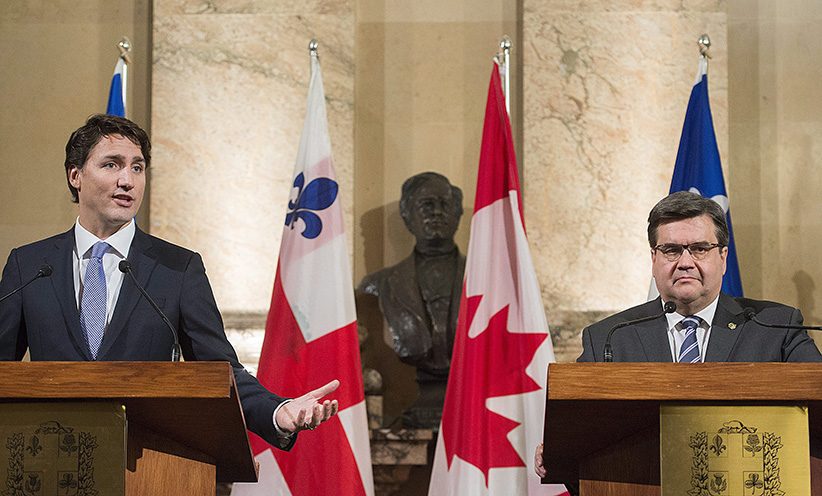 It is not about the pipeline. Don’t be fooled by Montreal Mayor Denis Coderre’s crude rhetoric over the proposed Energy East pipeline. Don’t drown in the tailing ponds of snark pumped out by interim Conservative leader Rona Ambrose when she called the controversy a “national unity crisis” or compared it to Père Trudeau’s original oil sin, the National Energy Program. This is what the French might call the “treachery of images.” What looks like a pipeline on paper, one Coderre already seems to be softening on, is actually a representation of a broken, out of date, leaky federation we call Canada. And Coderre wants to blow it up.

Our federation was designed in 1867 by and for the two big players: the provinces and Ottawa. After 150 years, federal-provincial squabbling has become a pantomime tradition, with stock characters like the “Alienated Westerner,” the “Laurentian Elite” and the “Maligned Maritimer” playing their parts in classics like “Health Care and the 10 Provincial Dwarfs” or “the Wizard of Meech Lake.” But the old stories have lost their relevance since they leave out the new star: cities. “Cities are not treated fairly in federal politics,” says Frank Graves, president of Ekos Research. “Canada is arguably 85 per cent urban, and large cities should be much more equal partners to the senior levels of government.”

Graves’s point is not lost on the Big City Mayors’ Caucus—a group representing the 21 largest cities in Canada. Vancouver Mayor Gregor Robertson has long complained about an “archaic” federation that does not even recognize cities in the Constitution. Cities contribute 72 per cent of GDP, but have no say over services like health care. And yet they are the first to deal with failures of that system. Most cities have only one way to raise revenue: property tax. Outside of direct funds from the federal gas tax, most of their money is filtered through the provinces. “Cities get only eight to 10 cents of every tax dollar collected and the rest goes to the federal and provincial governments,” Edmonton Mayor Don Iveson told me. Iveson is replacing Robertson as head of the mayors’ caucus. “Cities are in charge of 60 per cent of the assets and infrastructure people use and we are in charge of their upkeep, so it’s time cities stopped sitting at the kids’ table.”

Iveson wants cities and First Nations to be included in the Council of the Federation meetings with the federal government, right alongside the provinces, and it’s something he’ll ask for when he leads the mayors’ pre-budget consultation with Finance Minister Bill Morneau in February. “You can’t make real decisions on issues like infrastructure without bringing in the most accountable elected officials: cities.”

Provinces still think nothing has changed. When Denis Coderre announced he and a group of more than 80 Quebec mayors opposed the Energy East pipeline, Saskatchewan Premier Brad Wall scolded him. “This is a sad day for our country when leaders from a province that benefits from being part of Canada can be this parochial about a project that would benefit all of Canada,” Wall wrote on Facebook, explaining how transfer payments from the West go to Quebec. “Is it too much to expect . . . Quebec municipal leaders would respond to this reality with generous support for a pipeline that supports the very sector that has supported them?”

Coderre spoke the unspoken. Big cities are more powerful than most provinces and won’t be pushed around. It is not 1867. The old rules don’t apply. “People in Alberta are furious with Coderre,” Iveson admits. “But this fight is a consequence of mayors not [being] included in key decisions. Suddenly you can get held hostage on a big issue by one mayor who is driving a wedge.” In other words, if nothing changes for cities, things will get worse.

Coderre is about as subtle as a kid who burps the alphabet and thinks it’s a hit single, and his opposition to Energy East might be over the top. He knows 57 per cent of Quebecers oppose the pipeline. But Justin Trudeau met with him on Tuesday and promised tougher environmental processes around pipeline decisions. If the Liberals follow through on that, and Canadians trust that the more than 70,000 km of pipelines in Canada are monitored—something called into question this week by the environmental commissioner—there are still solid reasons to expect Energy East to go ahead. The mayors can legally intervene in the process and undermine the so-called “social licence” needed to build it, but the environment is a federal and provincial matter and pipelines are federally regulated. It’s still old school Canada. But it’s changing fast.

It used to be the West wanted in. They got in. Now the cities want in. This pipeline debate is a proxy for a larger problem in our federation. The city kids grew up and don’t need to borrow the car from Mom and Dad. They have their own. It’s a muscle car. And they’re ready to race the provinces to the future of our country.