Bill Blair has barely left Ottawa all year, his agenda beset by tragedy and a pandemic. Then a national debate on policing revived the former police chief's resume, which his critics will never forget 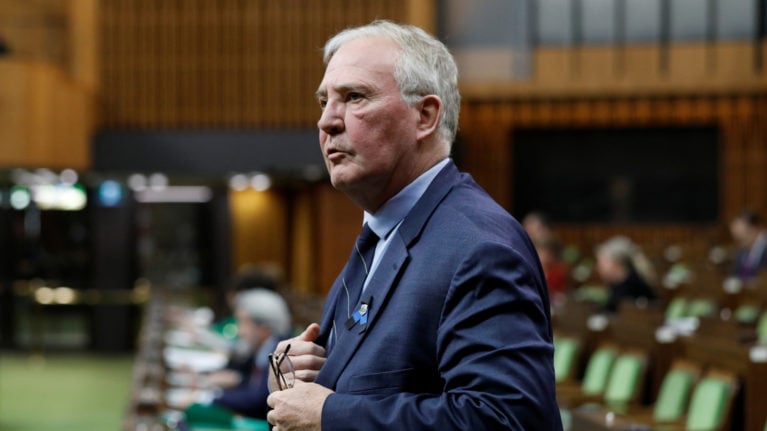 Canada's Minister of Public Safety and Emergency Preparedness Bill Blair speaks during Question Period in the House of Commons on Parliament Hill on April 20, 2020. (Blair Gable/Reuters)

In the middle of the pandemic, Bill Blair worked in a ghost town. The public safety minister’s office just off Parliament Hill, in the typically jam-packed Confederation Building, offered a rare sign of life as most MPs and their staff stayed far away from Ottawa. Blair, who lives in downtown Toronto and represents a riding in his nearby hometown of Scarborough, has barely left the nation’s capital all year.

First, the Flight 752 tragedy, and its complicated aftermath, kept him in town. Then it was rail blockades that divided the nation. When the pandemic hit, the minister responsible for Canada’s newly closed borders and vulnerable prisons hunkered down. Then a mass murder killed 22 Nova Scotians and raised serious questions about the RCMP’s response. Many in that province are wondering how long it’ll take to get to the bottom of what went wrong.

Now, the death of George Floyd south of the border—and an alarming spate of Indigenous deaths involving Mounties north of the border—has thrust a debate about policing onto the national stage—and raised questions about Blair’s own resume as a former top police officer. While Americans are learning about police tactics like “kettling” protesters, Canadians will remember the practice from the brutal crackdown on demonstrators during the G20 summit in Toronto in 2010, which Blair oversaw as Toronto’s chief of police.

Asked about Trudeau’s confidence in Blair at this moment of heightened scrutiny of police behaviour, the Prime Minister’s office stood by their man. “We are incredibly fortunate to have Minister Blair and the work he is doing to keep us all safe,” read a statement. The PM “is proud to have him by his side.”

Amidst all the attention and high-profile priorities, the minister was hoping to make a ban on “assault-style” firearms, the sort typically used by soldiers to kill each other, his signature policy of the first part of the Liberals’ second term. In mid-May, he spoke to Maclean’s about the bold regulatory moves at length, arguing strenuously for gun control that will keep dangerous guns out of the most dangerous hands by eliminating them from gun shops and, he hopes, the black market.

No one, he says, has credibly argued why any Canadian should own a firearm built for military use. And he draws a clear line between gun culture in the U.S. and Canada. “They have a right to bear arms,  predicated on a right to protect themselves from other people. That’s not the law in Canada,” he says. “We don’t carry weapons in Canada for self-protection against our fellow citizens. We rely on the rule of law.” Blair hopes a buyback program, and two years of amnesty, will do the trick. He also wants to beef up the fight against gun-smuggling at the border, and future legislation—once Parliament is sitting more regularly—could take care of all that.

But with so much on Blair’s agenda—fighting floods and fires are also his bailiwick—how can he possibly tackle it all? And how has his performance measured up?

“I’m not a very anxious person,” says Blair, seated on a couch in his office, when he’s asked what keeps him up at night. His portfolio includes oversight of the Mounties, the correctional and parole systems, Canada’s spy service, and the perpetually challenging Canada-U.S. border. At least 70,000 federal employees work under his watch, with budgets in the billions.

His most recent mandate letter, delivered before the pandemic, dropped 21 priorities into his lap. He’s tasked with fighting gang violence, keeping pot away from kids, modernizing a border treaty on irregular crossers, creating a review body for the border agency, coming up with a flood insurance program for homeowners, and there are 16 other jobs, too. His briefing book is bulkier than many. But Blair insists the 24-hour-a-day nature of his job doesn’t shake him. “It doesn’t keep me awake worrying. It keeps me awake working,” he says. “We work on these things late into the night.”

“These things” have added up, and they’re testing Blair’s credibility on sensitive files. He was a police officer for 39 years, and at a time when calls to “defund the police” are gaining traction, the many critics he earned during his decade-long run as Toronto’s top cop aren’t shy about reminding anyone of his record.

Blair has long argued that as chief, he responded substantively to the conduct of police during the G20 protests. A 300-page report by the Office of the Independent Police Review Director, published two years after the G20 incidents, slammed the excessive force used against protesters. Blair implemented the recommendations, but questions about how serious he was about taking responsibility dogged him on the campaign trail in 2015.

As chief, Blair also supported “carding,” a policy that allowed officers to conduct street-checks of suspicious individuals—and, in practice, disproportionately targeted people of colour. He admitted when he was appointed chief that racial profiling did exist on the force—and he wanted to end it. This month, he declined to apologize for carding when given the opportunity by NDP MP Matthew Green, who called it “systematic and racist.”

A few days later, Prime Minister Justin Trudeau acknowledged that systemic racism is woven into Canada’s national institutions, including its police forces. Trudeau made the remarks on the heels of repeated incidents in which Mounties appeared to use unnecessary force against Indigenous people in Nunavut, New Brunswick and Alberta. That province’s deputy RCMP commissioner denied systemic racism played a role in the force’s work. Brenda Lucki, the commissioner, initially waffled on the same question. After Trudeau pulled rank on the issue, both eventually changed their tune.

The credit for Lucki’s about-face has reportedly gone to Blair, who broached the issue during a regularly scheduled conversation with the commissioner after her day-long media tour backfired on the evening news and the next morning’s front pages. A statement from his office backed up his government’s view on the pervasiveness of racism. “Indigenous peoples, Black Canadians and other racialized communities still face systemic barriers in Canada, and that racism is frequently materialized in interactions with law enforcement,” read the statement. “We are working hard to make our systems more just and have taken many steps in the right direction. We also know there is much more work to do.”

As police forces reckon with inner demons, their public image has taken a hit. A mid-June poll by Leger, in collaboration with the Association for Canadian Studies, found that 70 per cent of Canadians “trust police services.” That’s a comfortable majority but, Leger notes, an 11-point drop on the same question in just over a month.

The Mounties’ brand is also struggling in a different way on the east coast, where Nova Scotians who were terrorized by a mass shooter in April have raised considerable doubt about the immediate police response and overnight manhunt that ultimately led to the killer’s death at a gas station. In his interview with Maclean’s, Blair committed to finding answers. “We’ll put the processes in place to make sure that those answers not only are obtained for Canadians, but done in a way which is trustworthy. It’s not an easy thing to do, but that’s my job.”

Blair said his first inclination was to approach the Nova Scotia tragedy as a police chief, but reminds himself constantly that’s not his job. Now, he says, he’s responsible for oversight and added the Prime Minister had agreed on his recommended way forward.

But neither Blair nor his office has so far offered any timeline on the accountability he’ll eventually seek, or details about the processes he has in mind. In a June interview with the National Post, the minister did hint at changes to civilian oversight of the Mounties and voiced support for the collection of race-based data of citizens who are involved in incidents where police use force—but still offered few specific details.

The gun ban, which required no legislation, very clearly struck to the core of Blair’s mission in cabinet to devise policy that could keep people safe. He recited technical minutiae of the sprawling regulations that dozens of public servants shepherded into law. He bobbed and parried around the criticism that he evaded Parliament (he’ll eventually introduce detailed legislation), had no mandate to implement the ban (he said voters made their choice last year), and was punishing lawful gun owners (he insists extensive consultations listened closely to those voices). All that might have been drowned out by unforeseen events, but it’s clear Blair would rather look ahead—and leave the past, mistakes and all, behind.