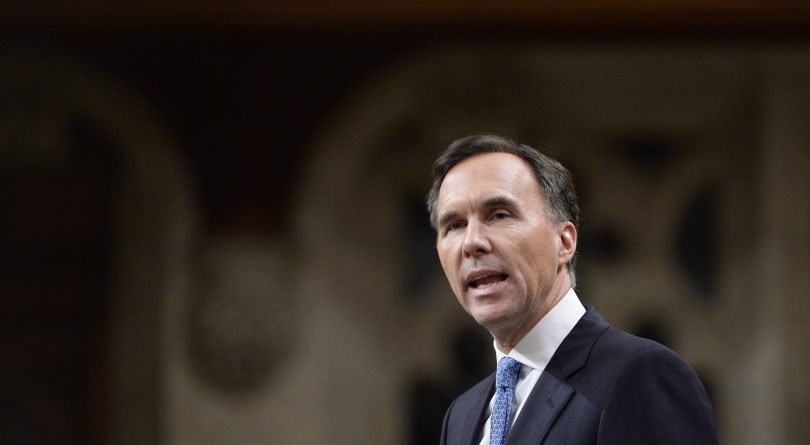 Finance Minister Bill Morneau delivers the fall economic update in the House of Commons, in Ottawa on Wednesday, Nov. 21, 2018. THE CANADIAN PRESS/Adrian Wyld

By now, nobody looks to Bill Morneau for flare as a political communicator. Still, when the moment calls for determined understatement, Justin Trudeau’s finance minister isn’t half bad. Morneau’s annual fall economic update, delivered Nov. 21, was billed as the Liberal government’s response to deep U.S. corporate tax cuts ushered in by Donald Trump, which Canada’s big-business lobby warns put them at a dire disadvantage. Morneau’s comment on having to adjust to the Trump presidency? “This has posed, shall I say, some interesting challenges,” he allowed.

His policy fix was similarly restrained. Morneau didn’t table sweeping tax relief. Instead, he delivered three targeted breaks. Businesses will be allowed to immediately write off the full cost of new manufacturing machinery and equipment, and the cost of certain clean-energy gear, as well as writing off more quickly than before some other new assets. As a result, his officials calculate Canada will retain a clear edge over the U.S. on a key measure of the tax burden on new investments, called the marginal effective tax rate.

READ MORE: Progressive corporate tax reform? It’s not as crazy as it sounds.

Will that be enough, though, to keep Canada in the game as investors eye the Trump-pumped U.S. economy? Not if you buy the Business Council of Canada’s alarming take on what’s at stake, delivered for the BCC in a report from PricewaterhouseCoopers earlier this fall. It estimated that 4.9 per cent of Canada’s GDP—equal to about 635,000 jobs—is “at risk as a result of U.S. tax reform.” But Morneau said simply trying to match Trump’s cuts would cost Ottawa too much in revenues, dangerously inflating the deficit. “Managing the federal budget,” he said in the House, “calls for some tough choices.”

And, anyway, the Trudeau Liberals’ economic-policy instincts don’t lean toward anything as prosaic as cutting taxes. They’ve always been more interested in Ottawa playing a role in the exciting parts of the economy. Thus, Morneau announced another $800 million over five years for the Strategic Innovation Fund, a deep federal cash pool that recently pumped, for instance, $110 million into Toyota’s expansion in southwestern Ontario. Similarly, he earmarked $1.1 billion over the next six years to help Canadian firms break into new markets under something called the Export Diversification Strategy.

Initiatives like these drive free-market true-believers to distraction. They want lower taxes and less regulation, not government innovation and diversification schemes. But Morneau’s update had a little something for them, too. He announced a new External Advisory Committee on Regulatory Competitiveness—responding to business complaints about red tape. As well, ahead of Trudeau’s planned meeting in Montreal with the premiers early next month, Morneau’s statement spelled out where Ottawa hopes to erase trade barriers between provinces, including harmonizing trucking, food safety, and construction regulations—and, naturally, “facilitating greater trade in alcohol.”

RELATED: All the Morneau news that’s fit to ban in China

In pitching all this, and more, Morneau kept circling back to reasons for Canadians to feel upbeat, rather than uneasy, about the economy. Canada’s growth might be slower than in the U.S. this year and likely next, but is still on track for a respectable two per cent of real GDP. Wages are rising above the inflation rate. Unemployment remains close to a 40-year low. Even foreign direct investment—despite fears it would be siphoned off to the hot U.S. market—was up nicely in the first half of 2018. Against this reassuring backdrop, Morneau’s imperturbable manner and unspectacular measures look politically sufficient.

For now, at least. That BCC report, though, warns that capital-intensive sectors of the Canadian economy “likely face a significant shift in investments from Canada to the U.S. over the next 10 years.” It argues the Trump tax cut comes after a decade of already sluggish Canadian investment—and that was when corporate taxes were lower on this side of the border. Similarly, a recent C. D. Howe Institute report highlights how Canadian businesses will invest only $13,900 per worker this year, far behind the $23,200 per worker in the U.S.

It’s all a reminder of an old problem for Canada: persistently lower business spending on everything from machinery to software. It predates Trump’s bombast and Morneau’s reserve. “I don’t view the corporate tax changes by the Trump administration as the be-all and end-all,” Jeremy Kronick, the C. D. Howe Institute’s associate director of research, said in an interview. “Even if we were to match them, many of the same issues that created this lag between Canada and the U.S. would still exist.”

Those issues have been studied from every angle, but remain somewhat mysterious. Is it that Canada’s heavy reliance on natural resources leaves businesses less prone to spend on innovation? Is it bad policy, like those provincial trade barriers and cumbersome regulations? Whatever the mix of causes, Canada has its strengths. Earlier this week, IMD Business School’s annual ranking of how countries do when it comes to fostering and luring high-quality talent put Canada in sixth spot, the only non-European country in the top 10, and well above the U.S. in twelfth. Like the European countries that rank high, Canada benefited from investments in quality of life and public education. Sometimes the best economic policy might not seem to be about the economy at all.