Politics Insider for Aug. 18: The Trudeau-Morneau saga reaches its logical conclusion, New Brunswickers will vote on Sept. 14 and can anyone benefit from the Liberal polling lead? 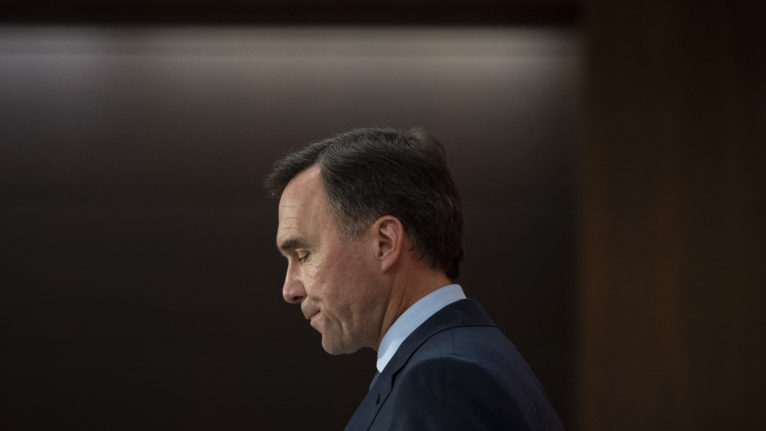 Minister of Finance Bill Morneau announces his resignation during a news conference on Parliament Hill in Ottawa, on Monday, Aug. 17, 2020. (Justin Tang/CP)

Welcome to a sneak peek of the Maclean’s Politics Insider newsletter. Sign up to get it delivered straight to your inbox.”

The Prime Minister’s official itinerary hides all the interesting stuff. The Globe and Mail couldn’t get Justin Trudeau‘s office or Bill Morneau‘s camp to confirm the pair were meeting yesterday to “sort out their differences.” Bloomberg had reported the meeting would happen. But Trudeau’s itinerary only disclosed “private meetings,” shorthand for Stuff We Don’t Want To Tell You. Oh, and a call with Sebastián Piñera, the president of Chile.

But by the end of the day, the finance minister had resigned. At a hastily organized press conference, Morneau confirmed that he met with Trudeau yesterday. He says he told the PM he didn’t intend to run in the next election, and they agreed now is the “right time” for a new finance minister who can think about Canada’s long-term recovery. Morneau characterized their pandemic cooperation, said to be strained, as “necessary, vigorous debate.”

The former FinMin, who also resigned as an MP, insisted he was not asked to resign and that he’d considered this move for a “period of time” he refused to quantify. Trudeau’s own statement, timed to Morneau’s announcement, said nary a negative thing about his former right-hand man: “Bill, you have my deepest gratitude and I know you will continue making great contributions to our country and for Canadians in the years to come.” Morneau says he’ll throw his hat into the ring as the next secretary-general of the Organization for Cooperation and Development. The OECD just so happens to be headquartered in Paris.

That’s their story and they’re sticking to it. But off the record, the leaks were still leaky in the moments before Morneau stepped down. Global News’s David Akin had Liberal sources saying Morneau failed to tell Trudeau’s office about that infamous $41,000 cheque until an hour before he told the rest of the world.

Bill Morneau, melting away: As the Trudeau-Morneau private feud, whatever it really was, played out in public, Paul Wells reflected on what the messy episode said about the PM’s style of governance, his plan for federal finances as Canada enters the next stage of the pandemic, and the people around Trudeau.

Trudeau has spent half a decade at least pretending that Bill Morneau was the incarnation of his government’s fiscal credibility, and the way he is permitting Morneau to be set up suggests he hasn’t given a second’s thought to consequences. And that nobody around him has the wit or the guts to do it for him. Yet again.

So Canada is without a finance minister for the moment, and CBC News broke yet another story about unhappiness at Rideau Hall. This time, the news is Governor General Julie Payette doesn’t appreciate the Mounties sworn to protect her—and even tries to escape their bubble. (When former PM Jean Chrétien ducked away from his own RCMP protectors in Italy way back in 2001, it was a fun story.)

The ever-dwindling Liberal lead: Long gone are the springtime polls in which federal Liberals commanded an enormous lead over their opposition. 338Canada’s Philippe J. Fournier, writing in Maclean’s, has tracked the party’s slow fall back to earth. But Fournier points out that just because Liberals are looking more beatable doesn’t mean there’s an obvious contender who could wrest power after another election.

Bloc leader Yves-François Blanchet announced last week he would pull his party’s support of the government unless the Prime Minister and finance minister both resign. Although it may or may not have been a political bluff, these latest numbers suggest other parties—including the Conservatives—may not feel any rush to push Canadians to the voting booths this fall. Given current party standings, the Bloc and CPC alone cannot make the government fall.

Then again, a new Mainstreet poll for iPolitics gives the Liberals a double-digit lead and a 41-per-cent vote share, which spells majority government. It’s almost as if voters aren’t sure what they want—and are preoccupied with a scary return to school for their kids and a possible second wave of COVID-19.

In less than a month, one of the heroes of the 2014 Ottawa shooting could be the premier of New Brunswick. Kevin Vickers, the provincial Liberal leader currently without a seat who was sergeant-at-arms when Michael Zehaf-Bibeau stormed Centre Block, will attempt to beat the governing Progressive Conservatives in an election on Sept. 14. And it’s all because Vickers didn’t promise to guarantee the sitting premier, Blaine Higgs, that he would support the government until 2022. The PCs will not be going door to door. It’s not clear if a major outbreak could suspend the campaign. And no premier has been re-elected in New Brunswick since Bernard Lord in 2003—just ask former one-termers Shawn Graham, David Alward and Brian Gallant.

Foreign Minister François-Philippe Champagne came out figuratively firing in the direction of Belarus. Champagne’s words were, as far as diplomatic language goes, about as serious as it gets. He condemned a “crackdown on peaceful protestors” after the recent presidential election, which he called “fraudulent.”

What did we expect? On June 30, somebody in the deputy public prosecutor’s office at the Public Prosecution Service of Canada sent Minister David Lametti a briefing note with a redacted title and a hint of “additional information”—namely, that the note had something to do with “Section 13.” That’s the section of the law governing the PPSC’s work that says the director “must inform the attorney general in a timely manner of any prosecution, or intervention that the Director intends to make, that raises important questions of general interest.”

Read the agency’s full three-page response to our access-to-information request. It’s all redacted thanks to solicitor-client privilege, except for one nugget: the note was written by the deputy director for drug, national security and northern prosecution.

Trump masks: They’re real, they’re $15, and they’re “proudly made in the USA.” Of course this president, famously mask-averse in real life, would cash in on market demand. Especially when he can slap his name across millions of Trump-loving faces.