Prime Minister Justin Trudeau and Bill Nye can wax lyrical all they want, but when it comes to truly supporting science, Canada has nothing to crow about. 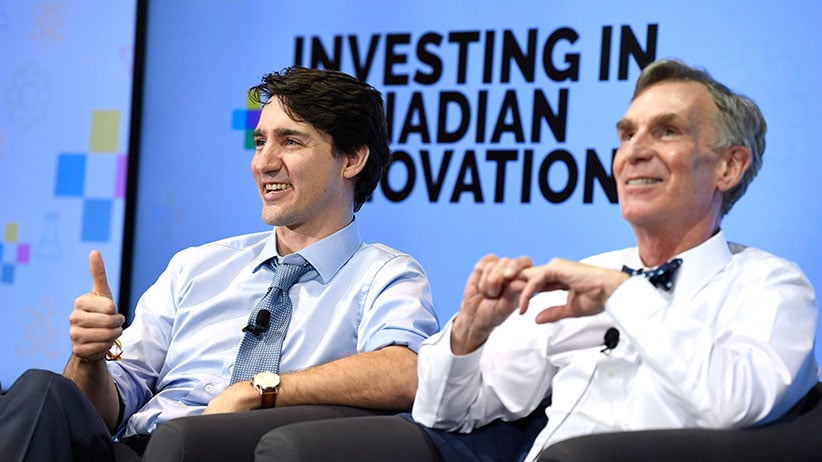 Prime Minister Justin Trudeau participates in an an armchair discussion with Bill Nye, highlighting Budget 2018’s investments in Canadian innovation at the University of Ottawa in Ottawa on Tuesday, March 6, 2018. (THE CANADIAN PRESS/Justin Tang)

“Every single human being starts off as a scientist,” Justin Trudeau told a room full of students at the University of Ottawa on Tuesday morning. “When you’re a baby, you are a scientist.”

Here the Prime Minister imitated the thinking of a baby-as-scientist. “‘If I make this noise, wow, I get milk. If I push this button, or knock this thing off the table, it lands on me and it hurts.’ You’re curious. You’re always asking questions. ‘Why is the sky blue? What does this do? What’s that do? Why is this this way? Well, what do you mean there’s going to be consequences if I do this?'”

It’s been possible, on a few occasions this month, to wish someone had expressed the answer to that last question more forcefully to young Justin, many years ago. But while my Twitter mentions exploded with scorn from readers after I posted the first part of Trudeau’s remark, the make-noise-to-get-milk bit, the PM’s point was, I suspect, not controversial.

“Being a kid is constantly testing, discovering. Hypothesis, experiment, solution, learning. As we get older we start to forget about being scientists,” he said. “And for me, the more we can get young people to realize that asking those questions—and continuing to ask tough questions about how the world works, why the world works this way…— is absolutely essential.”

The occasion for this reverie was a joint appearance between Trudeau and Bill Nye, the courtly bow-tied American science popularizer whose old PBS show Bill Nye The Science Guy helped raise a generation in the mysteries of the natural world. Nye was on hand to help Trudeau spread the word about last week’s federal budget, which did feature large and sustained investments in scientific research. This has won it praise from leading researchers, including Nobel-winning Queen’s University physicist Art McDonald, who wrote that the budget “responded positively… for a healthy research environment.”

News of this bit of show-business drew a fair bit of advance comment, most of it on Twitter on Monday night, some of it critical or worried. Some who don’t like Nye’s climate-change activism said he’s not a scientist. This is, by many definitions, true: He’s a mechanical engineer. I’m here to tell you that it’s hard to get a degree in mechanical engineering without learning some science, but for those inclined to draw distinctions, fill your boots. Others wished a Canadian scientist had been Trudeau’s chosen interlocutor, instead of some TV Yankee.

Part of the answer to that came from the U of O students, who were pleased to see the Prime Minister but plainly way more pleased to see Bill Nye the Science Guy. There simply isn’t a Canadian scientist (or science-friendly mechanical engineer) who would have provoked as much excitement.

My own concern was that Nye, who has been critical of the Trump administration, might attempt to draw distinctions between the blackened anti-science hell-pit of his own country and the bright shiny city on a hill called Canada. Such distinctions would have been misinformed, for reasons I’ll explain in a bit, but in fact Nye mostly managed to avoid making them.

Mostly he and Trudeau just shot the breeze, in ways that were low on detail but not unpleasant.

The babies-are-scientists bit, I heard from a former New Brunswick education minister named Kelly Lamrock, could come from a book that was in vogue at about the time Trudeau was working as a schoolteacher, The Scientist in the Crib. To anyone who’s watched a toddler who was fascinated about dinosaurs grow into a teenager who couldn’t care less, Trudeau’s reverie makes sense as folk wisdom if not as a precise description of the scientific method.

One of the surprises, as the prime minister and the TV science evangelist sat on the metaphorical front porch whittling and chewing tobacco, was how eager Trudeau was to make a case for what’s sometimes called “fundamental science” or “curiosity-based research.”

This is a subject of great interest among scientists themselves. Increases in science funding, during the Harper government and again in Bill Morneau’s 2017 budget a year ago, were usually reserved for research projects whose ends were specified by government. A government-appointed panel said that’s not the way to fund the best science, for reasons I canvassed in this article.

Last week’s Morneau budget allocates most of the new research funding to fundamental science, which came as a relief to the research community. Trudeau’s remarks suggested that part of the reason for that funding breakthrough was that the PM himself is persuaded by some of the arguments researchers like to make about the value of fundamental science.

“One of the conversations that people have had over the last few years has been, ‘Oh, commercialization,” Trudeau said. “Let’s make sure we’re investing in innovation so we’re gonna make money quickly so we can get a return on investment rapidly from science.’ And yes, there’s a lot of things that we can and should be improving in terms of commercialization…. But the fundamental stuff is essential. The stuff you don’t know how you’re going to make money off of it five years from now, 10 years from now, even 20 years from now. But the discovery for discovery’s sake, for building blocks that will eventually lead to new discoveries—and new approaches to solving problems nobody even expected—that fundamental research is essential. And it takes a confident nation, willing to say, ‘You know what? We’re going to invest now in our young researchers who are going to follow their curiosity because we know… 30 years from now that’s going to make a difference.”

With that, two young women researchers were invited onstage. Plainly their role was to be admired as pathbreaking young women researchers, pulverizing glass ceilings, embodying budget initiatives. To my relief, neither seemed interested in acting the part, or at least not in behaving as if sent straight from Central Casting.

Then the PM and the science guy turned to Ayda Elhage, who’s a PhD student in Chemistry at the University of Ottawa. Elhage, who was born in Lebanon, launched into a description of her work, which concentrates on (among other things) the tunable photocatalytic activity of palladium-decorated titanium dioxide. I’m sure I don’t have to tell you how important this work is! At least I hope I don’t, because I understood almost none of it! I think it’s about complex new materials whose properties can be triggered by light. Or not. Anyway, the way she resisted any attempt to reduce her work to a gimmick or gadget was heartening to hear.

There was a moment of drama at the end when Nye asked Trudeau to defend “that pipeline, Morgan Kinder.” But mostly I’ve given you the highlights of the show. Fortunately there were only a few moments when Nye held Canada up as a beacon in a dark world. “I look, really, to Canada,” he said at one point, “for passion, artistic thinking, respect for the environment, and, uh, diversity.”

Further treading down this path would have been uncomfortable, for the truth is that even now, today, in the second of the dark Trump years, the United States is far more of a performer in science research than Canada is. The U.S. National Institutes of Health have about 6 or 7 times the per-capita budget of the Canadian Institutes of Health Research; NASA and the National Science Foundation together spend about twice as much per capita as Canada’s Natural Science and Engineering Research Council.

The new investments in last week’s budget, while welcome, won’t change the orders of magnitude here. The U.S. commitment to science research is cultural and durable. The Trump White House’s call for cuts to granting agencies was met with budget increases to those agencies from Congress. Trudeau’s conversion to the cause comes after almost a year’s steady pressure from the Canadian research community. But I bet those researchers were heartened to hear Trudeau talking like one of them so soon after the budget came down.