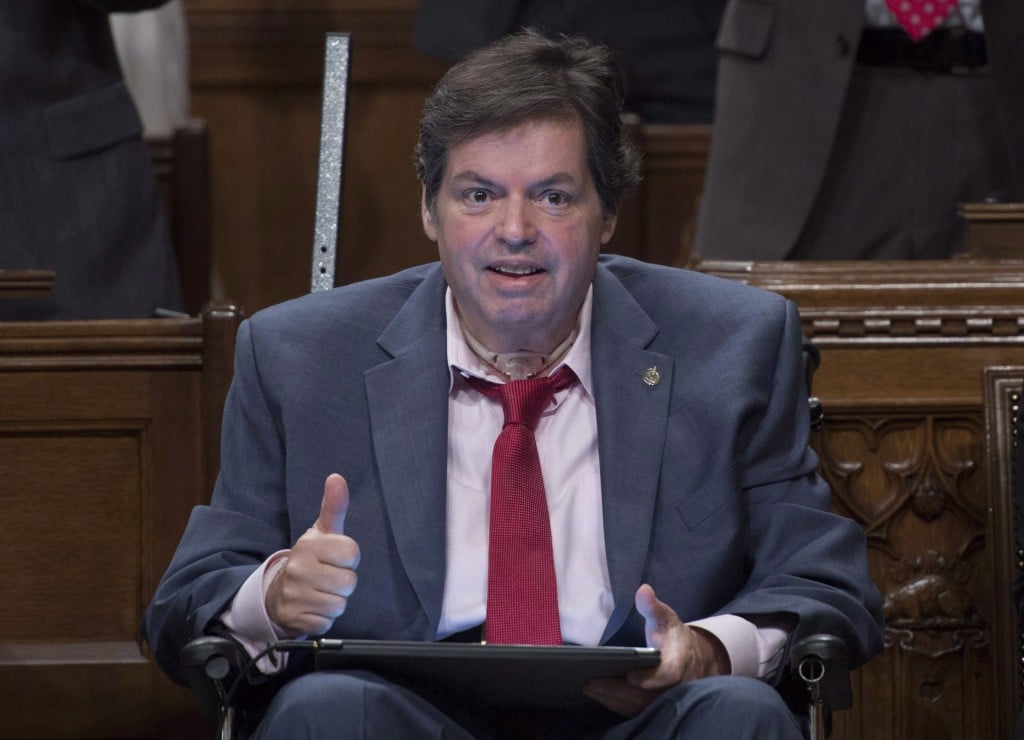 Ottawa-Vanier MP Mauril Belanger, who lives with ALS (also known as Lou Gherig’s disease) gives the thumbs up as he receives applause after using a tablet with text-to-speech program to defend his proposed changes to neutralize gender in the lyrics to “O Canada” in the House of Commons on Parliament Hill in Ottawa on Friday, May 6, 2016. THE CANADIAN PRESS/Adrian Wyld

OTTAWA – Liberal MP Mauril Belanger, stripped of the power of speech and much of his mobility by an implacable disease, watched Friday as his political legacy cleared a last hurdle towards passage by the House of Commons.

Belanger’s private member’s bill, which would render the words of O Canada gender-neutral, is on the verge of adoption by the House, needing only a formal recorded vote next week.

The outcome of that vote is a foregone conclusion because both the majority Liberals and the NDP support the measure, while the Conservatives, who oppose the bill, have run out of political tactics to slow it.

He sat half-slumped in his seat during the last minutes of the debate on Friday, with fellow MPs patting his shoulder in encouragement. He tried to flip a feeble thumbs-up as the voice voted echoed loudly in favour of the legislation.

The bill, which would change the second line of the anthem from “true patriot love, in all thy sons command” to “in all of us command,” has been a Belanger cause for years.

Its passage took on far greater urgency in recent months as his physical condition eroded with terrifying speed.

Belanger ran and easily won election for a seventh time in October, but found he was having difficulty speaking during the final weeks of the long campaign. He went public with his condition at the end of November, saying he would drop out of the race to be Speaker of the Commons, a position he had long coveted.

Belanger’s disease is a particularly aggressive version of ALS.

By January, when he introduced his bill, he had lost his ability to speak, and so needed a voice generator to convert text into computerized speech – the first use of such technology in the Commons.

In March, he was named honorary Speaker. He shuffled down the corridors of the Centre Block using a walker. He had to be helped into the chair. He presided using a tablet and, at one point, mopped tears from his eyes.

In early May, he used the iPad again to open second reading of his bill. He seemed noticeably thinner. His collar was loose to accommodate a tube inserted in his throat to help him breathe and keep his lungs clear of fluid.

For third reading, he sat silently. He had to show up for that debate because the Conservatives had earlier blocked a move to switch the bill’s sponsorship to Liberal whip Andrew Leslie.

The Conservatives earlier talked out a second-reading debate, delaying a quick vote.

They oppose the bill because they say important pieces of the national heritage shouldn’t be trifled with. If they are changed, it should be with broad consent of Canadians, they argue.

“Our symbols, like the national anthem, belong to Canadians, they do not belong to us as politicians,” Conservative MP Peter Van Loan said Friday.

“We may have a role to play to lead discussions, but these symbols are not our playthings.”

Belanger has said his bill would actually return the anthem closer to the original “thou dost in us command” – wording that was changed to “all thy sons” in 1913, presumably to honour men in the armed forces at the approach of the First World War.

Since then, Belanger said, women have won the right to vote, to run for office and to die in combat as members of the military and the anthem should not slight half the population.

The Conservatives tried to resurrect “thou dost in us command” in the 2010 speech from the throne, only to face strong public opposition. They dropped the idea.

With the bill set for almost certain passage next week, it’s unclear whether Belanger will be able to return for the vote. But it seems his legacy is secure.