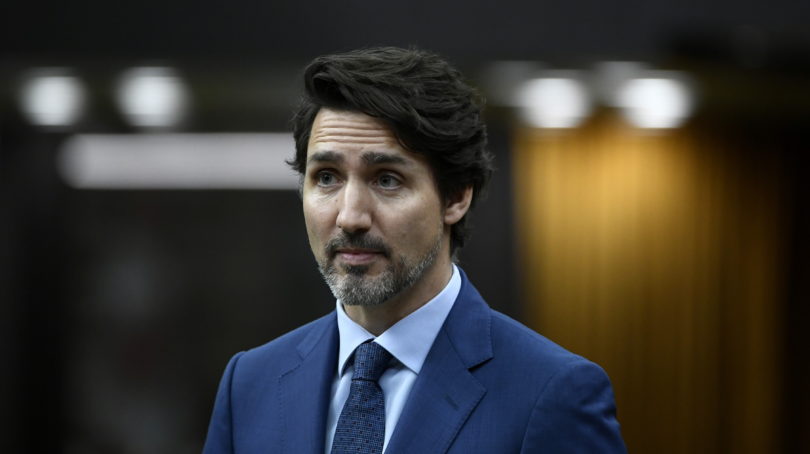 Prime Minister Justin Trudeau rises in the House of Commons on Parliament Hill in Ottawa, as Parliament was recalled for the consideration of measures related to the COVID-19 pandemic, on Saturday, April 11, 2020. THE CANADIAN PRESS/Justin Tang

CERB appeal. Whether he will say so or not, Justin Trudeau appears to be bowing to leftward pressure by expanding the Canada Emergency Response Benefit (CERB). The expansion eases restrictions around who receives money, allowing seasonal workers, those who’ve run out of Employment Insurance and anyone making less than $1,000 a month (due to COVID-related reduced hours) to claim the $2,000-a-month benefit. This should help part-time employees, students and anyone who was otherwise banking on summer employment in a few months. (Catch up on the full transcript of Trudeau’s speech from yesterday.)

This comes off as a particular win for NDP Leader Jagmeet Singh, who has been calling for the CERB to be flat-out universal. Trudeau’s expansion doesn’t go that far, but it does fill some gaps for people who need it. “Thank you to everyone who shared their stories to help us fight for these changes,” Singh told the media. “Still, too many people are falling though the cracks. We will keep fighting so that everyone gets the help they need.”

Taking care of long-term care. As part of what we might call CERB+, Trudeau also announced extra money for anyone earning less than $2,500 a month working in a long-term care home, given the dangerous and essential nature of their jobs. Several provinces are moving in a similar direction, including Quebec and Ontario. Premier Doug Ford also wants to boost salaries for those employees, while restricting them from working at more than one facility. (British Columbia did that weeks ago, and Alberta announced the same strategy already.) Premier François Legault is calling on volunteers who can help short-staffed homes care for their patients. (Watch Ford’s full press conference here.)

In a related investigation, CBC News found that the government of Ontario drastically cut back on the number of random inspections of long-term care facilities last year, visiting just nine out of 626 homes. (They performed around 2,800 critical-incident inspections, which are reactive, as opposed to random check-ins, which are proactive.) From 2015-2017, most homes in Ontario received random inspections. Critics of Ford’s Conservative government are linking this to the high number of coronavirus-related deaths in those facilities, but the fact that long-term care homes are struggling beyond Ontario speaks to how inconclusive that correlation may be.

Cutting through the red tape. One cabinet minister to emerge especially favourably from this pandemic has been Foreign Affairs Minister François-Philippe Champagne, who tells The Globe and Mail he’s become “the travel agent of Canada” in trying to bring home Canadians abroad. That means he’s been texting international diplomats via WhatsApp and haggling flight fares for Canadians directly with airline CEOs.

Another cabinet member worth keeping eyes on in the coming year will be Federal Infrastructure Minister Catherine McKenna, who’s currently seeking “shovel-ready” projects the government can invest billions of dollars in after the pandemic cools down. She says she’s been studying America’s 1930s New Deal and personally asking former Canadian politico bigwigs like John Baird, Mark Carney and Kevin Page for advice.

The end of growth. Many are eagerly discussing how the world will revive its economy over the next two years. But what if it doesn’t? Since 2000, and especially after the 2008 recession, growth levels have never climbed as high as analysts hoped. We may soon have to face the reality that we are in a post-growth era, writes Sarmishta Subramanian in Maclean’s:

A pandemic-triggered recession will require unprecedented policy responses to protect citizens. Supporting a recovery is one thing, but resurrecting a system that prioritizes the pursuit of runaway growth is quite another. If billions of dollars in bailouts didn’t send growth skyrocketing post-2008, it’s fair to ask if that’s an achievable goal this time around, once the economy stabilizes. It’s also hard to ignore the disparate voices asking if it even should be. What exactly have years of artificially boosted growth meant for citizens in an era defined by precarious work, soaring inequality and stagnant wages? Is higher growth worth reviving at any cost?

Certainly the Canadian economy isn’t growing right now—but neither is it still shrinking, per se. Yesterday, Bank of Canada governor Stephen Poloz announced Canada would maintain its key interest rate at 0.25 per cent, holding it steady instead of further dropping it to zero or even negative interest, as some predicted.

Thanks, but no thanks. Yesterday, U.S. President Donald Trump claimed the Canadian border “will be one of the early borders to be released,” saying both countries were handling the outbreak well. Except that the U.S. has nearly three times as many cases per capita as does Canada, and Trudeau announced earlier this week that the border will remain closed for much longer while returning travellers are forced to have a “credible quarantine plan.”

Not that Trump has ever played by anything but his own rules. After announcing he would cut funding to the World Health Organization for 60 days due to what he saw as secretive dealings with the Chinese government, Conservative Leader Andrew Scheer echoed that skepticism yesterday afternoon, pointing out mixed messaging that arguably delayed Canada’s response. “We’ve got serious concerns about the accuracy of the information coming out of the WHO and it’s incumbent upon this government to explain why they have based so many of their decisions on the WHO,” Scheer said.

The Star followed up by asking several experts how Canada might handle the WHO situation; the consensus was that a review was worthwhile, and China’s pressure not insignificant, but pulling funding outright was a bad idea that would disproportionately affect poorer nations.

Despite the data, following the American example so closely might not be the best decision for Scheer. As Sergio Marchi writes in Maclean’s, the entire American empire is on its way down.

America’s continued decline would represent a giant tectonic shift in the current world order. It will create huge and dangerous voids that will require our urgent attention, just as other geo-political earthquakes did, including the implosion of the Soviet Union, the fall of the Berlin Wall, the expansion of NATO, the extension of the European community, the rise of China, 9-11, the 2008 financial crisis, Brexit, and now a global pandemic. More than any other nation, our close friendship and geographical proximity makes Canada particularly vulnerable.

Don’t let the haters bring you down. Finally, remember that our collective actions are indeed working, and the fact that we aren’t seeing greater numbers of deaths is proof of that. But the doubters will only see the results, and not understand the alternatives, as Max Fawcett writes in Maclean’s. This creates a dangerous catch-22 that risks the fabric of our society: if nothing goes wrong, why bother trying to stop more bad things from happening? Doesn’t the status quo work just fine?