Why Terry Fox cannot be bought 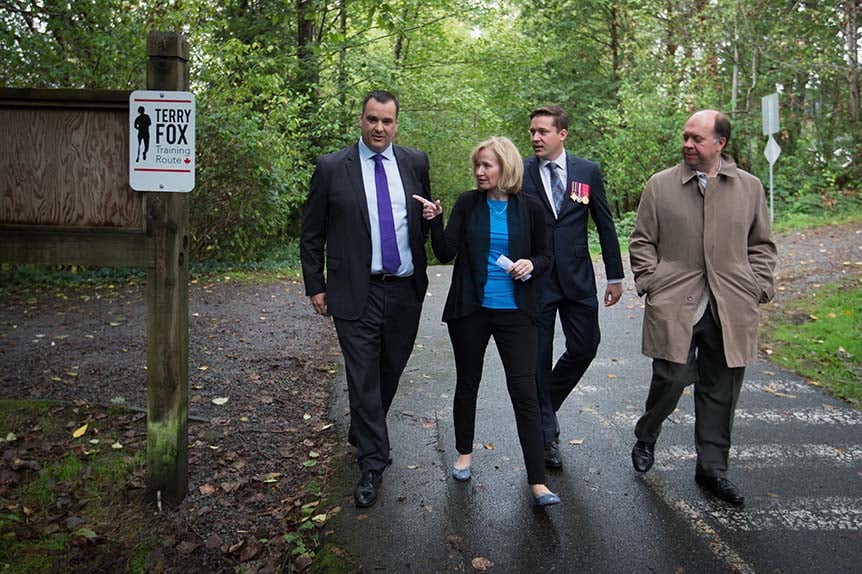 The thing to know about Terry Fox, the thing the election-focused Conservative government failed to grasp, is this: He would not be branded. He was the original “no logo” man,  two decades before author Naomi Klein’s treatise on globalization and brand bullying. There were no corporate logos on his T-shirts, or his battered pair of grey shorts. He even fretted over the adidas trademark three stripes on his blue, Orion-style running shoes.

To be sure, he had corporate support on his 1980 cross-country Marathon of Hope, including the Four Seasons hotel chain. But hotel founder Isadore Sharp, who had lost a teenage son to cancer, remained a largely silent partner, picking other corporate pockets for donations behind the scenes. The Four Seasons logo was nowhere to be seen. He knew what former Tory cabinet minister James Moore, and Laureen Harper, wife of Stephen, failed to appreciate with their $35-million election pledge on Sunday: Terry Fox—his legacy, his family, his foundation—cannot be bought.

Related: The people who brought Terry Fox’s story to the Heritage Minutes

Harper, Tim Laidler, the Tory candidate in Port Moody–Westwood–Port Coquitlam, and Moore, who is not running for re-election, chose Sunday, the day of the annual Terry Fox Run and the 35th anniversary of the Marathon of Hope, to announce in Port Moody, B.C., that a Conservative government, if re-elected, would use taxpayer dollars to match run-related donations up to $35 million. Asked about the reaction of the Fox family, who was not in attendance, Moore said: “They are aware of it . . . They’re enthusiastic and they think it’s great.” Not true. Behind the scenes, the Fox family was stunned and angered by the announcement, as was family friend Bill Vigars, the former Canadian Cancer Society rainmaker and fundraiser for the Ontario leg of Fox’s run.

“That’s basically what upset me about this whole thing,” Vigars told Maclean’s. “The political parties are no different than Pepsi and Coca-Cola. In 35 years, not one single individual, organization or corporation has ever dared go there. They just knew what Terry was like. That was Terry. Everyone over the years completely respected that.”

From the archives: Ken MacQueen on covering Terry’s Marathon of Hope in 1980

Perhaps it was understandable, from a Conservative mindset. Who says no to $35 million? Just two days earlier, the party had appropriated another Canadian icon, when Wayne Gretzky gave a ringing endorsement of Prime Minister Harper at a partisan event in Toronto. But Gretzky, a U.S. resident who is not eligible to vote in Canada, had long since made the transition from professional hockey player to professional brand ambassador. Fox, who would die of cancer in 1981, was a different sort of hero. “There’s no comparison between the two,” Vigars said. “The Fox family themselves, for 35 years, kept the brand clean, for lack of a better phrase. They’ve followed Terry’s wishes to be never commercialized, and to be open and equal to every single Canadian.”

Despite the lack of corporatization—and, more likely, because of that lack—the international non-profit Terry Fox Foundation has raised $750 million for cancer research in the 35 years since the run began. Vigars admits he was so upset, especially by the condition the funds were contingent on a Conservative re-election, that he was up at 4 a.m. writing an angry response he intended to post on Facebook. “My wife said, ‘Why don’t you sit on that for a couple of hours?’ ” He took her advice, cooled off slightly, and posted a more moderate response. It reads, in part: “There is no place in the fight against cancer for politics. This is poor taste, bad timing and so wrong on so many levels. Also, to say the family was enthusiastic is incorrect, to say the least.”

The Fox family—father Rolly, and Terry’s siblings Fred, Darrell and Judi Fox—also issued a statement Monday. It reads, in part: “We need to clarify that we did not respond enthusiastically suggesting the idea was great, as MP James Moore reported in yesterday’s Conservative announcement . . . Our son and brother ran across the country in 1980 in an effort to unite a nation for a common cause. We are committed to furthering his dream by reaching out to all Canadians regardless of their political interest.” (The full statement is reprinted below.)

The Conservatives attempted to back out of the controversy with a statement issued by party spokeswoman Meagan Murdoch. She noted the foundation had written to all party leaders “about their comprehensive cancer program. It was mistakenly assumed that the family was supportive of the funding requested and welcomed by the Terry Fox Foundation. We regret any confusion this may have caused.” In Moncton, N.B., on Tuesday, NDP Leader Tom Mulcair weighed in on the controversy, saying Harper should apologize. “For the Conservatives to have been playing crass politics without the permission of the family or the foundation, I think it speaks for itself of what they’re willing to do,” he said. Of course, during an election campaign, even a promise not to play politics is political.

Most of the thousands of participants and volunteers who participated in non-competitive Fox runs across the country and in other parts of the world were unaware of the drama. Typical was the run in North Vancouver, where a couple of hundred people, most of them far too young to have followed Fox’s journey, gathered in the teeming rain to run and walk past soccer fields, a salmon river, through forest and mud puddles. In exchange for having their pockets picked for a donation, or not, they received a participation ribbon and, if they chose, a donated coffee and a piece of fruit. Who the donors were, most participants would never know. There were no logos in sight.

The Fox family statement in full:

“Our son and brother ran across the country in 1980 in an effort to unite a nation for a common cause. We are committed to furthering his dream by reaching out to all Canadians, regardless of their political interests. We would always welcome government support of cancer research in Terry’s name. Specifically, we would hope that all federal parties would come together in this the 35th-anniversary year, for Terry and all who run in his name, in support of the Terry Fox Research Institute’s proposal for a pan-Canadian comprehensive cancer centre strategy. We need to clarify that we did not respond enthusiastically suggesting the idea was great, as MP James Moore reported in yesterday’s Conservative announcement promising to match the Terry Fox Foundation’s fundraising efforts this year up to $35 million. We will continue to make no public comments with respect to any federal party promises during the election campaign, unless it is a unified, all-party announcement.”