Brazeau looks to hold someone to account for spending allegations 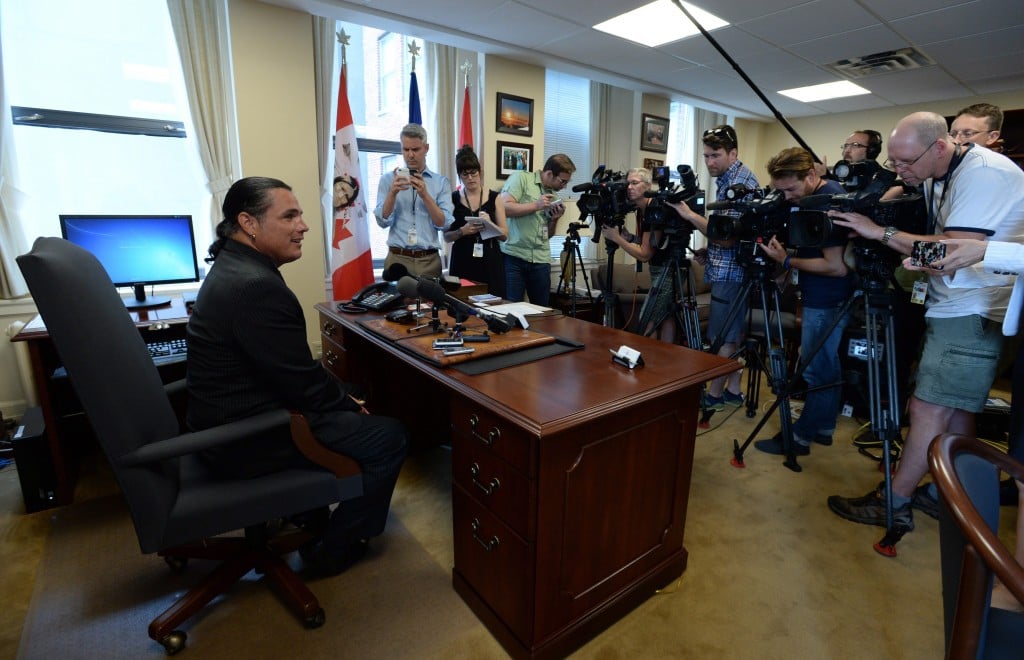 Senator Patrick Brazeau speaks to media as he returns to his Senate office in Ottawa on Thursday, July 14, 2016. THE CANADIAN PRESS/Sean Kilpatrick

OTTAWA – Spending in the upper chamber still needs to be cleaned up, Sen. Patrick Brazeau said Thursday as he promised to push for more changes when he makes his triumphant return to the Senate in the fall.

Brazeau said someone has to be held accountable for the fact that he has spent the last three years of his life under what he describes as false allegations of misspending and wrongdoing.

Brazeau summoned the media to his Ottawa office Thursday and spoke out publicly at a news conference for the first time since his long, difficult legal saga began more than three years ago.

Brazeau has long insisted he did nothing wrong when he filed housing claims for a secondary home near Parliament Hill, noting he met the test the Senate now uses for verifying a primary residence.

Independent auditors from Deloitte couldn’t conclude he broke any rules because the rules themselves were so vague, he added. But the Senate rejected that finding and ordered Brazeau to repay about $49,000 in housing claims.

Months later, in November 2013, Brazeau was suspended without pay in an emotional vote in the upper chamber. Some Conservative senators abstained, believing it unfair to treat Brazeau the same as fellow members Pamela Wallin and Mike Duffy.

Brazeau said he wants the whole thing to be “water under the bridge,” but knows that may be impossible.

“What happened in the Senate with me in particular … was unjust and somebody needs to be held accountable,” he said.

“And I’m going to work darn hard to make sure that place gets cleaned up, because each time you hear senators saying, ‘Oh, well, we changed these rules and we changed those rules’ – well, they haven’t done enough and I’m going to start working on that right away.”

The rule changes, a key pressure point in the Senate, are at the heart of a dispute between one senator and the Senate committee that oversees spending. The committee has threatened to cut off Sen. John Wallace’s expense privileges if he doesn’t sign a declaration saying he is in compliance with Senate rules.

The declaration is nothing new for members of the upper chamber who have to sign similar forms for the Senate ethics officer and at the bottom of claims submitted to Senate finance.

Wallace, an independent senator from New Brunswick, doesn’t want to reinforce the power of the Senate’s internal economy committee and its three-member executive to judge the legitimacy of spending by their peers. He wants to see an independent oversight body that would review claims free from partisan interests.

Like Wallace, Brazeau will sit as an independent. Brazeau said he’s willing to work with anybody in the upper chamber, vowing to shed the partisanship cloak he wore for years as a member of the Conservative caucus until he was booted out in February 2013.

That caucus lost another senator Thursday as Doug Black became the latest to declare he would sit as an independent. Black was appointed to the Senate after being selected in a provincial nomination election.

Thursday was Brazeau’s first full day as a member of the Senate in full standing after the Crown withdrew criminal charges of fraud and breach of trust against him, saying there was no reasonable prospect of a conviction.

It was just the latest evidence that the Senate expense scandal, once the talk of the town in political Ottawa and the bane of the former Conservative government, is in its death throes.

It all began in April with Duffy’s sensational courtroom acquittal, which was quickly followed by the withdrawal of charges against former senator Mac Harb. RCMP investigators later decided against charging Wallin over her travel spending.

Brazeau spoke out about the physical and emotional hardships he faced over the last three years, including addiction, therapy, a cancer scare and multiple attempts to take his own life, including one in January.

Through it all, he said, he never contemplated quitting the Senate.

“It wasn’t the first time that I tried to commit suicide, but that was more a consequence of the last three years – the suspension, the false accusations – but to quit, no, I’m just glad I’m still here.”

He had little to say about Stephen Harper, who appointed Brazeau to the Senate in 2009, other than noting the former prime minister need no longer fear having to testify in court about the Senate scandal.

Brazeau said he was looking forward to Prime Minister Justin Trudeau, his former boxing foe, filling 19 vacant seats in the Senate this fall with independent senators to upend the Conservative majority in the upper chamber.

As for a rematch of their high-profile boxing match from 2012: “I’m always ready, but I don’t believe it will happen.”