Brian Mulroney talks NAFTA as only he can 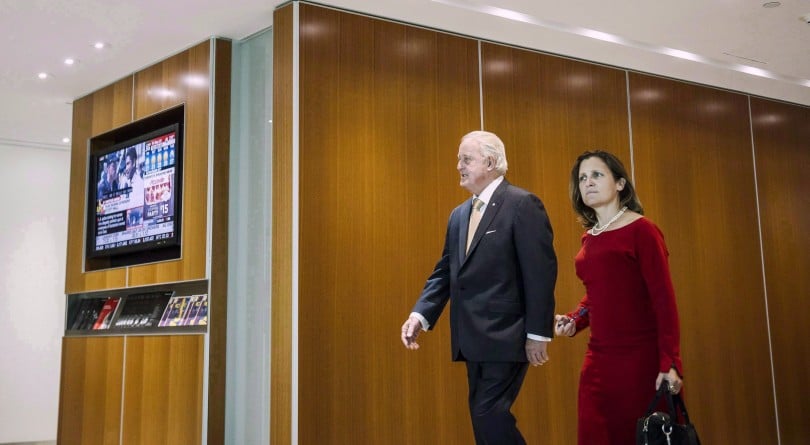 Brian Mulroney’s words have a way of hanging in the air, and not just because that bass-baritone resonates down through the foundations of buildings to bedrock. So, with the NAFTA negotiations in Washington temporarily halted, and Foreign Affairs Minister Chrystia Freeland declaring that she needs to brief Prime Minister Justin Trudeau face-to-face on the state of the talks, it’s worth mulling over what Mulroney had to say yesterday.

Answering questions from the general public and then reporters after being interviewed on stage at the National Library and Archives, the former prime minister made at least three key NAFTA-related points. Keep in mind that a key part of his legacy—as the PM who signed the North American Free Trade Agreement back in 1992 with Mexico’s Carlos Salinas de Gotari and the U.S.’s George H. W. Bush—hangs in the balance.

And Mulroney isn’t entirely on the sidelines. The Tory icon of free trade was called in early to brief the Liberal cabinet on the NAFTA renegotiations foisted on Canada and Mexico by U.S. President Donald Trump. And Mulroney mentioned yesterday that he recently spoke for an hour by phone with Trudeau. In short, he seems to be in the loop.

Making the case for a dairy concession

On the necessity of Trudeau and Foreign Minister Chrystia Freeland giving up something significant on U.S. dairy exports into the tightly controlled Canadian market for supply-managed farm products, Mulroney was emphatic:

“You can’t isolate a variable in a negotiation of this importance and say, ‘I’m going to allow this to hold up the entire thing’, You just can’t do it. Mr. Trudeau and his colleagues will weigh it all and if they come to the judgement that this is in the national interest, they’ll go ahead with it.”

Mulroney also noted that Trump ran on helping Wisconsin farmers, “and it’s stuck to him and he’s stuck with it.” The upshot? “If we don’t find a way to accommodate some of that, then we’re not going to have a deal.”

Urging Tories not to slam Trudeau on NAFTA

Conservative Leader Andrew Scheer has been careful to support Trudeau in broad terms on the NAFTA renegotiation. But his party, including foreign affairs critic Erin O’Toole, has been increasingly critical lately of the Liberals’ negotiating strategy. Mulroney leaned against that shift, noting that he dealt with reasonable U.S. presidents like Ronald Reagan, the first Bush, and Bill Clinton, whereas Trudeau must contend with Trump:

“Reagan, Bush, Clinton—these were a little different from what’s going on now. So I had it easier than Justin does. But I find that the government, in a complex situation, is representing Canada well, and Canadians should know that. And I’m very, very happy with the sustained support provided by the Conservative party, led now by Andrew Scheer. Very important that the Americans see a united front coming from Canada.”

Ever since Trump announced his bilateral NAFTA deal with Mexico, and asserted his willingness to cut Canada out, Trudeau and Freeland have appeared to be in a weakened negotiating position. But Mulroney sided emphatically with trade experts who question whether Trump’s negotiating authority from Congress would allow him to press ahead with his threat to cut Canada adrift:

“Consider the alternatives [to coming to a deal with Canada]. If there’s no NAFTA, how will he get it through Congress? The Trade Promotion Act only authorized a trilateral deal. If he goes to Congress with a bilateral arrangement with Mexico, he’s got problems. Real problems. And doesn’t need any more problems, I don’t think.”

And Mulroney, who always emphasizes the personal dimension of any prime minister-president relationship, said there’s still potential for amity between Trudeau and Trump. “I think they’ve had a very rough patch, but Mr. Trudeau is a very charming young man and he’ll make a pretty good case for himself.”