Politics Insider for March 18: Trudeau shuffles his cabinet—again, the budget versus SNC-Lavalin and Singh's got a numbers problem 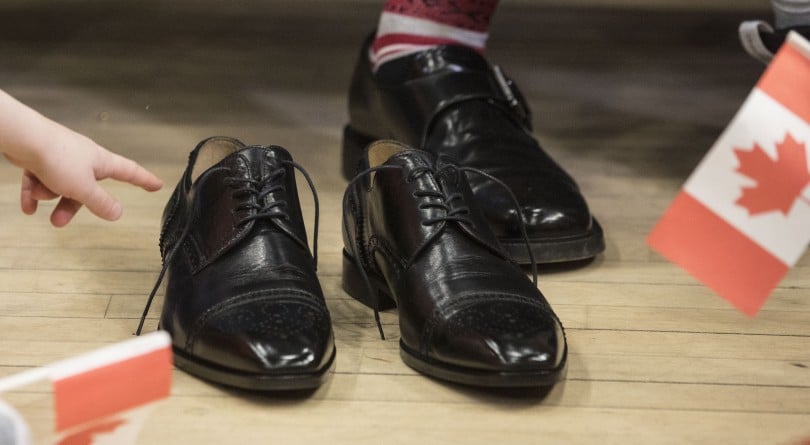 A child points to the new budget shoes being put on by Federal Finance Minister Bill Morneau in a pre-budget photo opportunity in Toronto on Thursday, March 14, 2019. Morneau visited the Toronto and Kiwanis Boys and Girls Club for the media event. THE CANADIAN PRESS/Chris Young

In a week that the Liberals would much rather be talking about pre-election budget goodies, the SNC-Lavalin saga looks set to overshadow events once again.

Talk to my lawyer: With a federal ethics investigation into the SNC-Lavalin controversy underway, as well as the potential for an RCMP probe, Prime Minister Justin Trudeau and several key members of the PMO have lawyered up. Trudeau, along with his advisors Katie Telford,  Mathieu Bouchard and Elder Marques have hired outside legal counsel to advise them on the case. (Globe and Mail)

Meanwhile, Trudeau’s former top advisor Gerald Butts remains out of work, which doesn’t sit right with Andrew MacDougall. Why, he asks, should Butts be the only one to go?:

If there’s one thing most Canadians can get behind, it’s that nobody should ever lose their job over a silly misunderstanding. We believe in fairness much too much to let such an injustice pass.

That’s why it’s time for Trudeau to pick a lane on SNC. Either nobody did anything wrong, or everybody did something wrong. It’s either everybody involved gets fired, or Gerry Butts gets re-hired. (Maclean’s)

A budget to save the housing market: With home prices starting to tumble the Trudeau government will use its pre-election budget on Tuesday to encourage Canadians to buy more houses. It’s not clear exactly what housing measures the budget will contain, but citing a government source, Canadian Press reports Finance Minister Bill Morneau will target issues related to real estate “supply, demand and regulation”.  (Canadian Press)

Budget smudget, more about SNC: Tomorrow isn’t just budget day though, and the Conservatives are doing their darndest to remind Canadians of that. The justice committee will meet behind closed doors tomorrow morning to debate whether to allow former attorney general Jody Wilson-Raybould to testify a second time. A Conservative threat to delay the release of the budget if the Liberals block Wilson-Raybould’s return was itself blocked by procedural maneuvering by the Liberals. (CBC News)

Déjà Vu: For the third time in three months Trudeau will shuffle his cabinet today to replace Jane Philpott as Treasury Board president, after she resigned from cabinet two weeks ago. Among the names being bandied about: Public Services and Procurement Minister Carla Qualtrough and Joyce Murray, who currently serves as parliamentary secretary to the president of the Treasury Board. (CBC News)

Christchurch: In the wake of the terror attacks on two mosques in New Zealand, political party leaders from around the world denounced the massacre and expressed support for the victims. Not so Maxime Bernier, leader of the People’s Party of Canada. Why? “As a rule I don’t comment on these horrible tragedies in other countries. Period,” he tweeted, apparently oblivious to his own lengthy tweet history of condemning terror attacks when the perpetrators are Muslim. Stephen Maher examines why Bernier can’t bring himself to speak out against the Christchurch attacks:

Since Bernier rarely spoke about immigration issues before launching his party, he looks like a callow opportunist, seeking to peel off some of [Conservative Leader Andrew] Scheer’s voters by giving them messages that Scheer cannot deliver without alienating multicultural suburban voters. (Maclean’s)

After Andrew Scheer‘s initial statement about the attack was criticized for not mentioning the victims were Muslim, he issued a longer statement on Friday, and then visited a mosque in his hometown of Regina to meet with religious leaders. (Facebook, Twitter)

Singh in the House: Today is NDP Leader Jagmeet Singh’s first day in the House. After being sworn in Sunday, he thanked his supporters: “Any time you achieve anything, there are so many people that made it possible. You never do it alone.” However Singh’s problem going into this fall’s election is he’s more alone than almost any other federal leader in history when it comes to incumbent support. At least 32 per cent of NDP incumbents have said they won’t run again, far higher than the average of 12 per cent for federal parties going back to the 1940s. Only Kim Campbell’s doomed re-election campaign in 1993 had less incumbent support. (CBC News, Global News)

The Liberals, meanwhile, lost another incumbent over the weekend. Don Rusnak, the first Indigenous MP to represent the riding of Thunder Bay-Rainy River, said he won’t be running again this fall, citing “family commitments”.  As some have noted, his statement was noticeably absent of any mention of gratitude towards Trudeau, let alone even mentioning the prime minister’s name. (Twitter)

If you didn’t catch the weekend political shows, here’s what you missed: