Budget 2021: Here's how Liberals are paying for all that spending

The long-awaited federal budget outlines a strong recovery and rising revenues. But it all comes at a very steep price: $142 billion in new spending over the next five years, and accumulated deficits of $686 billion. 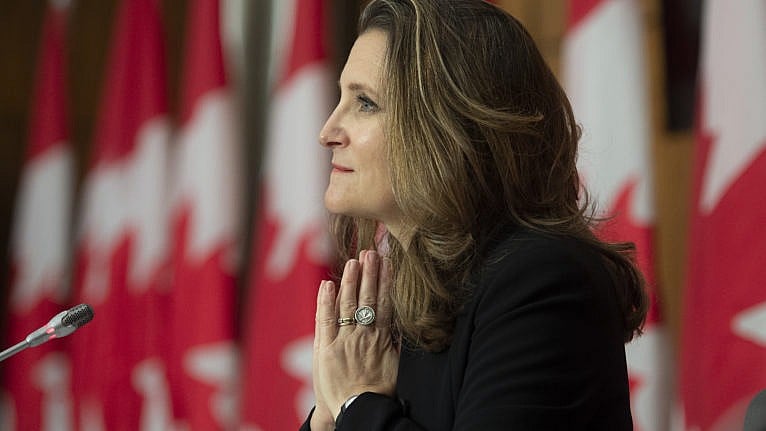 The last budget Bill Morneau ever delivered, just months before the 2019 election, contained $22.8 billion in proposed new spending—and a mere $4 billion that would be doled out that year. Morneau had no plan to balance the budget, and the deficit was projected to balloon to nearly $20 billion. Conservatives griped that Liberals had turned their 2015 promise to eliminate deficits into a joke. Liberals bet big on voters turning a blind eye to red ink. Now, as Finance minister Chrystia Freeland drops her first budget plan, the scale of those spats feels almost quaint. This year’s sprawling tome is packed with $142 billion in new spending over the next five years, and accumulated deficits of $686 billion in that span.

Morneau’s gamble allowed the Liberals to cling to power. No one really knows when voters will next head to the polls—that speculation changes by the day—but many of them will inevitably ask Freeland and her boss, Prime Minister Justin Trudeau, pointed questions about all of that red ink: How do Liberals intend to pay for billions upon billions in recovery spending? And can they really afford to dig such a deep hole?

Freeland’s speech acknowledged the enormity of what she was proposing for child care, long-term care, recovery benefits and dozens of other line items. In fact, she almost boasted about her government’s boldness. “In today’s low interest rate environment, not only can we afford these investments, it would be short-sighted of us not to make them,” she told the House of Commons. In the prepared remarks, “can” and “not” were bolded for effect.

Erin O’Toole, the Tory leader who might only get one shot to dethrone Trudeau, will insist the deficits are too unwieldy, federal debt will grow unsustainably and the only way to pay for everything is to create new taxes that pickpocket hard-working people who are still struggling against a deadly third wave of the pandemic (which he’ll say is all Trudeau’s fault).

O’Toole might co-opt the myriad fiscal and economic charts in Budget 2021 to bolster his case, but the government’s newest projections on revenue have impressively outpaced the estimates in last fall’s fiscal update. Anyone wondering how the feds can open the taps so liberally need only look in a mirror for the answer. We’re collectively sending billions to Ottawa it never expected to receive.

Last year, the Department of Finance expected to collect $1.3 trillion in personal income tax before the end of the 2025-26 fiscal year. A stronger-than-expected recovery added $46.3 billion to that haul in this budget’s projections. The Canada Revenue Agency can expect another $33 billion in corporate income tax over that period, too. The feds are also expecting to collect more GST and benefit from stronger crown corporation performance. That unanticipated revenue, combined with readjusted CERB projections, cuts $35.4 billion out of the 2020-21 deficit. That’s about 10 per cent of what’s now a $354-billion hole.

Finance officials revised revenue projections all the way until 2025-26—and it all added up to $92 billion in tax revenue they weren’t planning for five months ago.

Freeland is also proposing a spate of new taxes. A digital services tax on tech giants could bring in $3.4 billion over five years. A luxury tax on pricey boats and private airplanes could add another $600 million in that timeframe. Another tax on vacant, foreign-owned real estate adds up to $700 million in four years. The feds also plan to go after excessive tax deductions, tax evaders and tax avoiders. All told, the Liberal plan for a “tax system that promotes fairness” is projected to beef up the balance sheet by $8.3 billion before 2026.

Freeland will also emphasize, using the same rhetoric as her predecessor in his fiscal “snapshot” last July and her fiscal update later in the year, that low interest rates are allowing the government to take on billions in new debt that is still cheaper than the government’s comparatively modest pre-pandemic debt load.

The department is acknowledging, though, that interest rates will eventually rise, and debt-servicing costs along with them. The feds are also shifting their borrowing strategy substantially from short-term bonds—two, three or five years—to long-term issuances. And that includes $4 billion worth of “ultra-long” 50-year bonds, issued for the first time in several years. Last year, 71 per cent of bond issuances were of the short-term variety. Next year, that share drops to 56 per cent as the feds lock in low interest rates and push repayment down the road. (Just before the pandemic hit last year, then-U.S. treasury secretary Steven Mnuchin signalled waning investor interest in 50-year bonds.)

Trudeau first pitched temporary deficits in the summer of 2015. Four years later, having scrapped a plan to do away with red ink, he won a second term. His finance minister still has no path back to the promised land of debt reduction. If enough voters shaken by the pandemic and buoyed by relief programs have genuinely stopped prioritizing fiscal restraint over ambitious policy, the Liberals might romp to victory at their next opportunity. But it might be their biggest gamble yet.