Budget 2021: The Liberal path out of the pandemic and back to work

In the Liberals' optimistic budget, recovery is coming. It will take extensions of key pandemic programs, plus childcare, job training, student grants and business supports. 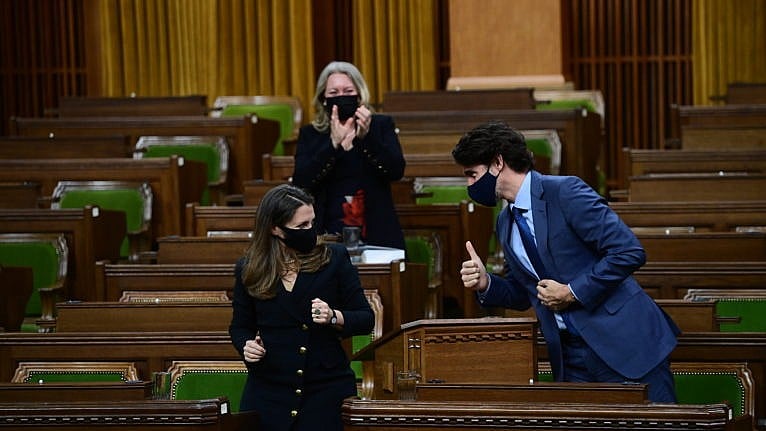 Trudeau gives Freeland the thumbs up after she delivered the federal budget in the House of Commons on April 19, 2021 (CP/Sean Kilpatrick)

A modern Liberal budget is typically replete with self-congratulatory blurbs that describe how an appropriately diverse cross-section of Canadians, with bolded first names like Sam and Natasha, are flourishing because of the federal government’s policies.

In the 2021 document released Monday, those blurbs are fewer and farther between. And they look a little different: Maria has been out of work. Dorothy and Stan had to shut down their storefront. Tim wishes he knew how to get started with e-commerce; his business has been suffering. But because of Liberal decisions, the document assures us, they’re going to be able to get by. (And, implicitly, they would’ve been worse off had certain others been in charge.)

Despite the predictable smugness, there is plenty acknowledgement of the pandemic’s uneven economic impact—”the bitter harvest millions of Canadians have reaped,” as put in Finance Minister Chrystia Freeland’s foreword. But there is also a sense of optimism—even a sense of certainty—that we’ll be out of the woods by this fall, and that the reopening of the economy will provide an opportunity to address the inequities laid bare during the crisis.

In the short term, the budget proposes renewing or extending a slate of existing supports.

The Canada Emergency Wage Subsidy, which has already provided $73 billion to businesses, would be extended beyond June until the end of September, costing about $10.1 billion. Starting in July, the subsidy rate would gradually decrease, “in order to ensure an orderly phase-out of the program as vaccinations are completed and the economy reopens.” From June until November, a new “Canada Recovery Hiring Program” would apply to employers that continue to see lower revenues than they did before the pandemic. The subsidy would offset the costs of reopening, including the cost of hiring more staff. (Employers—like Dorothy and Stan, by the way—wouldn’t be able to claim both benefits at once.)

The Canada Emergency Rent Subsidy and Lockdown Support would be extended in much the same way, with the rate of subsidy starting to decrease at the beginning of July and the last payouts coming at the end of September. This would cost $1.9 billion.

Under the budget plan, income supports would also continue for people out of work. The Canada Recovery Benefit will be available for an additional 12 weeks, through to the end of September. For the first four weeks, the benefit would be a weekly $500; then it would be downgraded to $300/week for the remaining eight weeks. The Canada Recovery Caregiving Benefit would be extended an additional four weeks at $500/week. All of this would cost about $2.5 billion, allocated over two years.

The government says it will seek legislative authority to extend all of the programs through November, in case its timeline turns out to be too optimistic by a couple of months.

It’s in their vision for what comes after that that we begin to see what the Liberals have meant by their promise to “build back better.”

The headline policy is a move towards a Canada-wide early learning and child care plan, something this government has long promised and that has only gotten more urgent during a pandemic that saw women disproportionately leaving the workforce. (Read our coverage of that here.) Another headliner is a $15 federal minimum wage proposal, which would affect some 26,000 workers in the federally-regulated private sector who currently make less than that. But there are other significant investments meant to mitigate the disproportionate effect of the pandemic on other groups, especially young people and racialized Canadians.

For students, the government would extend the interest waiver on loans until March 2023; it would increase the threshold for repayment assistance; and it would lower the cap on loan payments to 10 per cent, rather than 20 per cent of household income. Canada Student Grants would continue to be doubled until the end of July 2023. Adult learners who go back to school would have their grant top-ups extended, too. There’s also increased funding for the Student Work Placement Program, the Youth Employment and Skills Strategy, the Canada Summer Jobs program and non-profit organization Mitacs.

Another major tranche of spending focuses on training and recruitment. A new “Sectoral Workforce Solutions Program” would deliver training to an estimated 90,000 workers in “sectors where employers are looking for skilled workers,” including health, clean energy and construction. Forty per cent of the workers would be from underrepresented groups, the budget document says, including women, persons with disabilities and Indigenous people. The program would cost $960 million over three years.

Two more new programs—an “Apprenticeship Service,” a “Skills for Success” program —would connect apprentices to employers and fund literacy and numeracy training, respectively. A third, the “Community Workforce Development Program,” would deliver funding to “high potential growth organizations” through calls for proposals, helping them to train and hire workers. There are incentives here, too, for hiring from underrepresented groups.

For low-income earners, Liberals are proposing that the Canada Workers Benefit be extended to support about one million additional Canadians. They also propose allowing secondary earners to exclude up to $14,000 of their working income when income-testing for the benefit as a household. (That’s what would help Maria, per the blurb.) These changes would, the budget says, provide $8.9 billion in supports over six years, then $1.7 billion per year on an ongoing basis.

With 3.3 million Canadians accessing employment insurance since last fall, the Liberals are also proposing an overhaul of the system to make it “more accessible and simple,” including simplifying benefits for people with multiple jobs and allowing claimants to receive benefits sooner. It proposes spending $3.9 billion over three years to accomplish a list of changes, plus another $5 million over two years to launch a consultation on longer-term reforms and $99.9 million over three years to add benefits for seasonal workers. The feds also plan to make good on a pledge to increase EI sick leave benefits from 15 to 26 weeks. The budget allocates $3 billion over the next five years for that purpose, then $967 million per year ongoing. The change would only take effect next summer.

Getting whiplash yet? We aren’t done. For small and medium-sized enterprises, the budget proposes the “Canadian Digital Adoption Program,” which would help businesses with e-commerce, through micro-grants and support from a network of 28,000 young Canadians who would be trained and hired to provide help. (That’s for Tim.) A second stream for “off-main street” businesses, like manufacturers, would receive advice on technology planning and financing. The program would cost $4 billion over four years.

It is difficult to imagine the rollout of all of these policies, and the magnitude of all of that money, when the finance department officials who worked on the budget, and the reporters who are writing about it, are all stuck in their living rooms. (Let alone the wide breadth of other measures that the very long document proposes.)

As they try to sell this budget—this catalogue for what Canadians can expect if they elect another Liberal government—Freeland and her colleagues will need to find a way to project the document’s own optimistic tone about our path to the other side. Even while much of the country is locked down, they must try to convince the in-the-flesh Tims and Marias of the world that this is almost over. They may find a willing audience.