Childcare for an average of $10 a day within five years? The budget's big offering is ambitious and essential, say experts. It will also be an enormous job to pull off. 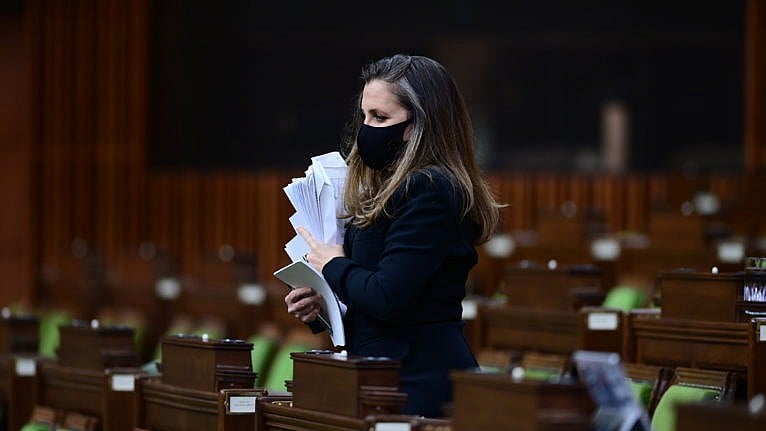 Freeland arrives to deliver the federal budget in the House of Commons on April 19, 2021 (CP/Sean Kilpatrick)

The federal government is putting big money on the table—with yet-to-be-determined strings attached—to establish a Canada-wide child care system that it paints as being both a defining legacy project and an essential public service whose economic urgency the pandemic has proven.

“After 50 years of talking about it and fighting for it, we’re finally going to get it done,” Finance Minister Chrystia Freeland told reporters shortly before she tabled the 724-page doorstop of an economic roadmap in the House of Commons on Monday.

In the context of a budget that attempted to look beyond the current conflagration of COVID-19 variant cases and economic carnage, one of the core arguments advanced by the budget and by Freeland herself is that hefty spending on child care is critical to the government’s plans for economic growth.

The price tag on this attempt at generational social transformation is $30 billion over the next five years, which scales up from $3 billion in newly announced funding for 2021-22 to $8.3 billion in 2025-26 in permanent funding. Combined with previously announced spending, the budget touts “a minimum of $9.2 billion per year ongoing” in a budget that features $142 billion in new spending over the next five years. By the end of the five-year timeframe offered on child care in this budget, the federal government says it will be contributing half of child care costs for the provinces and territories, which administer those programs.

The budget described this undertaking as being “on a scale with the work of previous generations of Canadians, who built a public school system and public health care,” adding, “This is a legacy investment for today’s children who will not only benefit from, but also inherit this system.”

But the government pre-emptively warns that this won’t come together overnight. In her prepared remarks to the House, Freeland underlined this: “This is not an effort that will deliver instant gratification. We are building something that, of necessity, must be constructed collaboratively, and for the long-term.”

READ: Shipwrecks and yacht taxes: 10 things you might have missed in the federal budget

To that end, the budget offers two yardsticks the government says it will use to measure its success. The first is that Canadian parents will pay an average of $10 a day for child care within the next five years; the second commitment is to cut in half the average fees for regulated child care programs by the end of 2022. With so many of the details attached to this massive tranche of funding still to be worked out, those two specific pledges should provide a clear test of the government’s success or failure in the next few years.

Both of those standards will apply everywhere except Quebec, which gets lavish praise in the budget as “a pioneer” for its established daycare program. As the government works out bilateral agreements with the provinces and territories that will be attached to this funding, the budget says it will pursue an “asymmetrical” agreement with Quebec that will allow “further improvements to their system, which the people of Quebec are rightly proud of.”

With those agreements yet to be ironed out—and that complicated federal-provincial dance is often where things have gone awry in countless attempts over the decades to make a national child care plan work—the budget offers hints about the criteria the federal government will press for.

Among them is working with the provinces and territories to “support primarily not-for-profit sector child care providers” to increase spaces and offer more affordable rates; ensuring childcare workers have opportunities for professional development and that their work is valued—the budget notes that they are almost entirely women, with a median income of less than $20 an hour—and building an accountability system that will provide apples-to-apples, publicly-available data to measure progress.

“The federal government will authorize the transfer of 2021-22 funding as soon as bilateral agreements are reached with the provinces and territories,” the budget says by way of dangling an intergovernmental carrot.

The big bucket of $30 billion in childcare and early learning spending includes $29.2 million over two years to help some 400 child care centres be more accessible for children with disabilities, $2.5 billion over five years to increase and improve Indigenous early learning and child care programs and facilities and $34.5 million over five years and $3.5 million ongoing to shore up the Federal Secretariat on Early Learning and Child Care and a new National Advisory Council.

“To further support a lasting federal commitment over time, the government is committed to tabling federal early learning and childcare legislation in fall 2021—following consultations with stakeholders, provincial, territorial, and Indigenous partners—to enshrine the principles of a Canada-wide child care system in law,” the budget pledges.

Jennifer Robson, an associate professor of political management at Carleton University who specializes in household finances and public policy, said in advance of the budget being unveiled that the biggest indicator of the government making a serious attempt at childcare would be the amount of money on offer and whether it was permanent. Those requirements were generously satisfied on Monday, but she also cautioned in advance that Canada’s jurisdictional entanglements are not easily resolved.

“It doesn’t matter in a sense how many dollars the feds put on the table, they are not constitutionally in charge of the regulation of child care in Canada,” she says. “A real downside is that it risks provoking an inter-jurisdictional dispute where the feds are trying to make the money conditional on certain kinds of policy directions and the provinces are saying ‘Screw you, this is my area, just hand over the money, please.'”

That is where the distinction between a “national childcare system” and a serious federal investment in childcare becomes useful to contemplating whether Canada can finally get this done, Robson said—and indeed, the latter is exactly how Budget 2021 bills this effort.

Morna Ballantyne, executive director of Child Care Now and a member of the Expert Panel on Early Learning and Child Care that has been advising the government for the last 18 months, believes the pandemic has laid bare the paradox of childcare in Canada: it is an essential service, but it has not been funded, organized and managed as such.

“We have governments to do what as individuals we can’t do. And as individuals, as much as we tried—I know personally I spent years on boards of directors, cobbling together fundraising, trying to sell raffle tickets to keep the sector going—it is not doable, it’s not sustainable,” she says. “Only governments can do this.”

Barry Forer, a research methodologist and statistician at the Human Early Learning Partnership (HELP) at the University of British Columbia and another member of the expert panel, said in advance of Monday that he is as hopeful as he’s ever been that the project of an ambitious Canadian child care program will finally come together.

“I do think crises come and go, so I think this is our shot. If we waited another year or two, I wouldn’t be as hopeful,” he says. “We have the right government, the right economic conditions, including low interest rates, and the right crisis to point out the importance of adding early learning and child care to the other social goods that everybody accepts as being important to invest in, like health care or education.”