But does Michael Ignatieff love the United States enough?

Were his latest comments a gaffe, a moment of honesty or an awkward segue? 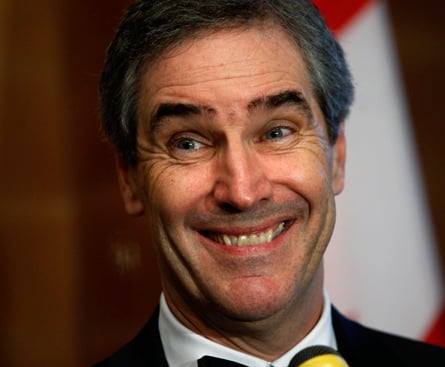 Okay, so earlier today, while some of us were trying to pay attention to the NDP pre-game show, the Tory Talking Point Brigade was busily sending around the following exchange between Michael Ignatieff and a New Brunswick reporter, which apparently took place following his speech in Saint John earlier today:

Hon. Michael Ignatieff:                   Nobody is a bigger fan of the United States than I am.  I sometimes paid a political price for my affection for the United States.  I’m making an export market point and I’m making a geo-strategic point.  I think that as we go through the 21st century, India and China, Brazil, those are three key markets which are going to grow.‬

Well, hang on a sec, ITQ thought to herself.

When you read the quote in context — which, to its credit, the TTPB did provide — it seems more likely that the wording of the question caused any number of disastrous potential headlines, both foreign and domestic, to flash before his eyes:

‘IGNATIEFF TO OBAMA: I THINK IT’S TIME WE STARTED SEEING OTHER COUNTRIES’

With that in mind, before he starts to reiterate his view that China, India and Brazil are the future, as far as trade potential, he gets out a line about how he’s a big fan of the US too — none bigger! It’s sort of like damage control, except this being Ignatieff off the cuff, there’s always a fifty fifty chance that he’ll get himself in more trouble than he was actually in to begin with.

Was it necessary? Probably not — honestly, it doesn’t sound like the reporter was accusing him of having given up on our southern neighbour. But as far as ITQ can see, this isn’t really that outrageous a statement, although you’d think that by now some sort of instinct would have started to kick in that would stop him from just handing this sort of ammunition to his opponents — especially after the whole Just Visiting campaign, not to mention our still shadowy friends over at Republicans for Ignatieff, who must be pinching themselves in gleeful disbelief.

Anyway, after a few back-and-forths with a Conservative acquaintance on whether such an admission should disqualify the man from running for political office in Canada, she decided to throw it over to the comments so that those of you who aren’t transfixed by the twitternanigans on #hfx09 can have something to debate.

Was this a gaffe? A moment of unintentional, and unfortunate, honesty? Or just an awkward segue?

FILED UNDER: has the campaign started already and we missed the writ drop? ignatieff says stuff! at least he didn't bring up iraq or puffins! he's getting better!