If you take what Gérald Tremblay said at its face, he was one of the most gobsmackingly naive fools ever to wander Montreal

He can’t say he wasn’t warned. And I’m not even talking about our cover from three years ago this week: 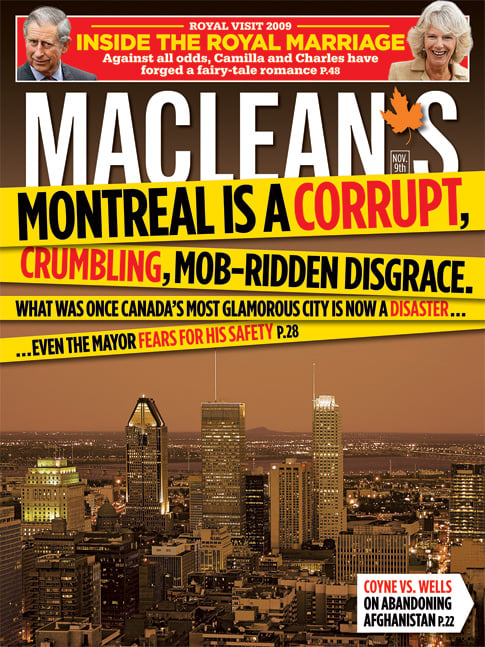 “My father told me politics was dirty and it would destroy me,” Montreal mayor Gérald Tremblay said near the start of his resignation speech at City Hall tonight. Let us assume he had a decent relationship with Dad. You’d think he would have taken some care to ensure that politics would not be dirty near him so it would not destroy him. But no, apparently that was too much to ask.

It’s as if Dad had said, “Son, don’t walk under movers lifting pianos because sometimes those ropes aren’t tied securely,” and pianos had been landing on him for a decade, and finally he woke up, climbed out from under the shattered rubble of a hundred Steinways, and said, “Guess I shoulda listened.”

Yes. You really should have listened.

I get the impression that even reporters who’ve followed the Montreal municipal cesspool for years will be amazed if it is ever established, as it has not yet been for sure, that Tremblay himself was crooked. He is basically a nice guy. But if you take what he said tonight at its face he was one of the most gobsmackingly naive fools ever to wander the crumbling boulevards of Canada’s second metropolis. Casablanca would have been a different movie if Captain Renault, who pronounces himself “shocked to find that gambling is going on here” were actually shocked to find there was gambling. Instead of being a conniver, he would have been a weapons-grade dunce. That other, parallel-universe movie would have to be called Montreal.

For a handy wrap-up of everything that was going pear-shaped while Tremblay was congratulating himself on his fine administration, we turn to Colleague Patriquin’s friend Patrick Lagacé at La Presse:

From the transgression of his Number 2 (Frank Zampino, who fraternized in the tropics with Tony Accurso, co-recipient of the largest public contract in the history of the city) to the escapades of Faubourg Contrecoeur (which led to the arrest of Mr. Zampino and Mr. Fillion, his former Chief of Staff) to the municipal auditor’s spying to the 3% demanded by Bernard Trépanier, his party’s bagman (a story that came out in La Presse a few years ago, before coming out at the Charbonneau Commission) …

La dee dah, it’s such a lovely town, and why are the newspapers and magazines being so mean to me? In the end, Tremblay’s defence is that he was Chauncey Gardner, and it is all too plausible. “My trust was betrayed,” he said. “I take full responsibility.” About time. For half the time he’s been mayor, every article written about the City Hall he claimed to be running could have carried the headline, YOUR TRUST IS BEING BETRAYED. YOU NEED TO TAKE FULL RESPONSIBILITY.

Meanwhile across the river in Laval, the villagers with torches have almost caught up to Gilles Vaillancourt, who looks to be another deal altogether. The province’s anti-corruption squad lately amuses itself by raiding Vaillancourt’s office or his home or his other home or his other other home every few days, and by all accounts what they’re finding will make it hard for Vaillancourt to credibly swipe Tremblay’s Sgt. Schultz defence.

Tremblay’s speech began with a few paragraphs about the very good economic performance the city has posted during his tenure. And it’s true: if you survive the horrifying drive into town under visibly crumbling overpasses, and as long as a sinkhole doesn’t swallow you up while you’re strolling along a key commercial artery, Montreal looks healthier than it has at any point during the quarter-century I’ve known the city. Nobody will think of that when they think of Tremblay after today. His own astonishing, dogged blindness saw to that.