Can Canadians go outside or not? Trudeau is at odds with some experts.

Politics Insider for May 5: The Liberals open up a lead in the polls, interpreters are reporting more workplace injuries and Nunavut is back to zero coronavirus cases 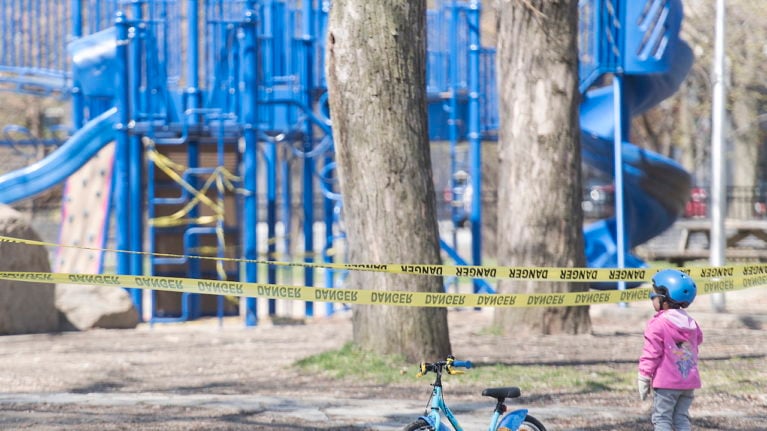 A young child stands outside the entrance to a playground in Montreal, Sunday, May 3, 2020. (Graham Hughes/CP)

“I know the weather is getting nicer,” said Prime Minister Justin Trudeau, speaking to the country yesterday from the front door of Rideau Cottage. “We still need to be extremely careful and not just for our seniors but for everyone around us. So don’t go out unless you absolutely have to.” That #StayHome message directly contradicted the more hopeful advice last week of Dr. Bonnie Henry, one of Canada’s most popular public health officials. “Please, go outside,” she said, noting the risk of transmission outdoors is low enough that a little fresh air, provided all required precautions are taken, is no problem at all.

The PM’s urge for restraint followed a weekend in the nation’s capital that saw recreational pathways packed with socially distanced Ottawans who felt the warmth of the sun for the first time in months.

In his May 4 briefing to Canadians, Trudeau—a well-documented Star Wars fanatic—didn’t make a single reference to a day so treasured by his fellow sci-fi geeks. (Read his full remarks here.) Theresa Tam, for her part, embraced the annual pun-fest in two languages. “May the fourth be with us,” she said as she concluded remarks at her daily COVID-19 presser. “Que la force soit avec nous.”

Why are the Liberals not playing Trudeau to his strength? The PM is nearing 50 press conferences outside his home since the onset of the COVID-19 pandemic. But even if he’s on TV every day, Andrew MacDougall writes in Maclean’s, Trudeau isn’t really doing the thing—”his freakish ability to connect”—that should help him lead a still-anxious country.

The Prime Minister who loves to road trip across the country connecting with Canadians on listening tours isn’t reaching out much at all. The Instagram feed is muted. The Facebook live function is stuck regurgitating the daily media availability. The tools of modern communication—and connection—aren’t being made to work their Trudeau magic from quarantine.

The perils of Zoom: Parliamentary interpreters, the unsung bilingual heroes who keep meetings humming in both official languages, are reporting a “dramatic and exponential increase” in workplace injuries since Parliament went virtual. They’re suffering acoustic shock, a consequence of poor quality audio, which mimics the symptoms of a concussion. They’re also experiencing tinnitus and mental fog. Since March 31, interpreters have reported more incidents than they did in all of 2019. Watch their testimony yesterday at the procedure and House affairs committee.

Doing his homework: Playing “I Spy” in the background of MPs on virtual calls offers endless entertainment to parliamentary nerds. Tom Lukiwski, a Conservative MP who chairs the Commons committee on government operations, revealed some recent reading material sitting on his desk. Any readers who can name that book should please let us know.

Your newsletter correspondent talked to a whole bunch of government sources—including Employment Minister Carla Qualtrough, a top bureaucrat at the Canada Revenue Agency and bureaucrats working the phones—for a behind-the-scenes look at how the government pulled off the miraculous, flawed Canada Emergency Response Benefit that has paid out billions to Canadians desperate for cash. Said Qualtrough: “I could never have imagined that I would go down in history as the minister with the highest unemployment rates or the most Canadians out of work during a crisis.”

It wouldn’t be spring in Ottawa without election speculation. Philippe J. Fournier‘s latest analysis in Maclean’s illustrates the growing Liberal lead over Conservatives in the federal horse race. The latest poll aggregation looks like this:

The Liberals are projected at an average of 184 seats, almost double the total of the Conservatives. The Bloc holds its own in Quebec with 32 seats. The NDP and Greens remain near their 2019 election results.

That widening advantage has various right-leaning corners of social media—and apparently a bunch of Tory MPs—predicting the PM will be overtaken by opportunism sometime later this year, even if an election to pounce on positive approval ratings could fall in the middle of a second wave of coronavirus. Place your bets now?

Justice Minister David Lametti yesterday appointed Sandra Wilkinson to the B.C. Supreme Court. Your newsletter correspondent’s bias favours anyone from his hometown of Scarborough, Ont., making it in the world. Wilkinson, who grew up primarily in the country’s best suburb, later served the LGBT community as a lawyer in Vancouver. She also practiced law in California. She and her spouse, Gayle, live in Vancouver’s West End.

Canada’s dominion carillonneur, the prolific player of the Peace Tower’s cacophonous bells, has been quiet since the pandemic shut down most of Parliament Hill. Andrea McCrady broke her silence with a tribute to Nova Scotia on April 24, and she’s back today at noon with a 45-minute show that honours Canada’s liberation of the Netherlands 75 years ago. McCrady will once again flex her muscles on Friday, when she’ll mark the same anniversary of Victory in Europe Day. If you happen to be strolling by from a social distance, you’ll no doubt recognize some of the tunes.

Patients, zero: Remember Nunavut’s first case of COVID-19, announced last week in Pond Inlet? Well, turns out that was a false positive. Canada’s largest territory, the last to report any cases at all, is free of confirmed infections.