Can Conservatives really reach out to young Canadians?

If Kevin O'Leary wants to win over young voters, he may want to borrow from the Liberal playbook on economic issues

Conservative leadership hopeful Kevin O’Leary insisted, in a recent interview with Maclean’s, that the “only path” to victory for his party in 2019 is to draw more young voters into the tent. “You can’t win a majority mandate unless you get back 60 per cent of the votes between the ages of 18 and 35. It’s a fact,” he said. “The party must decide which of the candidates can appeal to that demographic.” O’Leary argues that he is that candidate, having built a relationship with young voters by way of the screen through his TV presence on Shark Tank and Dragons’ Den.

But reaching the Prime Minister’s Office on the backs of young voters is a difficult—and in many ways, bizarre—strategy for a would-be Conservative leader. “Frankly, their chances of winning the next election do not hinge on how they do with young people,” says Frank Graves, president of the polling firm Ekos. “They would probably prefer an election where young people did not vote as much, which I think has been a strategy.”

At the most basic level of electoral politics, O’Leary is set for an uphill battle. “There is a general sense—not just in Canada but around the world—that younger people tend to be more small-l liberal and older people tend to more small-c conservative,” says Ian Holliday, a research associate at the Angus Reid Institute. In his organization’s final horse race poll before Election Day, the Tories sat in third place among voters under 35, with 22 per cent to the NDP’s 23 per cent and the Liberals’ 43 percent.

On top of these broad right-vs-left leanings by age, young people vote in much smaller numbers than older people—something that makes the traditional Conservative base of older voters a thing of envy for other parties. It also further handicaps O’Leary’s apparent plan to chase the youth vote. According to Elections Canada, 18 per cent more 18- to 24-year-old voters turned out in 2015 than in 2011, and 12 per cent more 24- to 34-year-olds cast ballots (there were modest increases among all other age groups). But that benefited O’Leary’s declared nemesis, Prime Minister Justin Trudeau. “Unless they were not telling us the truth in that final horse race poll, we can say with a good deal of certainty that the bump in turnout among young people also disproportionately benefited the Liberal party,” Holliday says.

A couple of weeks before the election, Angus Reid also asked voters, “Is there a party you could NEVER support in this federal election?” Among those under 35, the Conservatives drew the most antipathy, with 45 per cent. Next was the Bloc Quebecois with 39 per cent, followed by the Liberals and New Democrats tied at 16 per cent, and the Green party at 14 per cent.

Angus Reid asked: Is there a party you could never support in the 2015 federal election?

Asking people about the ideals they hold dear helps to illuminate the disconnect between young voters and the traditional Conservative banners. Angus Reid has found a majority of the under-35 crowd believes we should encourage cultural diversity, while older voters lean heavily toward saying minorities should make an effort to fit into Canadian society. Younger citizens are also more likely to advocate for greater acceptance of LGBTQ persons, while Canadian pride and a deep emotional attachment to the country are stronger among older people. “There is some conflict between what we have seen being the core principles of the Conservative party and what young people tell us in this values survey that they really value and where they stand,” Holliday says.

Ekos has found similar trends that make O’Leary’s party a tough sell for this group. “Things like traditional family values would have almost no relevance for young Canada,” says Graves. “So the degree to which the Conservatives present themselves in that kind of traditional conservatism is actually going to make it extremely challenging to make progress with young voters.” 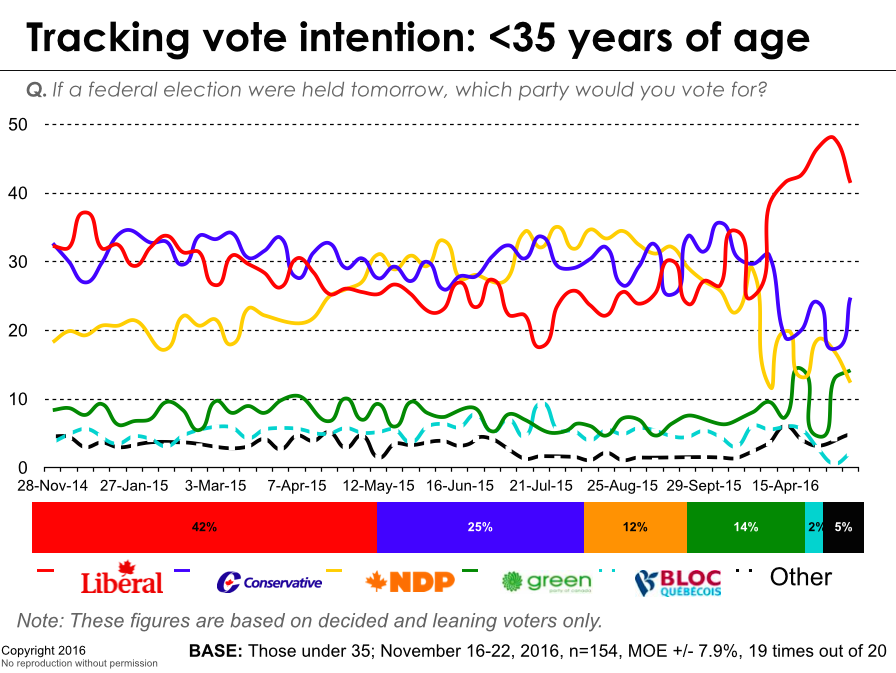 What young adults do care about is a labour market that’s left them feeling battered and burned, with the creeping suspicion that what benefited their parents and grandparents is leaving them behind, Graves says. “The dominant challenge for many young people is, how do we get an economy that works for them?” he says. “None of them feel (that’s) happening right now, and frankly, the evidence is it’s not.”

If O’Leary wants to woo those young voters, it could be that the best way to do so is to somehow carve off and own some of the fighting-for-the-middle-class territory where Trudeau and the Liberals have firmly planted their flag.