In year-end chat, Trudeau says middle class success is key to preventing anger from boiling over

By Joan Bryden and Jordan Press, The Canadian Press December 21, 2016 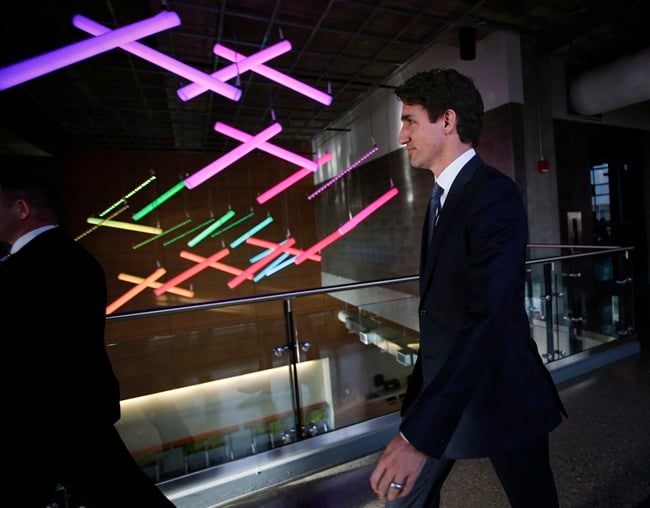 Prime Minister Justin Trudeau arrives at an event at the Southern Alberta Institute of Technology Polytechnic and tours a lab there in Calgary, Alta., Wednesday, Dec. 21, 2016.THE CANADIAN PRESS/Jeff McIntosh

OTTAWA – Justin Trudeau says his government’s focus on bolstering the middle class is aimed at insulating Canada from the kind of populist rage that is fuelling political upheaval elsewhere around the globe.

And affordable housing will be central to his approach in the coming year.

In a year-end roundtable interview with The Canadian Press, the prime minister acknowledged that Canadians are not immune to the anxiety that is fuelling anti-globalization, anti-trade, anti-immigration and anti-government sentiment around the world.

Among other things, he said, Canadians are worried about job security, retirement security, and their children’s economic prospects.

Trudeau said that feeling of anxiety is not unique to Canada, pointing to Britain’s impending departure from the European Union, the rise of populist and nationalist parties in Europe, and the turn that the American election took.

The key to preventing that rage from boiling over here as it has elsewhere, Trudeau said, is to ensure that middle class Canadians feel they’re getting a fair share of the benefits from economic growth.

“In the choices we’re making, that’s the direction we’re taking and it’s a little bit heading off some of the issues being faced around the world right now where there is a lashing out at institutions for having failed. And what we see is when people lash out at policies that create growth, and you eliminate growth, not only do the wealthy suffer, but everyone else suffers even more.

“So there’s a careful line we’re trying to walk to demonstrate that growth that includes the middle class is really the only way to get out of this challenging context around globalization that we’re facing.”

It’s the same message Trudeau delivered almost three years ago at a Liberal convention, long before the impending backlash against globalization was on most political leaders’ radar. At the time, he warned that three decades of support for the “growth agenda” based on free trade would crumble because the original promise of prosperity for all hadn’t materialized.

In his first year in office, Trudeau’s attempt to head off the anti-globalization backlash here included billions in new infrastructure spending in a bid to create jobs and boost the sluggish economy, a more generous child benefit, and a cut in the income tax rate for middle-income earners while simultaneously boosting taxes on income over $200,000.

In the year to come, Trudeau indicated the government’s plan includes investing heavily in affordable housing, including finding ways to drive down the cost of housing for low-income Canadians.

Navigating around the rising tide of anti-globalization and economic anxieties has been top of mind for senior civil servants since before Trudeau took power just over one year ago.

Canadians, especially those in the middle class, have done well based on traditional government markers, reads a report from early 2015 to the deputy ministers’ committee on social policy. After-tax income as of 2011 was at an all-time high, the incidence of low-income was at an all-time low, and the country was also among the world leaders in terms of intergenerational social mobility, a measure that determines the degree to which a child’s earnings can be explained by their parents’ earnings.

But there were signs that all was not well.

The deputy ministers were told Canada’s social safety net — created to meet post-war economic needs — was feeling the strain from a fast-changing economy: fewer full-time jobs, more part-time work, changing family structures and an aging workforce. The documents say younger families were facing “declining returns from work” because of mounting financial pressure from student debts, child care, and the need to save for education and retirement.

“I believe this is a key source of the angst that has been picked up in public opinion research among the ‘middle class’ and others. It’s less about how they are actually doing and more about the pressure they are feeling and the insecurity coming from the sense that something will have to give,” reads a copy of the speaking notes to the committee chairman.

So where is help to come from? The speaking notes say neither the federal government nor the provinces were particularly well-placed to take on more spending responsibility, and governments couldn’t expect “work or family” to pick up the slack.

The documents obtained by The Canadian Press under the Access to Information Act show that officials talked about whether to tweak existing programs or plan for a worst-case scenario.

Asked about the future of the social safety net this week, Trudeau pointed to housing, suggesting that putting and keeping people in homes is a key first step. He called affordable housing a “fundamental building block that leads towards people being able to succeed.”

Trudeau’s social development minister, Jean-Yves Duclos, has also said that the employment insurance system might require an overhaul to become simpler to navigate and more flexible to meet modern demands.